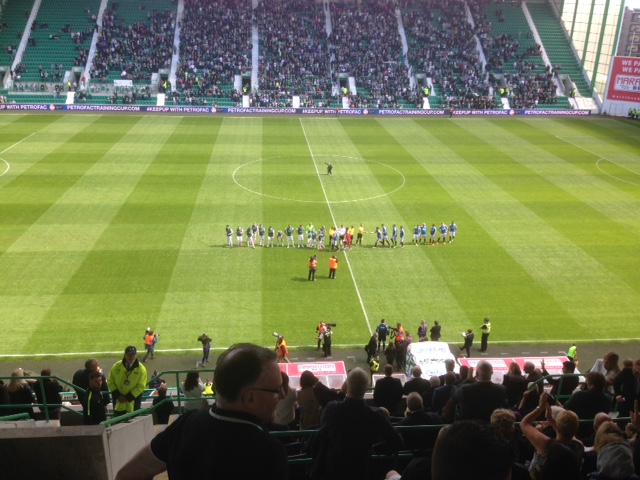 Hibs’ season started with a comprehensive 6-2 home defeat to fellow Championship contenders Rangers at Easter Road this afternoon. To make matters worse, Dominique Malonga and Jordon Forster were both forced to go off with injuries.

The big talking point amongst the Hibs’ fans was the omission of Scott Allan who had to settle for a place on the bench. The news was greeted by the ‘glass half empty’ brigade as confirmation that he will be playing his football in Glasgow this season, whilst the optimists in the crowd believe that Head Coach Alan Stubbs is saving his star player for the league campaign.

Once again, supporters hoping to see a new face were disappointed as only keeper Antonio Reguero, who was listed as a substitute was not at Easter Road last season.

Hibs started brightly and should have taken an early lead when Lewis Stevenson set up Malonga but the striker’s first time effort flew well over.

The home side however took a deserved lead in the 12th minute when Sam Stanton picked up the ball on the half way line then drove forward before firing an unstoppable left foot shot into the corner of the net.

Holt then went close for the visitors but at this stage Hibs were dominating possession.

Just before the break however, Rangers struck twice. The first came from a superb free kick from the impressive James Tavernier after a dubious award from Willie Collum then just on half time Martyn Waghorn added a second from close range after a cut back from Holt.

Waghorn made it 3-1 within a minute of the restart with a fine effort from an acute angle after latching onto a long clearance.

Defender Forster was then forced to go off with a hamstring injury and was replaced by Scott Allan who received a standing ovation from both sets of fans.

Jason Cummings pulled one back from the penalty spot in the 59th minute after Wilson brought down the youngster inside the area but Hibs hopes of a comeback were dashed within seconds when Andy Halliday curled a left footed strike from 25 yards into the top corner of Oxley’s net.

Rangers made it 5-2 in the 76th minute after Miller tapped the ball home from close range following a Nicky Clark cross from the right wing.

Lewis Allan went close moments later then Gray had the ball in the net from a Stevenson cross but his effort was ruled offside.

Miller grabbed his second and Rangers sixth in the 81st minute, tapping in from close range after a fine Barrie McKay cross.