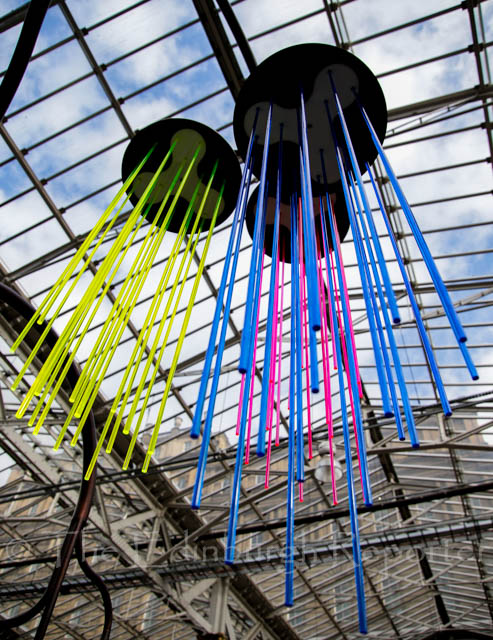 ‘To me, Edinburgh is a city equally at home in the worlds of fiction and of reality’ Director Sorcha Carey is launching her fifth – and the city’s twelfth – Edinburgh Art Festival at Dovecot Studios; it may be Edinburgh’s youngest, but it’s also now the largest annual festival of visual arts in the UK.

Over one hundred artists are involved, with exhibitions, events and commissions occupying over thirty city-wide venues; from Picasso and Escher to Dennis and Debbie Club, the Festival seeks to support artists at all stages of their careers – artists working in all sorts of media, from traditional painting to improvised vocal acoustics and street interventions.  Sorcha said: “We may be entering into our adult years, but we still have that bit of attitude and teenage energy that all good festivals should have.”

So where do fiction and reality come in? One of the Festival’s main themes is The Improbable City, which takes its inspiration from Italo Calvino’s 1972 novel, Invisible Cities. Calvino describes a fictional conversation between Kublai Khan, emperor of 13th century Mongolia, and Marco Polo – an exploration of the nature of cities, how they are formed and how they work. For The Improbable City, the Festival has commissioned seven artists, each of whom conjure up imaginary worlds, ‘worlds or spaces at the limits of the probable…Worlds which are distinctly ‘other’, yet sit in close relation to our own..’

Artist Charles Avery unveiled the first of these encounters this morning at Waverley Station; it’s a bronze sculpture of a rather unusual tree. Avery is best known for his project The Islanders, works from which were seen in the National Galleries of Scotland’s recent GENERATION exhibition – the project is dedicated to describing the inhabitants, flora and fauna of a fictional island, and that island’s park is filled with artificial trees and shrubs, an expression of the islanders’ refutation of nature. So Avery’s new tree, (which can be seen next to Platform 2) with its colourful dangling ‘branches’ reminiscent of a weeping willow, is part plant, part sculpture, part temple. New works in the Onomatopoeia project will also be on view at the Ingleby Gallery.

Other Improbable City participants include Quebecois video and installation artist Julie Favreau, Mexican illustrator and inventor Ariel Guzik, and vocal artist Hanna Tuulikki, whose SING SIGN: a close duet is a ‘vocal and gestural suite’, which she will perform in Gladstone’s Land and other closes of the Old Town.

Dovecot Studios themselves are hosting the work of two outstanding artists. In Kwang Young Chun’s fascinating AGGREGATIONS we see beautiful large scale sculptures constructed from tiny interlocking packages – these little parcels are made from traditional mulberry paper or Hanji and tied with mulberry string. In melding such a traditional Korean symbol with the Abstract Expressionism he studied in the US, Chun seeks to reconcile the divide between the ideals and the reality of the American dream. (The artist was represented at the launch by his son).

A Life in Colour, meanwhile, offers a retrospective of the career of the celebrated textile designer Bernat Klein; Klein’s fabrics were used by Chanel and Dior, but painting was always the driving process behind his designs, and in the 1970s he commissioned Dovecot to make ten tapestries based on his impasto technique. The pieces exhibited today exemplify Klein’s sumptuous and – for the 1950s – almost revolutionary use of bright colours and texture.

Historic art features just as much as the contemporary stuff in this festival – it’s not all installations and performances, wonderful though these may be. At The Queen’s Gallery Scottish Artists 1750-1900: From Caledonia to the Continent will bring together paintings, drawings and miniatures collected by monarchs from George III to Queen Victoria, whilst the City Art Centre’s Scottish Art: People, Places, Ideas showcases important pieces from its huge collection – which includes works by the Scottish Colourists, the Glasgow Boys, Joan Eardley and Alan Davie. Other partner exhibitions feature Roy Lichtenstein (Modern One), Lee Miller and Picasso (Portrait Gallery) and MS Escher (Modern Two) – and as Sorcha points out, the ups and the downs, the closes and the pends of the Old Town can feel very like an Escher print at times.

From Philippa Barlow’s major solo exhibition set at The Fruitmarket Gallery to Toby Paterson’s Thresholds at Edinburgh Sculpture Workshop and John Chamberlain’s stunning metallic sculptures at the Botanics, the Festival spreads far and wide throughout the city – and beyond, to Jupiter Artland’s sculpture park in West Lothian, which will provide the backdrop to works by Tara Donovan and Samara Scott. Whilst some venues are well-known Edinburgh establishments – modern photography in the shape of Bailey’s Stardust is at the Scottish National Gallery, Photography: A Victorian Sensation at the National Museum of Scotland – many smaller galleries and pop-up spaces will be taking part too.

Edinburgh is an eminently walkable city, and to help you get around the Festival invites you to join a free walking tour; just turn up at its new central hub, The Kiosk in Blair Street, at 2pm any day Saturday to Thursday and off you go. On Fridays there are special Walking Lunch Tours – for £4 you get a brown bag lunch to snaffle as you see the sights (these tours must be booked 24 hours in advance). They’ve also got Explorers maps and guides specially for families with children.

Whisper it low, but there are a few other festivals going on in the city this summer… and Edinburgh Art Festival is keen to build conversations with them. The Festival Detours programme is a series of live performances in galleries by people like Carol Ann Duffy, Phill Jupitus and Man of Moon (who? only Edinburgh’s latest uber cool band, that’s who..). Meanwhile on 13th and 20th August, Art Late will see evening openings with live music, artist talks, tours and performances at venues such as Talbot Rice Gallery, Collective and Dovecot Studios. I’m slightly relieved to see that this festival’s idea of late closing is 10.30pm… you young things can party the night away in the Grassmarket all you like, I need to be home for Book at Bedtime. But before I go, I’m sure you’re agog to know one thing…. just what is the Dennis and Debbie Club – can anyone join? All I can tell you is, it involves ‘despair, personal torment…and the absurd’. To find out more, you’ll need to get down to CodeBase in Lady Lawson Street. As Henri Matisse apparently said, ‘Creativity takes courage’.

Most venues should have brochures, and you can also see the programme online here. For daily news, events and updates, visit The Kiosk, 9-11 Blair Street.