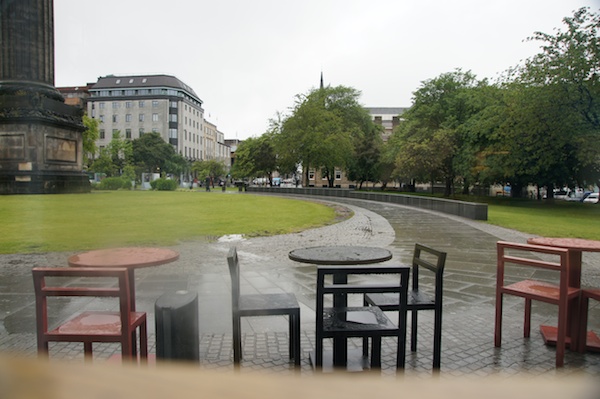 Roddy Smith took up his new position at Essential Edinburgh earlier this year. Now that the newness of the position has worn off we met him to find out what plans the organisation has for the future of the city centre.

The organisation keeps the city centre clean and attractive and organises events to bring more people to the centre to help the businesses there.

We interviewed him on the balcony at Harvey Nichols overlooking St Andrew Square.

The Edinburgh Reporter chats to Roddy Smith from Phyllis Stephen on Vimeo.

Born in Edinburgh, he attended Aberdeen Grammar School, Brunel University and Heriot Watt University. Following a degree in Physical Education and English he taught at Robert Gordons’ College in Aberdeen for three years before coming back to Edinburgh to complete a masters degree.

He has worked at sportscotland, and Cricket Scotland since then, latterly as Chief Executive. In this time the business grew significantly in size and profile with the sport winning many European and Global development awards. From a small staff of 7 and a turnover of £500K, the business grew to 26 full time staff and a annual turnover of over £2M by 2014.

On the field the Scotland side was transformed from an amateur team to a fully professional side competing against all the top sides in the world whilst winning major competitions and taking part in both 20 over and 50 over world cups.

During his time at Cricket Scotland the national team held many high profile matches around Scotland for up to eight thousand spectators and in front of live television cameras. He formed many successful partnerships with the private and public sector to support Cricket Scotland’s membership and teams.

Roddy was appointed as the new Chief Executive of Essential Edinburgh in late 2014 and took up his post in March 2015, taking over from Andy Neal.