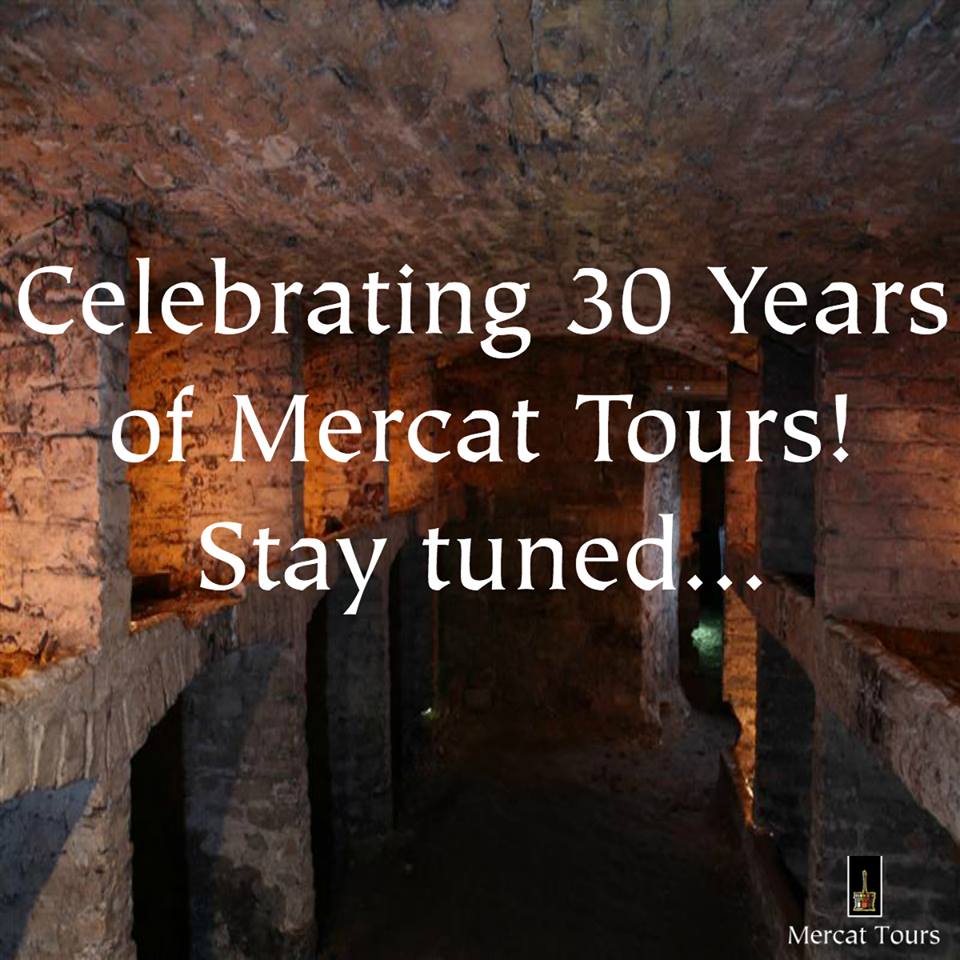 ‘We didn’t have indoor toilets in Edinburgh; we didn’t have outdoor toilets either. We had buckets in which people did their ‘nastiness‘ and threw the contents out of the nearest aperture. When thrown from the topmost windows, it could splash back up as far as the second floor…’

There’s quite a bit of ‘nastiness‘ in the Royal Mile if you know where to look. No, not the tourist shops and themed restaurants – although you’re certainly entitled to your opinion… From persecution to poo, it’s all here – or at least it was – and Alex, our guide on Mercat Tours’ Secrets of the Royal Mile walk, is only too pleased to fill us in on the sordid details. But we start at the Mercat Cross itself; all Edinburgh life centered around it, from merchants doing business to official torturers doing torturing and executioners offering a bit of hanging for the entertainment of all. In the days when you either stayed in your stuffy (and no doubt smelly) house or got out onto the streets for a bit of a diversion, you weren’t too fussy about morals. If you were on a 17th century tourist trip, you could find a caddy here too – he’d carry your bags and show you round the streets. Alex is very good at the latter but somewhat lacking when it comes to the former; hey-ho. The current Mercat Cross is in fact a 19th century facsimile (built, says Alex, when Edinburgh was ‘re-embracing its tourist history’) and the fifth incarnation of the original. Like much of the Old Town, it’s actually newer than the New Town…but we’ll come to that. The symbols on the Cross include a unicorn, which shows Edinburgh to be a Royal Burgh – and if you’re wondering why a mythical creature is the national animal of Scotland, Alex is swift to point out that there aren’t actually any dragons in Wales.

In the 1750s Edinburgh Council noticed that London merchants had stopped hanging around the streets and moved into offices; not wanting the city to fall behind, it decided to build the Royal Exchange on the opposite side of the Royal Mile. Businessmen, however, were no less cynical then than they are now about local authority schemes; they stayed resolutely outside, and by 1818 the Council had given up and turned the Exchange into the City Chambers – an interesting way to get a nice new civic centre for themselves, you may say – though I’m sure the thought had never crossed their minds… The Royal Mile stretches from Edinburgh Castle to the Palace of Holyrood House – from the cold and drafty place where royalty was supposed to live to the much more salubrious palace that it soon came to prefer. As you’ll know if you’ve trudged up the Mound as often as I have, the Old Town is on a hill; in the 13th century it had the Cowgate on one side and the Nor Loch on the other. The loch was a bit of a midden – in fact it was a midden, as all that nastiness drained into it from buckets emptied on the north side of the High Street. Eventually it was drained and made into Princes Street Gardens, but not before they’d drowned quite a few ‘witches’ in its delightful waters. The Cowgate was equally yukky; they didn’t drain that….

The Old Town was hemmed in by the two cesspits and the Flodden Wall, which was built around the city in the 18th century. Despite all the nastiness, people carried on as people generally do; the population grew (augmented by displaced Highlanders and other ‘immigrants’ – but more about them later…), overcrowding was rife, more housing was needed – and the only way was up. Tenements of up to fourteen floors soon swayed in the gentle breezes blasting down the Forth. The lower levels were built of stone, but, as if overcrowding wasn’t enough of a fire hazard, the top floors were made of wood. Nowadays the city’s rich gravitate towards the New Town, but back then all human life had to share; the poor lived at ground level, the middle-classes (surprise!) in the middle, the wealthy in the top stone floors – and the even poorer in the wooden shacks teetering above. Buildings frequently collapsed or burnt down. In 1824 there were three devastating fires; this led to the formation of the city’s – and the world’s – first municipal fire service, and in Parliament Square you can see a statue of the man who formed it: James Braidwood, Master of Fire Engines and a ‘pioneer of the scientific approach to fire-fighting’.

After 1824 the city had had enough; most of the tottering closes and wynds were knocked down and reconstructed on a more sensible scale. The nastiness problem had been slightly improved by the passage of the 1749 ‘Nastiness Act’, which banned the emptying of those obnoxious buckets in daylight hours; it also required that emptyings should be preceded by the shouting of ‘Gardyloo!’ (gardez l’eau); if someone in the street below shouted ‘Haud your hand!‘, he was to be given time to get out of the way. Possibly. The streets were still awash though, so those who could afford it often travelled around in sedan chairs; in Tweedale Court there stands a shed in which these contraptions were stored. The rest of the population came up with its own ways to keep its feet out of the faeces; pattens – an 18th century version of platform soles – in a variety of styles – were the chaussures du jour, and visitors to the city were amazed to note how quickly young girls ran up and down the wynds and closes wearing these unstable galoshes. The rich, though, were growing restless. The walls of the city were no longer deemed necessary, and they wanted out. The city fathers didn’t want them to take themselves off to London, so they needed to provide an alternatove; the North and South Bridges were built, the Nor Loch was (eventually) drained, and a competition to design the long-mooted New Town was won by James Craig. The New Town doesn’t have any nastiness. Just banks.

Nastiness, can, of course, cover a multitude of sins. Someone who got very worked up about sin was John Knox; he converted Scotland to Presbyterianism right here in the Royal Mile, at St Giles’ Cathedral (although he wouldn’t have liked to call it that….cathedrals were for that other lot, who have bishops…). Knox died in his eponymously named house (now part of the Scottish Storytelling Centre) in 1752 – although, as Alex explains, it probably wasn’t his house, but one he had ‘borrowed’ when its Roman Catholic owner was busy with the Lang Siege up at the castle. Nevertheless, the house’s association with Knox saved it from the mass reconstruction of the Old Town in the 19th century; it’s one of the few original buildings in the area, probably dating from the late 1400s. Knox’s purported burial site is rather less impressive; he’s said to be six feet under parking space 23 in Parliament Square (previously St Giles’ graveyard).

Edinburgh is full of churches, though these days many have metamorphosed into centres of rather more earthly matters. The Tron Kirk in Hunter Square was built to house a Presbyterian congregation who got cross when Charles I tried to introduce those evil bishops; it was named after an enormous weighing machine used by the local merchants to check up on each other’s goods. It was closed as a church in the 1950s, and currently houses a Victorian-style market. Almost at the top of the Royal Mile stands another Church of Scotland relic; The Hub, now best known for its association with the Edinburgh International Festival and its rather good cafe, was originally the Highland Kirk, built to house Gaelic-speaking congregations displaced to Edinburgh by the Clearances.

After all that nastiness, it’s good to finish on a more salubrious note. In the 19th century, the Old Town courts (originally developed as a solution to the squalor of the closes and wynds) had turned into overcrowded slums; Patrick Geddes, a pioneering town planner from Aberdeenshire, decided to renovate them and return them to their original purpose, as good homes for everyone, regardless of class. A fervent believer in democracy, he moved his own family into James Court and started improving things ‘on the ground’, soon inspiring his neighbours into communal action. He was also a noted botanist, convinced of the importance of gardens, and created many of them in tiny pockets of unused space throughout the Old Town; most are still here today. One of Patrick Geddes’s mottos was vivendo discimus – ‘by living we learn’ – one that could apply equally well to Mercat, whose tours bring history to life in such an entertaining and informative way. As locals we may think we know everything there is to know about the city, but there is always so much more to discover – did you know, for example, that the Duke of Wellington’s snuff was cut with (legal) cocaine? No, me neither: gives a whole new meaning to his ‘getting pretty high up in the tree’. And Alex is full of little gems like this – here’s another one: an Englishman once blithely told the London government that the Scots ‘probably wouldn’t do anything about independence‘. The man was Daniel Defoe, professional spy and resident of Moubray House, one of the oldest occupied properties in Edinburgh. Maybe he should have stuck to fiction, or sorting his hair out.

Unfortunately I didn’t have time for the optional add-on visit to Edinburgh Castle at the end of this tour, but I’m sure those who did enjoyed it (and let’s hope nobody moved into their houses while they were up there…)

Mercat Tours offer a whole range of history walks, above and below the streets of Edinburgh (read The Edinburgh Reporter’s review of the Historic Underground tour of the Blair Street Vaults here). And if ghosts are your thing you have a choice of their ‘light-hearted look at our ghoulish past’ or the rather more chilling, adults only, Hidden and Haunted experience; the full range of tours can be seen on Mercat’s website here, and they can also arrange a wide variety of private tours for groups. And now for the extra exciting bit: on Wednesday 1st July Mercat – which was started in 1995 by four history teachers, one of whom still runs the company today – will celebrate its 30th birthday, and as part of those celebrations it’s offering free places on its tours all day! It’s strictly first come, first served, so visit their Facebook page now and find out how to book (advance reservation is required). You can find Mercat’s office at 28 Blair Street, and it’s open every day.

And here’s one last little pearl of wisdom from Alex: the Royal Mile is not a mile – it’s a nautical (or Scots) mile, which is slightly longer. You’ll be grateful for that knowledge at your next quiz night. Or when you next need to sail down to Holyrood.

With thanks to Alex, whose tour included much more than I’ve covered here, and who was not only an excellent tour guide but also an audible one, despite competition from buses and building works!