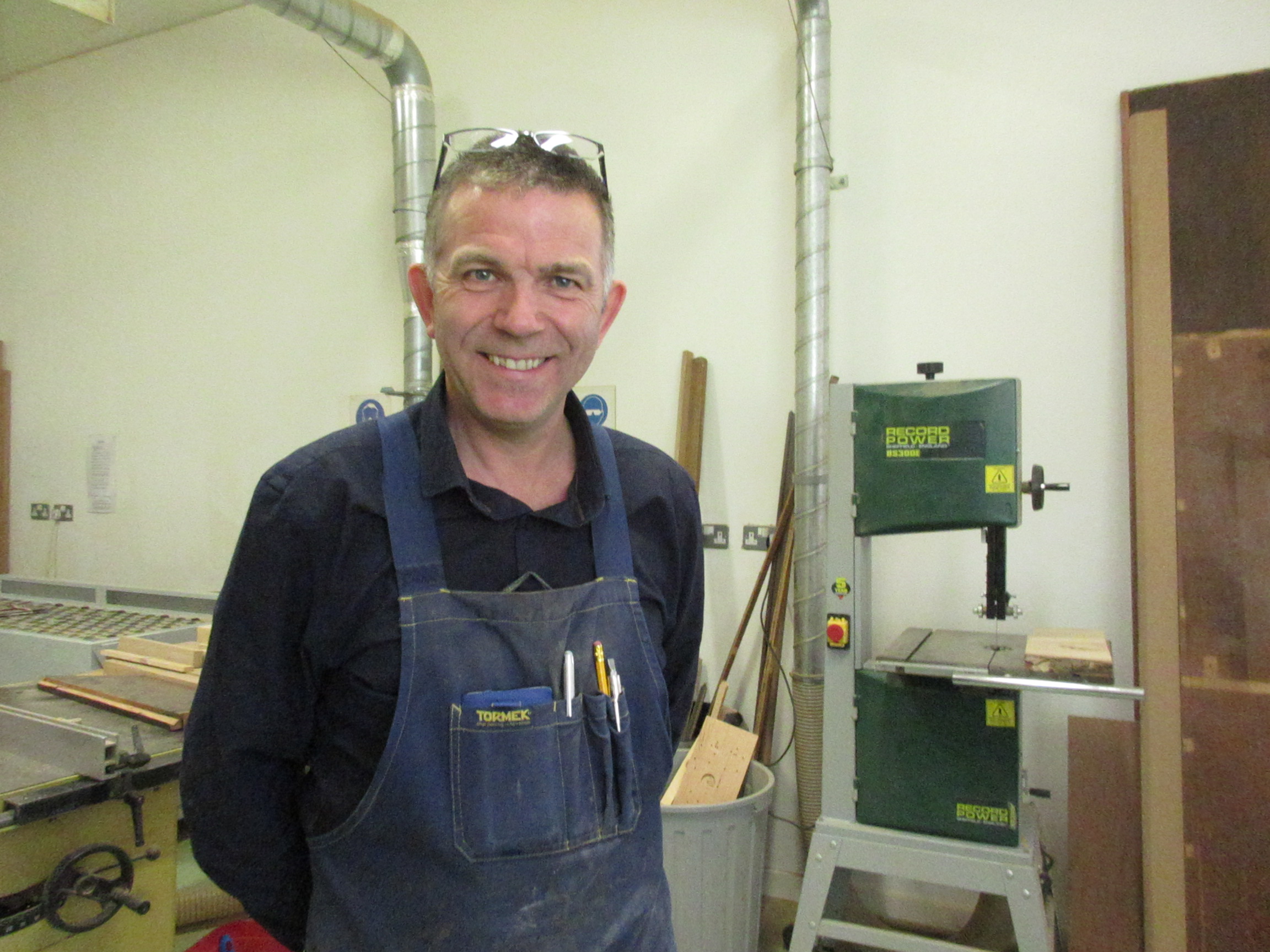 Today the Grassmarket Community Project is a thriving centre, housing not only the woodwork shop but also a state-of-the-art conference hall, cafe and tartan textiles group. The Project runs all sorts of classes and groups for its members – from cookery to art, IT, photography and sewing. Although GCP works primarily with vulnerable adults  – people with extra support needs or health issues, ex-offenders, the homeless – anyone can join, and can then sign up for classes. The GCP has come a long way from its origins as a soup kitchen; only a few years ago the old building was run down and poorly maintained, offering those in need a meal but not much else. Today the building is full of light, life and hope – there’s masses going on, people are in and out all day; there is a real sense of joy about the place. Tommy tells me how this came about.

Originally a joiner, Tommy decided he fancied a career change and moved into the care sector. He loved the work, moved up the ladder and became involved with the Edinburgh Cyrenians. Meanwhile, the Rector of Greyfriars Kirk (to whom the building belongs) was hatching a little plan; the pews were being removed from his and many other churches – people wanted to make the buildings multi-purpose, to install seating that could be moved around – what if a project could be set up to recycle those pews into new furniture? And even better, what if that project could be of benefit to GCP’s members? The Rector didn’t have to look far to find the perfect man for the job; Tommy’s been running it ever since, and says its the best job he’s ever had. He started Grassmarket Furniture in a portakabin in the Greyfriars Kirkyard, asking members from the art class that GCP was by then running if they fancied trying a bit of woodwork. The sessions grew and grew, and in the meantime funding was found to redevelop the old Kirkhouse; Gareth Hoskins Architects designed the award-winning building you see today, slotting this stunning contemporary structure into the tight space available. The atrium and hall are double-height, and on the upper floor smaller rooms, including the wood shop, are set around the hall, which had to be suitable not only for GCP events but as a high quality letting venue to provide an income stream to the project. Grassmarket Furniture now inhabits a very smart workshop, kept in shipshape condition by Tommy and his team.

On Fridays, Tommy runs a ‘beginners’ group’ for people who’ve not worked with wood before. Many people have been referred to him by other agencies, but some simply get in touch; anyone who shows commitment is welcomed. By the end of just one day, each person will have made something – a clock, a pen, a tea-light holder; it’s so important, says Tommy, to let them see they can achieve something, to be able to say ‘Well done’ to people who’ve never heard that before.  Today a new member is just finishing his piece. ‘What kind of wood is that?’ asks Tommy ‘Douglas fir’ comes the quick reply – this from someone who’s been in the workshop less than six hours; Tommy keeps them on their toes.

Once members are a little more confident, they can move on to the Tuesday and Thursday sessions; soon they are making tables, chairs and all manner of beautiful pieces, and also mentoring new beginners on Fridays – another confidence-boosting exercise. Tommy also teaches poker-work or pyrography – the art of decorating wood with burn marks – and if that sounds simple, just wait till you see some of the results. At present the group is making the awards for the Edinburgh International Film Festival, to be presented at the Filmhouse on 26th June (a ceremony that the whole group will attend); yes, the trophies that may be taken home by some of the most famous filmmakers in the world are being created right here at GCP, and having seen them I can tell you they will be cherished. There’s also a small exhibition of GCP members’ pyrographic art work at the Filmhouse throughout the Film Festival.

Sometimes even Tommy is surprised by people’s talents; one girl who’d been sleeping on the streets produced a stunning picture, freehand, on her first day at the project – she’s now running her own furniture business, exporting her work to California and Israel, and has just had her first mortgage approved. Another member who had not worked for years and could hardly speak for shyness now has a full-time job and has just been promoted.

Tommy works hard to create a ‘normal’ atmosphere, one that makes people want to come in to work – there’s lots of banter, but no swearing or bad behaviour, and people are expected to turn up on time and do a good day’s labour. He expects the trainees to take the standards of the workshop out into their everyday lives; he shows them respect, and by goodness do they respect him. The structure and order of the workshop give members something they may never have experienced before; a reason to get up in the morning and, as Tommy says, ‘to start enjoying life’. Members play an important part in team meetings too – there is no ‘them and us’ at GCP, and the whole group has been to tea at Holyrood House and, at the invitation of Baron Wilson of Tillyorn, visited the Palace of Westminster. Tommy is a not only a genius at sourcing pews, which he travels up and down the country to collect; he’s also brilliant at selling the very same wood back to the people who gave it to him. Many congregations are only too pleased to commission Grassmarket Furniture to make pieces from the pews – beautiful lecterns and altar tables for the churches themselves, and personal items for individuals. The circular seats around the trees in the Grassmarket were made here, as were the display cabinets in Greyfriars’ Kirk. There’s never any shortage of work – in fact, there’s a waiting list. When the General Assembly of the Church of Scotland was refurbished, Tommy was in there rescuing the balustrades – they’ve now been made into limited edition Assembly Lamps, each one coming with a certificate of authentication and the history of the members who worked on it. All 55 have been snapped up, many by past Moderators; at £100 each it’s what Tommy calls ‘a good bit of business’. And business is important to Tommy, because Grassmarket Furniture is totally self-funding, and he likes it that way. Not being dependent on short-term grants, he can decide how long each members stays with the group – some may need three months, others six months, some three years or more, but Tommy keeps them for as long as it takes. His goal is to build up people’s skills and their self-confidence, to help them move out into the world, ‘I take each one on a journey, and I decide when he or she is ready to move on’.

The wood workshop even contributes to other GCP projects; there are seven herb beds out in the beautifully kept kirkyard, the produce from which is used to make lip balms and soaps in herbal crafts classes every Wednesday. Sawdust from the woodwork is used in compost for the herb beds (it can’t be used for pet bedding as it may contain other debris); everything is recycled. The kirkyard is of course worth a visit in itself; JK Rowling is said to have found inspiration for her characters’ names among the headstones of the departed, and Harry Potter tours pass through daily, especially as they can also get a good look at the alleged model for Hogwarts, George Heriot’s School.

Back in the Centre, the cafe is serving up coffees, cakes and delicious healthy meals (all made on site by a team of professionals and GCP members). Tartan versions of Greyfriars Bobby are on sale, although most of the tartan is used for commissions, with the group’s work travelling as far as the USA and Shanghai. The recent Greyfriars Tartan Design Competition attracted entries from across the world. Tommy, of course, has his own Greyfriars tartan kilt and waistcoat, though I don’t think he wears them to sand down the pews.

It’s almost 4pm now and the woodworkers are getting ready to go home. When everything’s been tidied up, Tommy says goodnight to each one of the group individually, asking them about their plans for the weekend, telling them he’ll see them next week; for him that’s what it’s about, treating people with respect. Most of us enjoy that privilege every day; some GCP members have never experienced it before in their lives.

The average cost of keeping someone in care is, says Tommy, £24,500 per annum, and most will stay dependent on some sort of care all their lives, a total cost of at least £1.25 million per person. Tommy is saving that money with each person whose life he turns around, but for him it’s not about the money;

‘We don’t choose the families we are born into. These are people who have been abused, who end up lost in the world. I’ll work with them for as long as it takes to give them independence and a reason to get up in the morning. I love my job.’ A big thank you to Tommy for giving up his time to tell me about this inspirational project.

The Grassmarket Community Cafe is open 8am-4pm Monday to Saturday; it is wheelchair accessible and has highchairs and free wi-fi – as well as fantastic food and friendly staff! The Project has a programme of events to which all are welcome; the next one is a free screening of Pride on Monday 15th June at 7pm. Although many events are free, any donations that you can make towards this wonderful project will be much appreciated.

The GCP hall is available to hire for conferences, wedding receptions, corporate events, ceilidhs, theatre, etc. It has a full theatre licence and state-of-the-art lighting and sound systems (technical assistance available if required). Catering is also available, from buffets to the full dining experience. Please contact the Enterprise Manager, Alexander Glen-Bott, on 0131 225 3626 for more information, or complete the contact form on GCP’s website here.