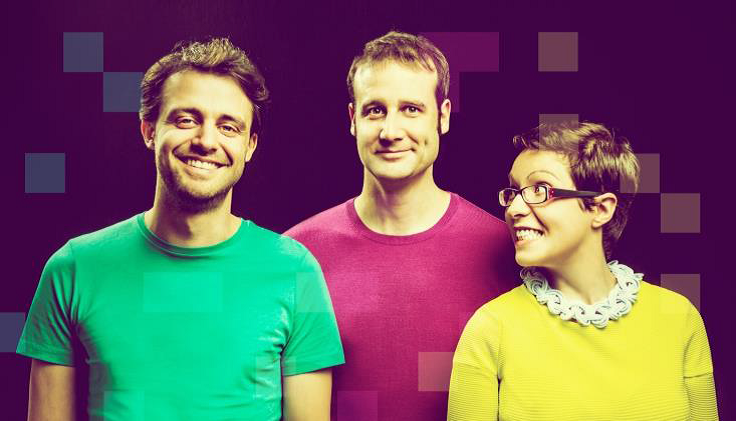 The Holy Grail of the Edinburgh Fringe is to ‘discover’ a little known act before they become a household name. In 2011 I had one of those wonderful Fringe moments of experiencing a truly original, fresh, funny, free performance in a small, hot, dark room.

This was a one-off show, without a huge marketing budget, publicised in the traditional way of flyers and word of mouth. The intimate and enthusiastic audience laughed till they were hoarse, and shared the experience of getting in on the ground floor of something great. The Something Great was, and is, The Festival of the Spoken Nerd, or FOTSN to its swelling legions of fans. FOTSN is made up of Matt Parker, Stand- Up Mathematician, experiment maestro Steve Mould, and geek songstress Helen Arney.  FOTSN fans have been delighted by the statistically significant, peer reviewed comedy in subsequent Fringe runs, and a nationwide tour.

Now FOTSN have allowed their fans to get in the ground floor once more, by using crowdfunding to launch their first DVD, “Full Frontal Nerdity”, a hilarious collection of silliness with spreadsheets, home-made toroidal vortex cannons and of course, in true experimental fashion, setting fire to things.

There is something utterly gleeful about the comedy of Festival of the Spoken Nerd. They acknowledge and embrace their nerdiness, they celebrate their geekiness and seem to have such fun on stage it is impossible to resist the infectious, intelligent fun.

“If you are going to heckle, citations will be required.” Yes, this is a safe space for the nerdiest of nerds, but you don’t have to be a Nobel Laureate to appreciate Steve Mould exciting a pickle or creating flame tornadoes with a lazy susan and hazardous amounts of lighter fluid. But fear not, for those who are sci-curious, the DVD includes further science behind the experiments in the show with ‘Smoke Ring Smackdown’, ‘Helen Smashes It’, ‘Steve Gets in a Pickle’ and ‘Matt Spreadsheets Himself’ to let you really get your geek on. The DVD also includes subtitles in English, Binary and Klingon, for the exponentially nerdy.

Full Frontal Nerdity is utterly original comedy; where else will you find the world’s first self-correcting binary scarf? They harness the curiosity and playfulness of science and scientists to full funny effect. Watch the DVD to find out the Ultimate Nerd Party trick, why everything is mathematics, and the truth at the heart of your selfies. Or better still, snap up a ticket to their 2015 fringe show: “Just for Graphs”.  Festival of the Spoken Nerd will make you warmly welcome. No matter where you fall on the Spectrum of Nerdiness, you will find acceptance, equations and smart silliness.

Yes, the geek shall indeed inherit the earth. And the OHP.

FESTIVAL OF THE SPOKEN NERD: JUST FOR GRAPHS