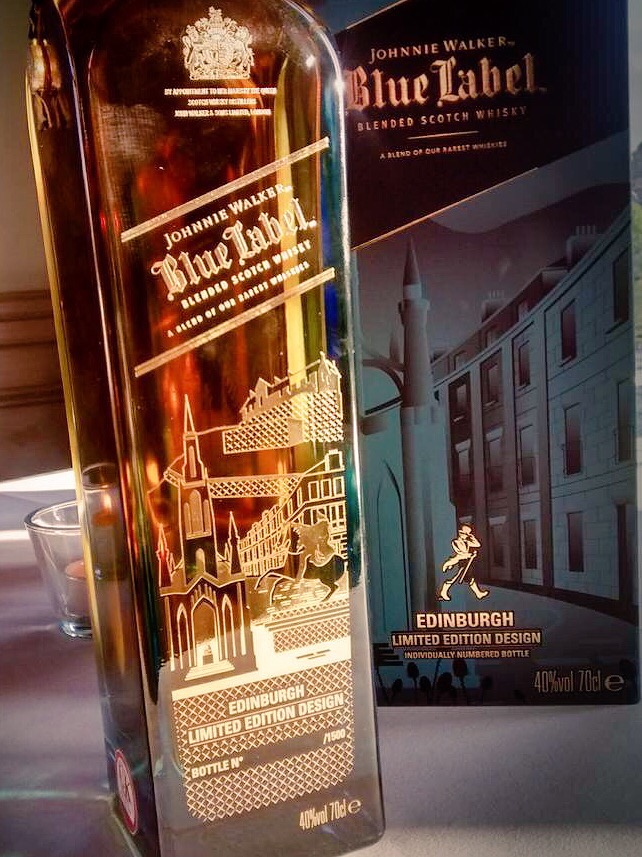 What could be better than a dram of whisky in this fair city? Well an Edinburgh special edition whisky of course!

This June, Johnnie Walker Blue Label, the leading luxury Blended Scotch Whisky, will launch two stunning City Edition bottles. The limited Edition bottles celebrate two of the UK’s most iconic cities: London and Edinburgh. Only 4,000 of these exclusive bottles have been created, with each individually hand numbered – a must-have for whisky enthusiasts and collectors alike. The bottles are beautiful with gold prints featuring the cities landmarks in all their glory.

Costing not much more than the usual Blue Label Whisky, The Edinburgh Edition celebrates the history and beauty of the homeland of both the brand and Scotch whisky. Featuring some of the greatest treasures of Scotland, the Edinburgh edition reveals a sweeping spiral of the city’s iconic monuments in luxurious gold. The bottle features instantly recognisable sights including Edinburgh Castle, the Scott Monument and the Duke of Edinburgh statue alongside the historic cobbled streets and walls.

We were invited to a sneak preview last week at The Balmoral Hotel when the evening started with a special cocktail prepared by their head barman at Scotch – the hotel’s whisky bar where over 400 whiskies await. I was hugely looking forward to my first taste of Blue Label and the special cocktail the team had created which was amazing as expected! We were treated to a fabulous dinner with a private dining room over-looking Edinburgh Castle and Princes Street.

Ervin Trykowski the Brand Ambassador gave us a very detailed potted history of the brand and Blue label bottling and I was surprised to hear that only 1 in 10,000 casks are selected to go into the blend to deliver its remarkably smooth signature taste – more on that later.

JOHNNIE WALKER BLUE LABEL has a mellow, rounded nose, with a dry smokiness we were not told which whisky in the blend this was influenced by but I have my suspicions! Despite the dy falvour, the whisky also has sweet raisiny fruitcake notes too. They recommend having a sip of iced water after your first taste which changes the taste of the whisky and intensifies the flavour. I didn’t taste everything on the notes but perhaps more practice is needed! I picked up a honey sweetness and a definite hit of sherry and an orange taste before the smokiness takes over the finish. This whisky is dangerously easy to drink!

Whether a whisky lover, collector or self-confessed British or Scottish patriot, the artistry and individuality of these Limited Edition bottles creates a unique and extra special gift. Or if that’s a bit pricey head along to Scotch in June for a dram or one of the speciality cocktails.

More about The Balmoral Hotel

Many hotels claim to have landmarks on their doorstep, few can say their doorstep is a landmark. The Balmoral is a grand Rocco Forte hotel located at Edinburgh’s most prestigious address, No 1 Princes Street. The Balmoral offers 188 opulent suites and contemporary rooms. Excellent cuisine is guaranteed in the Michelin-starred Number One restaurant or the informal Hadrian’s Brasserie. Afternoon Tea is served in the refurbished Palm Court and the hotel boasts a collection of over 400 Scottish whiskies at Scotch. Expertly blended cocktails are shaken and stirred to perfection at The Balmoral Bar and signature Scottish treatments are available at The Balmoral Spa.