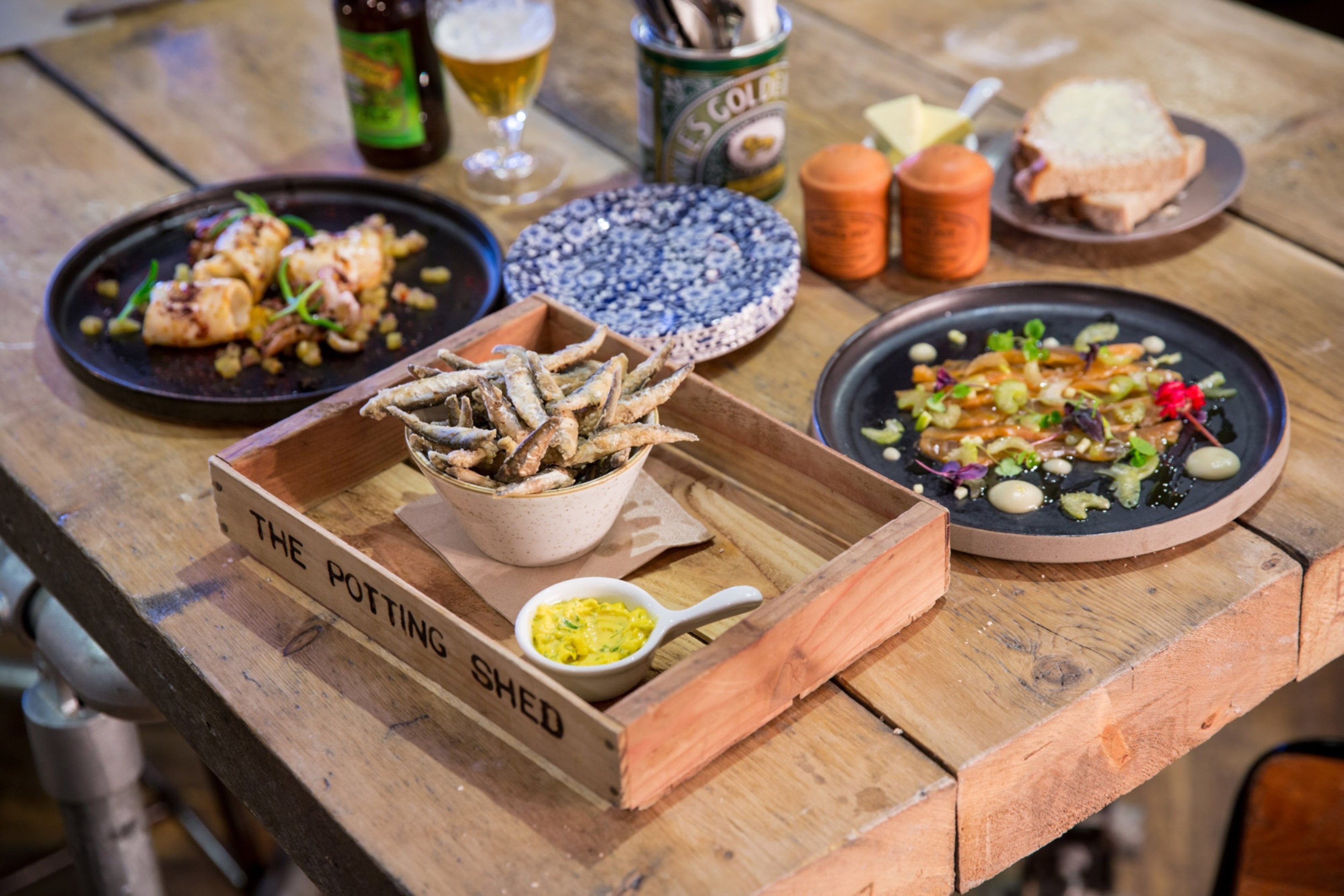 The new look Potting Shed at Potterrow in Edinburgh is run by the team behind The Sun Inn in Dalkeith and has just been awarded with one AA rosette for Culinary Excellence. The Potting Shed is now a lot more serious on the food element complete with a team of new Chefs.

Their new menu sees a retreat from the traditional ‘starter – main’ format and instead goes for a small plates approach with little plates of food a little bit bigger than tapas/starter size. So ordering two or three plates each and sharing everything is their idea of how it should work.  They feel that the new menu and restyling of the interior suits the Edinburgh food scene – Informal, sociable and fun. Here is a taster of their menu which includes a selection of nibbles, plates from the sea such as Chargrilled squid with, gazpacho salad, lemon & black peppercorn dressing, and King prawns with Chilli and Ginger, plates from the land such as Lamb Rump, wild garlic, baby turnip or Pigs cheeks, sweet and sour beetroot and side dishes AKA ground provisions, plus an amazing selection of puddings to finish. We can certainly recommend a visit to the Potting Shed after a recent outing that saw the team there accommodate 8 of us quite late on one Tuesday evening during which we ordered at least one of everything on the menu, with everyone having nothing but compliments for the food! Never mind the fact they happily offered to cater for us at the last minute. Thanks Team!

Owner, Craig Minto, commented on their recent award success: “We remodelled The Potting Shed in reaction to the Edinburgh foodie scene. To be recognised so quickly by the AA with a rosette is testament to how hard the team have worked to create something new and exciting for Edinburgh. It’s just the start of great things for this young and passionate group of people.”

The team at the Potting Shed are passionate about their food but they also have an amazing selection of handpicked craft beers and ales from across the world plus their own unique Shed cocktails. Why not try a Blood Orange and Rosemary Margarita or a Rhubarb mojito next time you’re in the area?! The restaurant is perfect as a large group and also for a dinner for two with a huge range of different food and the team offering a number of dishes to cater for food intolerances too. The restaurant is owned by the Minto family who also a range of other eateries across the UK and Spain, including The Sun Inn in Dalkeith. The Edinburgh Reporter also reviewed the restaurant shortly after the  revamp earlier this year.

Open Daily until 11pm and 1am at the weekends