All the works submitted for the popular BP Portrait Award are on show in Edinburgh this winter.

The works at The Scottish National Portrait Gallery comprise the entries in a competition organised by the National Portrait Gallery in London.  The award is one of the most prestigious international portrait competitions in the world, which this year attracted a record-breaking 2,377 entries, submitted by artists from 71 countries.  The annual exhibition, which was established in 1979 and is celebrating 25 years of sponsorship by BP, brings together 55 of the most outstanding entries, including the work of prize-winners Thomas Ganter, Richard Twose, David Jon Kassan, Ignacio Estudillo Pérez and Edward Sutcliffe.

Ganter, a 40-year-old artist from Frankfurt was awarded the first prize of £30,000 plus a commission for the National Portrait Gallery, London, for Man with a Plaid Blanket, a striking portrait of a homeless man, Karel, whom he encountered by chance outside Frankfurt’s Städel Museum.  The artist was inspired to paint Karel when he was struck by his similarity to many of the portraits that he had seen in the museum.  Ganter emphasises the dignity of his sitter, as well drawing attention to the disparity between rich and poor, by portraying Karel in a manner which, in the past, has been reserved for noblemen and saints.

The second prize of £10,000 went to Bath-based teacher and artist Richard Twose, 51, for Jean Woods, a portrait of a 76-year-old woman who was one of the subjects of a recent Channel 4 Cutting Edge documentary Fabulous Fashionistas.

The third prize of £8,000 was awarded to Brooklyn-based artist David Jon Kassan, 37, for Letter to my Mom, a touching portrait of the artist’s mother.  A reluctant subject, she was persuaded to pose by the promised gift of a painting of her grandchild and by the moving sentiments, expressed in Hebrew, which Kassan inscribed on the canvas.

Another artist’s depiction of his mother won him the £7,000 BP Young Artist Award, which is open to entrants aged between 18 and 30. Mamá (Juana Pérez), an impressive portrait which took two-and-a-half years to complete, was submitted by 28-year-old Ignacio Estudillo Pérez from Malaga.

Speaking of the exhibition, Christopher Baker, Director of the Scottish National Portrait Gallery, said: “The BP Portrait Award is rightly seen as a key moment in the arts calendar. What is remarkable is that it continues to surprise, delight and engage us, demonstrating the extraordinary vitality and variety of portrait painting globally. This year’s entries and winners are especially strong and inspiring, and I’m sure their work will give enormous pleasure to our many visitors.”

Trevor Garlick, Regional President, BP North Sea, added: “BP is a major supporter of the arts and we’re delighted to once again be bringing the BP Portrait Award to Edinburgh.  The BP Portrait Award is a fantastic competition which attracts entries from around the world.  This free exhibition showcases the 55 shortlisted entries and the wide variety means there is sure to be something for everyone.”

A number of Scottish artists are among those selected for this year’s exhibition.  Mark Mulholland studied sculpture at Edinburgh College of Art and is now an art teacher in Edinburgh.  His portrait of John Byrne depicts the celebrated artist, playwright and author (who this summer had a hugely popular exhibition of his own portraits at the SNPG) playing one of his treasured guitars.

Martin Stevenson, an award-winning artist who trained at Duncan of Jordanstone College of Art in Dundee and whose work has been seen in numerous group exhibitions across Scotland over the last 30 years, submitted a remarkable portrait of a colleague, Declan and his Panther Tattoo.

The work of Benjamin Sullivan, who studied at Edinburgh College of Art, has been included regularly in the BP Portrait Award exhibition over the last 13 years.  This year the artist submitted a portrait of his wife, Virginia Sullivan, the first painting he has made of her since their marriage in autumn 2013.

Gareth Reid, who studied at Glasgow School of Art and Florence Academy of Art, is another regular exhibitor in the BP Portrait Award exhibition and won the BP Travel Award in 2008.  Northern Bather, a portrait of his daughter, was inspired by the work of the Early Renaissance painter Piero Della Francesca.

The BP Travel Award is awarded each year to enable artists to work in a different environment on a project related to portraiture, and is open to applications from any of the artists included in the BP Portrait Award exhibition.

This year the £6,000 prize went to Edward Sutcliffe for his proposal to document the Compton Cricket Club in Los Angeles, which was formed to encourage and empower young people in one of the city’s toughest areas. The resulting work will be displayed in next year’s BP Portrait Award exhibition.

Sophie Ploeg, a Bristol-based artist who is originally from the Netherlands, won the 2013 BP Travel Award with her proposal to explore how fashion and lace was represented in 17th century art, as well as in modern applications. The fascinating results of  her visits to modern lace makers and artists, antique lace collections, 17th-century art collections and famous lace-making centres, such as Bruges in Belgium and Honiton in Devon, can be seen in this year’s exhibition. 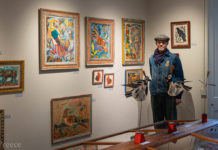