Where can you see a 1927 silent film about Zulu culture, a documentary about the Rwandan genocide and a thriller set in Guinea-Bissau? At the 2014 Scotland African Film Festival is where!

Looking Back, Reaching Forward is the title of a festival that will bring Scotland a diverse array of inspiring, innovative and challenging stories from across the African continent. The theme is inspired by the Adinkra symbol of the Sankofa bird, which means ‘reach back and get it.’ The festival will focus on retrospectives of the past – including ‘lost’ classics such as Siliva The Zulu and Come Back Africa – and explorations of the present and future. Classic and contemporary fiction, new and acclaimed short films,  insightful documentaries, discussions, classes and stunning animation are all on offer – and did you know that there is a vibrant strand of African science fiction?

The Festival will particularly feature South Africa: The Freedom Tour will depict the history, cultures and stories of the country, from early films to anti-apartheid classics and contemporary cinema. Popular culture is taking off in South Africa, with hip hop, street art, design, graffiti, music and arts festivals proliferating – but Looking Back, Reaching Forward will also address continuing challenges, such as poverty, economic and gender inequality, corruption, violence and crime.

2014 marks the 20th anniversary of the Rwandan genocide, which will be commemorated with a selection of films (Keepers of Memory, Finding Hillywood) followed by discussions. Rwandan filmmaker Eric Kabera has made a number of highly acclaimed documentaries; he has been invited to Edinburgh to present a masterclass about his filmmaking practice. Music in many forms is alive and well in Africa; Future Sound of Mzanski explores South Africa’s cultural landscape through the vehicle of electronic music, whilst Electro Chabbi documents this new populist dance form in Egypt ‘a punk spirit with a hip hop attitude, set against a furious cascade of drums, bass and electronic vocals’. Meanwhile March of the Gods: Botswana Metalheads is a ‘rockumentary’ showcasing the life of the Heavy Metal Brotherhood and the struggle of a band called Wrust – who end up on the stage of Milan’s SoloMacello Festival.  By contrast, Last Song Before the War is a lyrical road trip through Mali, the birthplace of the blues, to the legendary city of Timbuktu. Mali’s famous Festival in the Desert was silenced by occupying extremists in 2012: to date it remains in exile, as do hundreds of thousands of refugees. As part of Afrovibes, a UK-wide touring festival of South African music, theatre and dance, The Soil, a Soweto-born a cappella vocal group combining township jazz, hip hop, afro-Pop and afro-Soul, will perform live at Summerhall on 6th November. This award-winning platinum-selling trio comes to Afrovibes direct from the Apollo Theater in Harlem. Science fiction maybe isn’t something that many of us associate with Africa – but we’d be wrong. Beti and Amare tells the story of a young Ethiopian girl fleeing Mussolini’s troops; as her situation reaches a crisis, an unexpected arrival from the sky irrevocably changes the course of her existence.  Afronauts, Robots of Brixton, Jonah, Touch and Pumzi comprise a programme of shorts, Visions of the Future: African Science Fiction.

Want some light relief? Try Wasasa Comedy Night! Wasasa (‘you are not funny’!) was created in Glasgow in 2008 by Kalonde Kasengele, Katal Kasengele and Tolu Fakunle, who had a vision for using comedy as a vehicle for promoting integration and diversity. After a successful run at the Edinburgh Fringe, the three are back with their unique fusion of African and Glaswegian humour – see them at Summerhall on 4th November. Children are not forgotten – on 26th October Mara the Storyteller will run an interactive and engaging free session at the Filmhouse (booking required) and later that day the cinema shows Khumba: A Zebra’s Tale, a colourful animation for the whole family. Khumba is a half-striped zebra, ostracised by his insular, superstitious herd – he leaves his home in search of the magic waterhole where, legend has it, the first zebra got his stripes.

And speaking of watering holes….the festival has set up a hub at Summerhall, where you can enjoy food, drink, relaxation, music, chat and a great time – South African style. The Township Cafe will be open 3rd-7th November and will host a variety of different events, workshops and exhibitions. On 7th November the festival’s closing party will take place in the Cafe, an evening of dance inspired by the South African film Hear Me Move. Traditional West African performances from Afro percussion and dance group Ayawara will kick off events; Edinburgh-based Swank ‘n’ Jams will then bring you to the dance floor with a mix of afro-centric beats.

The full programme of festival films and other events can be picked up at outlets throughout Edinburgh, or seen on the festival’s website. Most films are showing at The Filmhouse, Lothian Road, through whom tickets can be booked. Other venues include Summerhall, Brass Monkey, Edinburgh College of Art, Woodland Creatures and St John’s Church Hall.

The festival is also taking place in Glasgow 30th October-9th November 2014 (and they’ve even got an African Horror Film Night!) 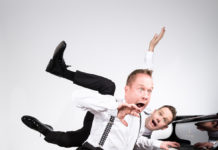 Worbey & Farrell will come and play for you 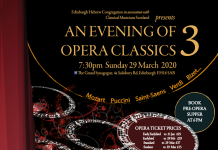 Earlybird prices available for an Evening of Opera Classics