Live streaming from the Book Festival

If you have missed out on the tickets for the George RR Martin event today at Edinburgh International Book Festival then you need not fear. There is a live streaming of the show with the Game of Thrones author by BBC Arts Online from Charlotte Square today at 8pm . More details here.

This morning Nicola Benedetti will play with an ensemble of her regular collaborators performing Brahms and Shostakovich in the first concert of BBC Radio 3’s series of Festival 2014 live broadcasts.

As the home of classical music, BBC Radio 3 has broadcast from Edinburgh International since the beginning of the Festival. The broadcasts are part of BBC Radio 3’s annual commitment to covering the classical riches the festival has on offer, and in 2006 the station expanded its coverage to include the introduction of three weeks of live morning concerts broadcast from Queen’s Hall.

Many regular shows such as BBC Radio 3’s Breakfast, the drive-time In Tune programme and The Early Music Show cover the Festival. BBC Radio 3 also broadcasts a selection of recorded evening Edinburgh International Festival concerts in the autumn after the end of the BBC Proms season, bringing the total to 22 concerts. The concerts are also shared through BBC Radio 3’s relationship with the European Broadcasting Union and other international broadcasters which last year saw the Festival’s concerts reaching listeners in over 35 territories worldwide.

This year’s coverage of The Queen’s Hall weekday morning concerts includes programmes reflecting one of the Festival’s overarching themes – the commemoration of the outbreak of World War One; Ian Bostridge reveals responses to conflict in songs by Kurt Weill and Benjamin Britten (12 August); Simon Keenlyside brings together songs from George Butterworth’s A Shropshire Lad (20 August); while Anne Sofie von Otter and Daniel Hope perform songs and instrumental music from Terezin, a concentration camp north of Prague (25 August).

BBC Radio 3 will also broadcast six concerts from the Usher Hall over a week in September– the Opening Concert with the Royal Scottish National Orchestra conducted by Oliver Knussen (15 September), Ute Lemper with Scottish Chamber Orchestra conducted by Lawrence Foster (16 September), Collegium Vocale Gent directed by Philippe Herreweghe (17 September)and the I, CULTURE Orchestra with conductor Kirill Karabits (18 September), and BBC SSO and Ilan Volkov performing Jonathan Mills’s Sandakan Threnody (19 September)– all for future broadcast in September in Live in Concert. Holst’s The Planets performed by the BBC SSO and Concerto Italiano’s beautiful programme of early music from Greyfriars Kirk will be transmitted BBC Radio 3 this autumn Jonathan Mills, Festival Director, said: “Working with BBC Radio 3 to bring the Festival’s concerts to people not able to join us in Edinburgh is incredibly valuable. We are delighted to be broadcasting 22 concerts with them this year and hope that audiences around the world will tune in to enjoy them.”

Donald MacLeod, presenter of the concerts on BBC Radio 3, said “For a few years now I’ve had the privilege of being able to sit up in the balcony of The Queen’s Hall and enjoy music-making of consistently outstanding quality, introducing the artists and their programmes to the radio audience not lucky enough to be able to be there in person. There’s always a buzz of anticipation in the hall which comes across on the live broadcast and each year this beautifully-planned series offers up a series of stellar performances. I am looking forward to another year of wonderful music and hope you will tune in and join us direct from Edinburgh.”

Just a short time ago not even the seventh son of a seventh son could have forecast that Rangers and Hearts would be kicking off their league campaign at Ibrox in the second tier of Scottish football. Read more here of Hearts win over Rangers yesterday. Read more here

We were disappointed not to catch sight of the Supermoon last night. If you did then do share your photos

This is Nasa’s version : The Queensferry lifeboat was called out twice yesterday: 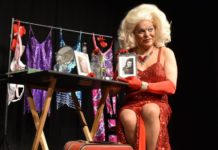