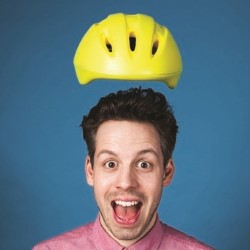 It is  a PHB Free Fringe full house at this comedy by the seat of its pants box-room venue. And they were still squeezing in them in at the off.

This Nick Hall in Michael Caine glasses and Captain Pugwash hoopy shirt top is rather very good.  Inclusive, anecdotally self-deprecating – playing the broken-hearted joker vulnerability card boldly on his sleeve. His ego-bashing decoys belie a shrewd performance structure. His honed and seamless use of slick recall with identified punters keeps every one on their toes but it is never adversarial.  Neither a Prima Donna either when it comes to hospitality riders.

His only stipulation is they provide a broken filing cabinet with ‘scrap’ written on it. And hey! Lo, there is one right next to him.

The central conceit skirts around his building up to the consequences of cycling (hence show title of ‘Helmet’) into a opened car door. He did go off on some engagingly surreal tangents that culminated in a manic coda of random philosophical questions such as why should two road chevrons be kept apart? Have they been fighting? There was a prickly riff about what the male equivalent of a woman ‘cougar’ might be.

He fixes on badger – which for reason of this publication’s wide demographic we will pursue no further.  There was a divertissement relating to his mix up with job applications to both Dixons/Curries and MI6. The latter ‘phone him up to ask where he is? ‘I  don’t want to be the one pointing fingers – but isn’t it your job to know!’

The visceral climax of the machine-gun rattling hyper-self interrogation swerves with in a moment back to his impending collision with the car door. That was canny timing and crafted comic narrative. He still has to get over being dumped by Sarah – but then again, her absence makes the audience grow fonder of his tragi-comic dilemma. Not a show for belly-laughs or riotous polemics – just damn fine, genuine intimate Fringe entertainment.

Do not go by The Fringe Programme listing.