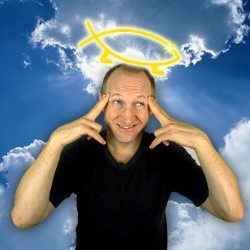 Home Culture Edinburgh Festival Fringe – Baba Brinkman: The Canterbury Tales Remixed
Share
Facebook
Twitter
Pinterest
WhatsApp
Print
Baba – Oh Really? You Are About To Be Enraptured!
The agit hip-hop rap-on-tour rhyming troubadour, Baba Brinkman, reprises his highly acclaimed 2004 Canterbury Tales Fringe debut with The Canterbury Tales Remixed at this year’s Fringe, together with some authentic medieval crucial DJ neat beat-bop beats from Jamie Simmonds. Not only that, making his wallet-shrieking Edinburgh apartment rent charges earn their worth, he is also premiering the spanking brand new show The Rap Guide To Religion. Effigies of Mr B. remain still smoldering across the US Bible-Belt following his 2009 Fringe First Winner The Rap Guide To Evolution. Allegedly he is on first-name terms with Richard Dawkins and regularly swops dinosaur anecdotes about the Noah’s Ark Creationist Zoo (near Bristol). It actually exists – ironically, evolving from a dodgy circus. The Edinburgh Reporter managed to snatch a few moments between jet-setting Mr. Brinkman’s hectic schedule to throw a rap-hazard litany of damnably intrusive questions across his tram tracks.
ER: Baba O’Riley – guru inspiration for Pete Townsend’s iconic windmill power-chording. That is a given. But Baba Brinkman – not exactly an iconic Canadian axe man moniker is it? Explain yourself without reference to guitars or arboriculture.

BB: “Brinkman” is no less dangerous! I’m a man on the brink of many things, good and bad. It’s the root word of the noun “brinkmanship” which is the guiding tactic behind my creations. As for “Baba”, it’s nickname I was given because of my Buddha-like disposition as an infant, so now I carry the name proudly, a guru for the new cult of rationality.
ER:  In no less than as many words as you wish – tell us how a Canadian guy gets to translate Chaucer’s satirical/observational masterpiece of Middle English literature in to the highly popular, almost ubiquitous contemporary genre of Rap? And making especially sure to keep in the humour and, even better, the naughty bits?
BB: Chaucer is quintessentially British and Rap is quintessentially American, so who but a Canadian could comfortably straddle that divide? We have the Queen on our money but we put things in the ‘trunk’ of our cars when going to the ‘gas station’ etc. I was raised on a steady diet of rap from a young age, and when I discovered Chaucer it felt like a rapper had time travelled back six hundred years to write his rhymes. I had to show people that connection.

ER: Your Fringe First Winner show The Rap Guide To Evolution really put you on the international stage and, in some instances on the hit-list of the loony Creationist. It has taken up a considerable part of you growing-up life. Apart from getting married and becoming a father, that is. Tell us all about it in words we will understand.
BB: Chaucer was quite the provocateur in his time and had no qualms about satirizing the foolishness that attaches itself to religion, so I figured I wouldn’t really be following in his footsteps if I just re-told his stories, I had to move to social commentary about the world we live in today, and evolution is an amazing, majestic story to tell. When the chance came along I couldn’t resist.
ER: Give yourself the excuse to explain why Socratic dialogue plays such an integral part in many of your narrative devices?
BB: Because Socrates was da man, and because we are surrounded by dialogue all the time in everyday life, it’s an accessible way to unpack an idea.

ER: So with that neatly explained – was it inevitable that you would be drawn to becoming a religious rapper?
BB: Given the deterministic nature of the universe, yes, I suppose it was inevitable. How long I remain one is still an open question though. It could lead to lionization, or martyrdom, or obscurity, in which case like any organism I’ll have to adapt.
ER: With The Rap Guide To Religion can we anticipate you drawing not only on millennia of pan-theocratic doctrinal conjecture but, of equal importance, Oolon Colluphid’s seminal blockbusters Where God Went Wrong, Some More Of God’s Big Mistakes and Who is this God Person Anyway?
BB. None of the above. I included no theology in the show because theology isn’t a guide to anything except itself. I will, however, be discussing some fascinating findings from psychology, evolutionary biology, and comparative anthropology, which shed a great deal of light on where religion comes from, what it has to offer, and where it might be going in the future.

ER: Edinburgh’s religious history makes for a turbulent, often grim and bloody grim tapestry of Crown/State and Church conflict and persecution. So, an apposite setting to premiere the show?
BB: Yes indeed, and I tell the story of one of my Scottish ancestors, Andrew Murray*, whose religious beliefs guided his life and helped him to have an impressive evolutionary impact on our species, since he has more than five thousand living descendants.
ER:To have one Fringe show may be considered fortunate; to have two Fringe shows may be regarded as carefree; but three shows? Might Off The Top, you are co-performing with your wife, neuroscientist Dr. Heather Berlin, especially being improvised, be a case of both pricking the side of your intent and vaulting ambition to boot? It will be a Scottish play, after all! BB: Off The Top isn’t entirely improvised, but it is about the question of how improvisation happens in the brain, and why we find it so interesting to watch. Maybe it is greedy to do three shows at the Fringe, but they are all so different, I’m hoping they will each find a niche audience of their own, and then cross-pollinate. When you have a chance to get a highly published and prestigious neuroscientist to host a comedy variety show with you on the fringe, you’d have to be a fool to set that chance aside.
ER: And finally, we quipped earlier about not mentioning arboriculture but, go on, tell us about your trees!
BB: I planted a million trees before I was thirty, but not for charity; I was well paid. It was a good place to mull over ideas and scheme about world domination, but ultimately I had other fields to plough. Now to the fields of Edinburgh.