What bonds a man to a bear? What prompts a soldier to mother a bear and then take him into a war? And what might a bear’s view be of humanity? Of war and politics? Of love? Which is closer to nature and to God? Man or Bear? Edinburgh author Raymond Ross tries to discover.

In Theatre Objektiv’s new production we meet Wojtek the Bear, a Son of the Sky God, a Forest Brother and a Four-Legged Human, as he travels through war and peace with his adoptive mother Piotr, a Polish soldier and Gulag survivor. Forever haunted by the fear of rejection and of desertion, Wojtek knows he is bonded with this man in a way Piotr cannot perhaps understand. Equally, Piotr is haunted by the idea that he betrayed what was his duty to love and defend.

As they re-enact their life together in an attempt to reach a true understanding of themselves and each other, we are taken on a journey from a war-torn Poland, through the Soviet slave camps and the Middle East, into bloody combat at the battle of Monte Cassino and, finally, to post-war Scotland.

Wojtek is a rapscallion of the first order, a wayward child always up to no good, as loveable as he is comic. But he is dangerous. He is wild and a soldier subject to discipline; a soldier, like any other, who smokes, drinks and wrestles with his comrades.

Thousands turned out on the streets of Glasgow in 1946 to welcome Wojtek to Scotland as he marched behind the regimental pipes and drums. He was already a legend – “The Polish Soldier Bear” – and his love of Scottish music was to become another part of that legend during his brief sojourn in the Scottish Borders.

As our show opens, these are two spirits in search of each other, longing to re-live the good times, the madcap adventures and their comic trials and tribulations; but fearful of what they know lies in store for them as they seek love and understanding – and forgiveness.

“In the post-war Polish community in Scotland, everyone and their father (Polish mothers being fewer) knew something of the story of Wojtek. I was lucky to be schooled just over the wall from Edinburgh Zoo and grew up with Wojtek as a neighbour. He’s always been a presence in my life; and very much a growing presence in recent times.

It’s some years now since I had a conversation with Tomek Borkowy of Universal Arts about writing a play for this uncanny creature, about putting him on a stage and giving him a voice. ‘How are you going to put the bear on?’ he asked. My answer was instinctive and immediate: ‘An actor. No bear mask. No bear costume. The bear himself.’

And that is the single, most important idea around which this production has been built.

There’s no doubt the real Wojtek had “human” attributes just as there’s no doubt he follows in the footsteps of bears who mothered humans, who were often honoured and even worshipped; and who were traditionally seen as a link between humankind and its Creator throughout the Northern Hemisphere for thousands of years.

Of course a bear can speak. It would be silly to think otherwise. And if a bear speaks, tradition tells us it would be wise to listen.

Why write about Wojtek? How could you not? Wojtek was, and remains, a symbol of the Free Polish Forces and of a Free Poland which only came into being when the last Soviet combat troops pulled out on the 29th October 1992. For Poland this marked the end of World War II.

Wojtek’s been waiting in the wings for some time now and I hope I’ve done him some credit.” 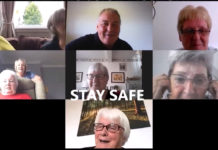