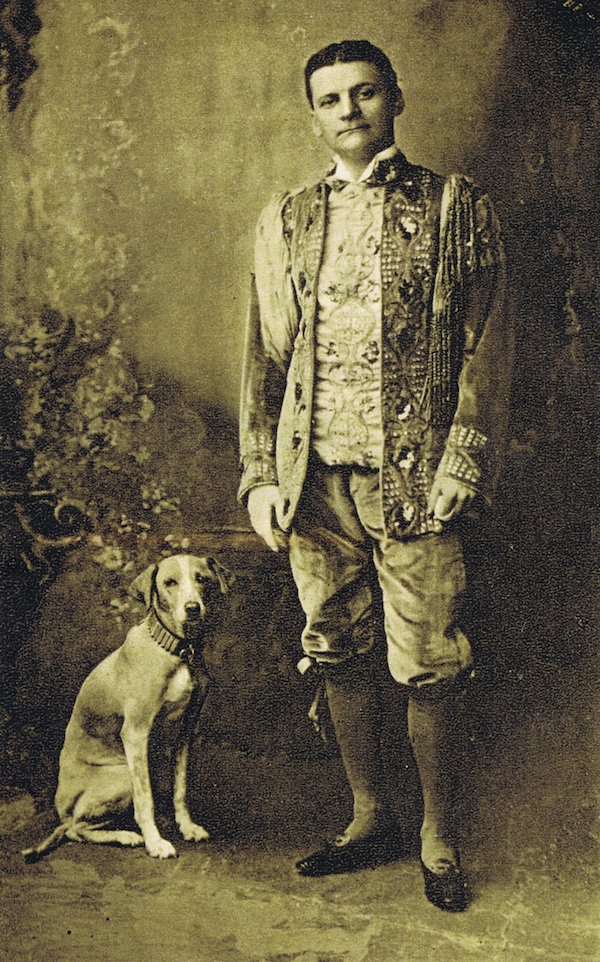 The Festival Theatre has a magic solution for those looking for an escape from wall to wall coverage of the Holyrood election results this weekend. The theatre will play host to the Great Lafayette Festival to commemorate the hundredth anniversary of the death of master illusionist, the Great Lafayette, in a fire that destroyed the Empire Theatre, now the Festival Theatre, on 9th May 1911.

Saturday  hosts a packed programme of daytime events including, The Great Lafayette Exhibition Display, Backstage Tour, The Man Of Mystery (a short film by Ian Rintoul) and the launch of a new book, ‘The Death and Life of the Great Lafayette’ by Ian Robertson.  As part of the programme Edinburgh International Magic Festival present Lewis Barlow’s A Magical Prelude, Kevin McMahon’s ‘Would Lafayette Wow The iPad Generation? ‘and Gary James’ Mini Magic School.

The main attraction on Saturday night sees Paul Daniels, assisted by the lovely Debbie McGee, pay homage to the illusionist with his show ‘A Salute To The Great Lafayette’ in which Paul will tell the story of one of the greatest magicians of all time whilst interweaving old magic with new.

Meanwhile for braver souls the  Edinburgh Secret Society will hold a seance  from the Festival Theatre on Monday 9th May – exactly 100 years to the day since Lafayette died. The seance will be webcast live around the world.

The Great Lafayette’s time and tragic death in Edinburgh a century ago were somewhat bizarre. A quick change artist, magician and master illusionist Lafayette’s early career was heavily influenced by the Chinese magician illusionist, Ching Ling Foo, who had brought his show to America with great success. Lafayette took London by storm in 1900 and soon became the highest paid entertainer in the world.

Living the lifestyle of a modern day rock star he travelled the world with his entoourage putting on ever more spectacular stage shows. His constant companion was small cross-bred terrier, named Beauty, a gift from friend and fellow illusionist Harry Houdini. Beauty wore a gold and diamond collar and was showered with expensive gifts. On 30 April 1911 Lafayette and Beauty travelled to Edinburgh in a private coach to perform a two-week season of sell out shows at the Empire Theatre on Nicolson Street. Four days later Beauty died of suspected apoplexy, and Lafayette was utterly grief-stricken. Lafayette requested for the pampered pooch to be buried at Piershill Cemetery. Permission was only granted with the proviso that when the time came Lafayette would be interred there too. Fate was to take a hand and ensure that this would happen a lot sooner than Lafayette could have envisioned.

On 9th May 3000 spectators packed the Empire Theatre for Lafayette’s spectacular show which culminated in his trademark finale –  ‘The Lion’s Bride’, an exotic illusion of Oriental splendour set in a Persian harem, which required a real lion, a horse and a cast of faithful performers. The lion paced restlessly in a cage while fire-eaters, jugglers and contortionists performed. A young woman in Oriental dress walked slowly on stage and entered the cage. When she was inside, the lion roared and reared up ready to pounce. The animal skin was then suddenly ripped away to reveal The Great Lafayette who had mysteriously changed places with the beast.

At the end of the act a lamp caught fire. The audience, accustomed to unusual effects, were slow to recognise the danger and thinking that it was part of the act remained in their seats. The rapidly-deployed fire curtain ensured the crowd managed to escape without harm, but when the fire curtain was lowered the cast were trapped on stage. It took three hours to bring the fire under control, and eleven people died, including members of the orchestra, stage hands, a midget in the act called Little Joe and Alice Dale, a tiny 15-year-old girl who operated a mechanical teddy-bear.

Early the next morning a charred body, dressed in Lafayette’s costume, was found in the rubble near a horse and lion and was taken to be cremated. Two days after the tragedy dumbfounded fire officers discovered the ‘real’ body of The Great Lafayette. It transpired that the first body had, in actual fact, been that of his body double.

The streets of Edinburgh thronged with spectators on 14th May 1911 as the real Great Lafayette’s ashes were carried in a coffin through the streets of Edinburgh to Piershill Cemetery, where they were buried alongside his recently deceased pet. Lafayette’s grave, with memorial stones to Beauty and The Great Lafayette, can be seen to this day on a grassy mound just inside the Portobello Road entrance to Piershill Cemetery.