The Open Eye Gallery is now exhibiting paintings and sculptors from three British artists between 22 April 2011 and 10 May.

The Philip Reeves exhibition will look back on the London-based  artist’s five decades of work in two spheres:-painting and printmaking.  Reeves has a long list of accolades and worked as the head of the printmaking department of The Glasgow School of Art in 1970 and was the President of the Royal Scottish Society of Painters from 1998-2005.

He has stated that his work is, “A distillation of form, colour and shape, depicting territory both urban and rural. Items can become displaced, but there is usually a relationship within an architectural framework.”

As well as Reeves’ work, paintings from Sylvia von Hartmann are on display in Abercromby Place.

Edinburgh-based Hartman mainly paints and draws on stained glass and works with water colour and pigmented wax. The subjects of her paintings comes from her own life and her particular interest in nature. Her paintings frequently depict moons, birds, flowers, fruits and trees. Sculptor Michael Snowden forms figures and portraits in bronze. As well as teaching art in London, Snowden has strong connections to Edinburgh as he taught in the Capital between 1964-1995 as a lecturer at Edinburgh College of Art. 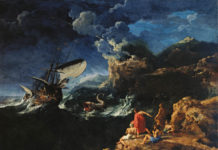