Edinburgh’s appeal as one of the world’s most sought after short-break destinations has been given a new boost with the arrival of a magnificent new holiday property. So now when you have relatives coming to stay in the city, you can offer them alternative accommodation with a difference! Of course even if you live in the city it might be a nice place to party for a day or two.

Old Observatory House, which commands breathtaking views across the Capital from its lofty position on Calton Hill, has been lovingly restored by the City of Edinburgh Council and listed buildings specialists,  the Vivat Trust. The trust delivered the internal restoration using volunteer support and local tradesmen.

Designed by James Craig, the famous “architect of the New Town”, in the latter part of the 18th century, the house was originally home to the city observatory. It was last lived in during the 1980s, by which time it had become very dilapidated and pervaded by various types of rot. By 2002, the building was on Historic Scotland’s Buildings at Risk Register.

Councillor Deidre Brock, Culture and Leisure Convener for the City of Edinburgh Council, said: “The house has been beautifully decorated and fitted out by Vivat Trust and its lucky visitors will be extremely comfortable, while enjoying the best views in town. I’m so pleased to see this important historic building brought back into use after such a long time. This exciting new chapter for Old Observatory House marks an important milestone in the regeneration of Calton Hill, following on from the very successful restoration of the Nelson, Burns and National Monuments in recent months as part of the Twelve Monuments Restoration Project.”

Laura Norris, Vivat Trust Director, said: “Old Observatory House is an extraordinarily special building in a simply stunning location. We took part in Doors Open Day last autumn to show people what we had done so far, and the interest was far greater than we expected; we had about 2000 people through the doors. We are delighted that people will now have a chance to stay in the building as well – to fully enjoy it – and to visit throughout the year on planned open days. We are sure that its revitalisation will help trigger further regeneration on the hill.” Old Observatory House sits adjacent to the Old City Observatory, which was built by William Playfair in 1822.

Information about the Old City Observatory and other Calton Hill monuments and attractions can be found on the new Edinburgh Museums and Galleries website. 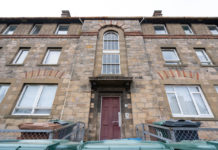