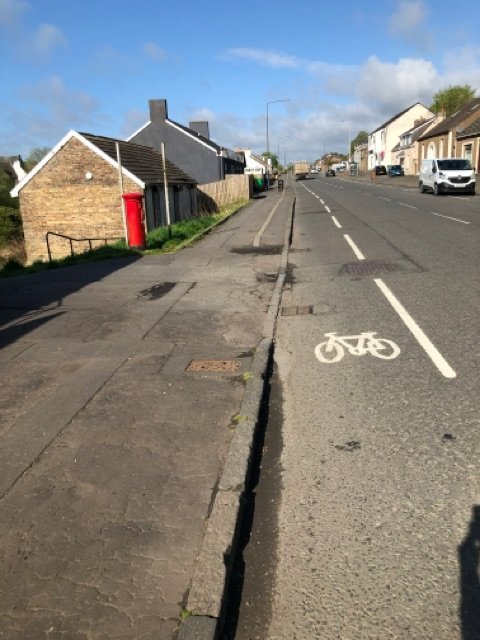 West Lothian residents have asked ‘what’s the point of cycle lanes’ amid complaints that they are so often used by parked cars that they are ‘not fit for purpose’.

The council is currently asking for public feedback on road safety issues as part of its consideration of the future Spaces for People programmes.

And, in Blackridge at least, many have raised the question:  “What’s the point of having cycle lanes? ” – especially in areas when there is a separate cycle track running alongside the road.

Independent local councillor Stuart Borrowman, writing on his social media pages, asked for constituents’ views, and said: “The council is consulting on retaining and formalising these or removing them.”

He pointed out that many cyclists don’t use them and added: “Cyclists are among the many complainants who’ve contacted me.

“Cycle lanes, white lines with a bike logo on the pavement side of roads, are advisory only. Motorists largely ignore them, and they are entitled to do so.

“I can think of several locations in my ward where refreshed white paint would contribute to road safety and which would be a better choice.”

More than  sixty constituents commented on his Facebook page, most agreeing. One pointed out that even the Highway Code gives alternative advice, saying: “Not fit for purpose. The new highway code law should be consulted as they now suggest they position themselves in the middle of the road.”

Another said: “As a driving instructor, who lives in Blackridge, I don’t see any benefit from the cycle lanes. As many have already said, there are too many cars parked in them for bikes to use them safely. More effort needs to be taken on all road markings. It’s very difficult to see some of the direction markers on the road which causes confusion to people who don’t know the roads.

Others pointed out that whole cycle lanes may work well in towns they have limited effect in villages and on narrow country roads.

Many cyclists prefer a nearby dedicated cycle path – less than 200 yards from the road through Blackridge as a safer route away from cars. One said::  “We have a fantastic cycle path which is a much safer option.”

Another said: “I’d much rather be off the road altogether and use a dedicated cycle lane…painting white lines doesn’t stop drivers zooming close by…I try and give cyclists as much room as possible (and slow down) but when I’m out cycling this rarely happens”

Findings from the consultation will be reported back to council on 27 June.

Spokes, the Lothians cycle campaign was contacted for comment.