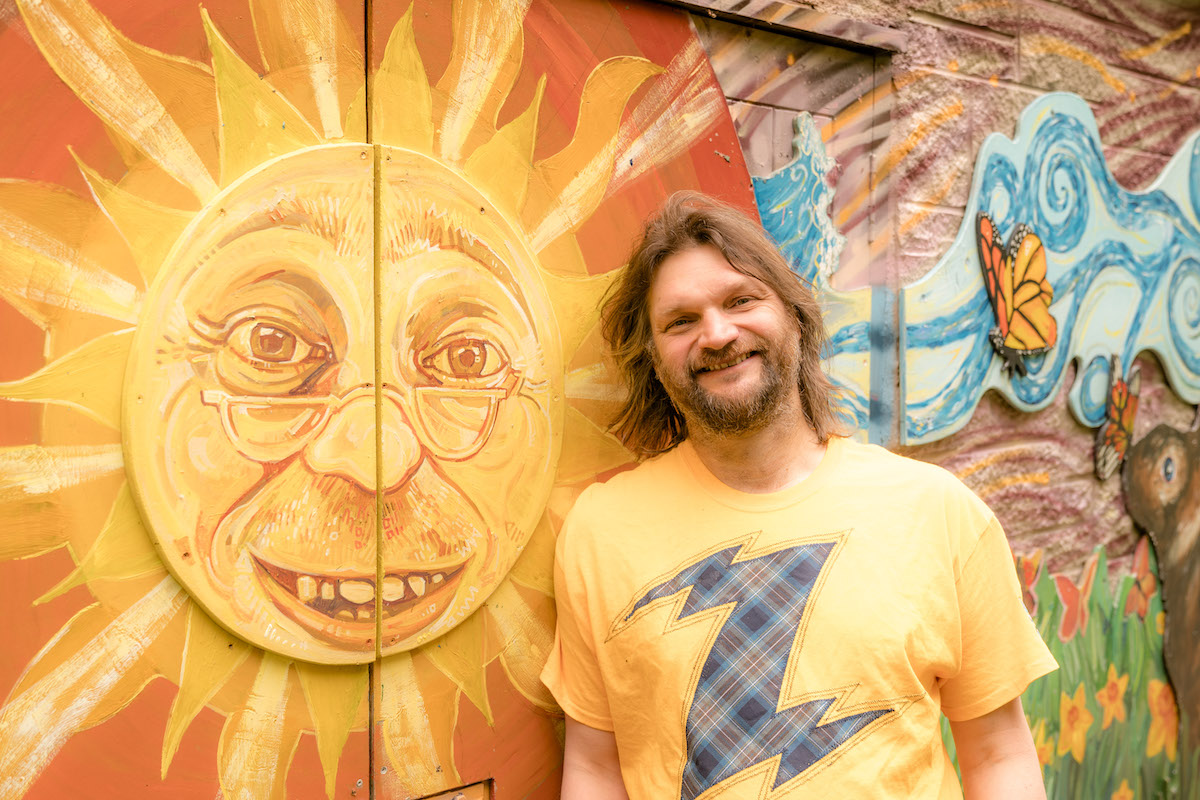 The newest mural in town is in Braidburn Valley Park where a fabulously colourful design has brightened up a corner of the park at an electricity sub station.

The formerly drab building which is still in use, now displays paintings of nature and animals, reflecting what visitors might find nearby.

Mural artist, Chris Rutterford, is a ‘Southside boy’ who is well known for his beautiful artwork in the Colinton Tunnel, and now he has done it again.

Paul Bailey chair of the Friends of Braidburn Valley Park explained how the project came about. He said: ”The building looked a complete mess until the electricity board did paint it over in grey. Then some ”artists” applied some graffiti – reasonably pleasantly – but obviously it needed a professional artist to make it more attractive.”

In early 2021 Andrew Swann, a previous Chair of FOBVP, came up with a proposal for a radical facelift. Inspired by Chris Rutterford’s transformation of the Colinton Tunnel the proposal was for murals on the substation, depicting images related to the Park, with the community involved in their creation. Previous chair of the Friends, Margaret Bruce, was also involved in grant applications always a necessary part of any project like this.

Mr Bailey continued: ”We got a grant from the council and so, using some of our own funds we were able to get it done. Chris contacted the school and pupils painted parts of it there. You can see most of it is painted on hardboard Then Chris and Andrew laid it out in a car park to see how it would look when placed on the walls.

“I like the badger best I think, but I also love certain details like the tiny rabbit on the rear added just recently.”

As this is a working substation the decoration on the doors had to be worked out so that they can still open easily.

Mr Bailey also explained that Chris was interested in decorating the walkway into the park from Greenbank Crescent but local residents did not readily agree so that has not happened.

Any future stages of the project will depend on more grant funding and the Friends are happy to apply for that for some other parts of the park and hopefully involve some younger children next time.

The work sits high above the valley and is visible even from the A702 which passes the park’s eastern boundary.

Chris explained that the Friends of Braidburn Valley Park (FBVP) commissioned him, knowing that he had already made his mark in Colinton.
He said: ”The Friends liked the community aspect of it. In the tunnel we worked with primary school children and also some teenagers. We have aspirations to do more here but wanted to start with a bang and show the quality of what we would like to make, so this mural was made along with the Advanced Higher pupils at Firrhill. I had worked with them previously and the teachers know i am a benevolent hirer who will come and get the best out of the kids. Tracy Graham their teacher basically doesn’t quite know I managed to get three months of work out of the kids in three days.

“We were there for a good time, not a long time. Professional drive and energy and being serious about having fun is one of my things.

“i have always lived in the Southside, starting in Currie and Colinton. So a lot of the areas i am changing are local to me.
“I think what I really do is bring soul to places, and this is a beautiful park but they had allowed this building to become dilapidated. Then they point at the kids and say its their fault. But I have to ask what have they done for 40 years?”

The Friends asked Chris to do some ”blue sky” thinking before the project began. He believes the park could become an attraction in itself with a walk entering from either end. But he said : ”The entrance from Oxgangs should be changed to become more inviting like the one at the Morningside end. There is another building there at that end which is covered in graffiti. This park should have theatre and it should have soul.”

Chris has not only directed and designed the hugely popular Colinton Tunnel, he also decorated a four feet tall hare for the Big Hare Trail which was sold to raise funds for Leuchie House in East Lothian. The eleven sculptures were sold and raised £115,000 for the tenth anniversary of the independent charity which provides respite care for those with neurological conditions. Chris’s hare called Hare Tae Golf raised £22,000 of that total.

He is also almost at the end of a project for Reading Football Club where he is creating a visual fan mural, with portraits of the Royals football supporters on the outside of the West Upper Stand at the Madejski Stadium. Fans paid to be included in the mural and sent a photo for Chris to create the portrait from. Chris said he also has another tunnel in his future but we shall have to wait and see when his plans become more definite.
Chris says quite modestly that he is not the story but just someone who is tasked with reflecting the story with his artistic skill.