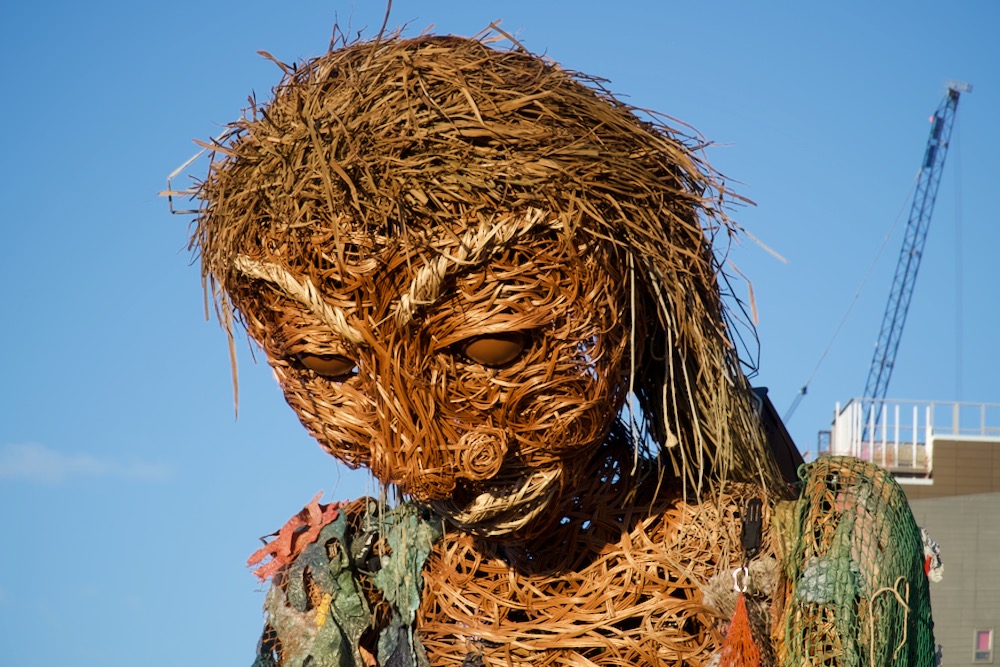 I was lucky enough to be in Dumfries when STORM stormed through the town  last weekend.  She stands ten metres tall and is worked by a team of eight puppeteers, dressed in yellow oilskins, pulling ropes to bring her to life. Even her eyes move as she gazes down on us with an air of contempt.

Her mission is to ask what we are doing to save the planet – its climate, its land and its seas. She has set an example by being made of re-cycled materials and has embarked on a tour of 11 towns and cities.  She began last year on the banks of the Clyde in Glasgow where the UN’s conference on climate change opens in ten days’ time, just as she arrives at her final destination, the Royal Botanic Gardens in Edinburgh.

We’re very conscious that the eyes of the world will be on Scotland as we host the COP26 conference. Some 20,000 delegates from around the world are coming to Glasgow and leaders will be signing up to their latest climate change pledges. The Scottish Government has set what it calls a “world beating” target of being carbon neutral by 2045, five years ahead of anywhere else.

I can’t help thinking it’s a sign of our Scottish guilt-complex and we are trying to make amends for being the birthplace of the Industrial Revolution. We have a lot to atone for, having burnt coal and oil from the 18th century onwards. So the government has pledged to ban the sale of new petrol and diesel cars by 2030, plant 18,000 hectares of new woodland each year, restore our peatlands, invest £180m in hydrogen and carbon-capture technology.

But actually, we have not yet realised the scale of the challenge. Our carbon emissions targets have not been met for the last three years. Transport emissions have only gone down by 0.5 per cent since the base year of 1990. Are we really prepared to switch to electric cars and electric heat pumps in the next eight years?   And how will we help households who just can’t afford them?

We suffered a great disappointment this week when the UK government pulled the plug on our flagship carbon capture project at St Fergus gas power station near Peterhead.  For the second time, UK government funding has been postponed. Instead, the first phase of large-scale carbon-capture in Britain is to be at projects on the Humber and near Liverpool. It’s a blatantly political decision by the Johnson government to direct spending to the “red wall” constituencies in England.

On Monday, we were reminded of the more immediate danger of heating our homes with gas when a house in Ayr was completely destroyed in an explosion, almost certainly caused by a gas leak. The family of four inside were seriously injured and rescuers said it was a miracle any of them survived.  The blast could be heard up to four miles away.

On the Covid front, school pupils, who are returning to the classrooms after the half term break, have been told they must continue to wear masks for the rest of the term. They had hoped to be mask-free while at their desks but the number of Covid cases is still stubbornly high at 2,700 a day, with over 800 in hospital and around 20 deaths a day. More senior doctors have been warning of a winter crisis in our hospitals.  About a hundred army personnel has been called in, so far, to help in four health board areas. And Covid passports are now in force for night clubs and major sporting events.

lStabbings are not unknown in Glasgow but the killing of a 14 year old boy standing on a station platform last Saturday afternoon has shocked us all. It’s not clear exactly what happened but a 16 year old boy has been arrested. The usual tributes have been paid to the dead boy by his friends and his school’s head teacher. Community leaders have sought to console his family. But it’s yet another case for consideration by Police Scotland’s Violence Reduction Unit. The policy being pursued is to view knife crime as a disease, with the cure lying in education, health and social work.

Finally, a 35-metre humpback whale has beached on the waterfront in Dundee. It’s a steel model created by artist Lee Simmons in his workshop in Littlehampton, Sussex. It arrived by sea on Tuesday, after a four day voyage. Its mission – like STORM’s – is to remind us of the value of our environment.  And, again, it’s an act of atonement for the whaling industry which saw some 600 sailors set sail twice a year in 12 whaling boats to plunder the seas off Orkney and Greenland for 130 years until the First World War.

It’s easy for us now to condemn the coal industry or the whaling industry for damaging our fragile planet. But it’s only recently dawned on us that the Earth’s resources are finite and burning fossil fuels is leading to disaster.

Let’s hope we can finally agree on what we are going to do about it at COP26 in Glasgow next month.