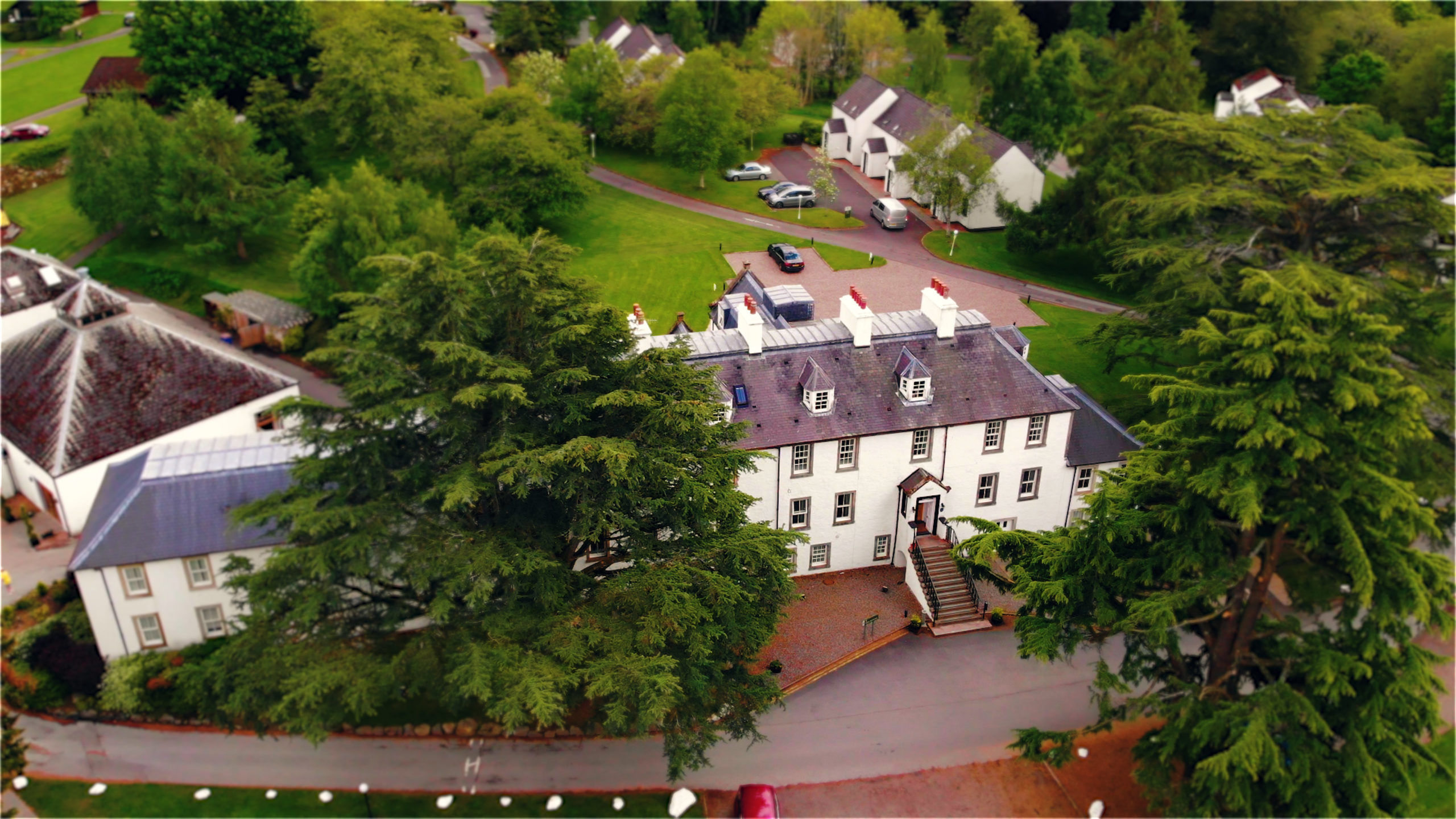 I’ve never been one for doleing out parenting advice (preferring the flying from the seat of my pants to the studious approach to motherhood) but I will offer these words of wisdom to you: when checking your kiddywink’s school calendar before booking holidays it’s a good idea to make sure you’re consulting the school in Edinburgh, rather than one of the same name in, say: Hampshire…

Anyway, a grovelling email to the understanding headteacher later, my daughter and I find ourselves heading to sunny Aberfeldy. Edinburgh was blanketed in haar the morning we departed, making the Queensferry Crossing an atmospheric route out of the city. Of all the roads out of Edinburgh, crossing the Forth always feels the most relaxing and cathartic journey to remote climes.

We’re headed to Moness Resort, somewhere I’ve bizarrely followed on Facebook for years but never visited. One appeal is that involving a journey of only one and a half hours from the city centre it’s pretty accessible for a two night trip, and another being the journey is beautiful: even the motorway has its picturesque points. Despite road works and the dreaded average speed cameras the Kingdom of Fife seems to be perpetually fond of, we felt as if we’d arrived in no time at all. With the spectacular scenery on the last leg of the journey, the holiday had truly arrived before we did.

Like the availability of Prosecco, apps are spreading like a variant. I downloaded Moness’s app when booking and was given an option to check in remotely and get a code to the key lockbox outside our allocated lodge. Being from Edinburgh and enjoying the hobby of shaking my fist at Air B&B lockboxes, I decided to check in the traditional way, however upon entering the driveway the app welcomed me to my destination; which I was rather charmed by.

A warm welcome, a map and key later, we’re heading to our cute wooden lodge house; my daughter being thrilled by the reception party of a family of adorable bunny rabbits. Ok they were wild, or perhaps livid, at my car invading their peace, but we saw them so many times during our stay we thought about naming them.

Our lodge, named “The Birks” is cosy, comfy and well equipped. A lot of thought has gone into the gorgeous picture windows making the most of the glorious setting we’ve found ourselves in. We’re staying in a pet-friendly lodge and the place is so spotless you’d never imagine so much as a goldfish in a bowl had been in it. Bunny family are looking through the window at us as if to seek approval for our accommodation. We give them the thumbs up and seemingly satisfied they run under my Ford Fiesta.

On the day we arrived it was understandable to seek shade. We’d hit peak Scottish weather: sun but no midges. Fancying a cool down I whipped out the app and booked us a session in the pool which, due to Covid, had restricted numbers. The pool was kidney-shaped, something that used to baffle me when I was my daughter’s age, flicking through the Thomas Cook brochure. I suppose what kidney-shaped pools achieve is they put off insufferable show offs who want to swim lengths rather than the slovenly splashing about the rest of us partake of while holiday swimming. The water was lovely and I had a chance to watch the action from the poolside hot tub.

A tasty and light lunch on the Bar Terrace later, I ask my daughter how she might like to spend the evening? “Relaxing,” she tells me: reassuringly not swapped at birth. We play board games, chat to our new rabbit pals, lolloping through the long grass, and order a takeaway from the restaurant.

Naturally staycations in Scotland can be akin to going back to simpler times, and having not a clue how to work the remote control, I introduced my daughter to watching what’s on telly as and when it’s on. It was quite the yesteryear experience, she found. However, despite advance warnings of rural patchy service, the Wi-Fi was impeccable. Good for us, we’re fair coverage travellers.

After a peaceful night’s sleep we wake up to birdsong. Although Moness seems the sort of place unfavoured by stag and hen dos, its certainly mating season for our winged chums. Despite being vocal in their morning shenanigans an organic awakening beats the radio alarm clock any day.

We head off on a mere eight minute drive to Highland Safaris for a morning of nature appreciation. It’s a lovely set up with men in kilts going about, much to the appreciation of a couple of mums from Essex we chat to. Our first experience is meeting the resident Barn Owl, Ossian. Our guide Tony reveals to us that despite their collective pronoun being a parliament, owls aren’t particularly bright. Ossian gives our morning bird alarm a run for their money as she’s possibly the most vocal owl I’ve ever met. Tony informs us that this is because she was hatched in a flat in Newcastle so see’s herself as a Geordie human and not an owl, perhaps the Vicky Pattison of the avian world. Although we can’t tell what she’s saying, I suspect it might be asking for directions to the tanning salons and nightclubs of Aberfeldy.

The barn we meet Ossian in also has lots of displays of the year round cycle of the red deer, who seem to be more gearing towards the intelligent side, as they clearly know owl viewing means feeding time is coming up. Although safely behind a barrier it’s a real thrill to get so close to these majestic animals, particularly as their antlers are still at the growing stage and incredibly cute and furry.

Kilted Tony stands among them, although come autumn he assures us that he wouldn’t be on that side of the fence, as the stags become incredibly hormonal and aggressive, enjoying covering themselves in their own excrement and urine in order to attract a mate. If the hinds object to that they should see what’s on Plenty of Fish in Edinburgh, just saying…

Tony is an excellent guide and has made learning about these amazing animals a lot of fun for both the grown ups and children alike. I ask him if he’s a ‘local’? “Third generation, so getting there!” he replies. We have a spot of lunch in the centre’s cafe and I’d recommend stopping at Highland Safaris for this alone, the food was fabulous. I notice that venison is on the menu so ask the waitress if it’s ‘local’? The answer is yes local but not “on site” local. A relief seeing as we’ve just seen a baby deer born that very morning. You don’t want to be chowing down on Bambi’s mum right in front of him.

The sun is still out after lunch so we indulge in a spot of gold panning and come away with a booty of nuggets of fool’s gold and a selection of crystals. Every bit of treasure found is thrilling for the children but something of a competitive sport for the grown ups. Highland Safaris is definitely somewhere you could enjoy the best part of a day as they also have bike hire and trails for you to try out.

We head back to Moness for another relaxing afternoon and enjoy dinner in the restaurant where the menu is tempting and the service more than friendly. All the staff at Moness have been lovely and some travel daily all the way from Perth to work there.
We definitely could have stayed at Moness for longer, as depending on who you go with it could be as jam packed a stay, or relaxed as you wished. I’d want to return with other families as there is so much room for the children to play and great food and spa treatments for the grown ups. Despite the resort being full on our stay, at times it felt like we were the only people there.

After another soothing slumber and a quick goodbye to our hoppety chums, we stop of at the Birks of Aberfeldy for a walk. The trees and waterfalls make for a cooling respite from the sun. I even get a chance to sit with one of my favourite chaps for a while.

“ Bonnie Lassie will ye go to the Birks of Aberfeldy?” Yes Rabbie, a thousand times, yes! 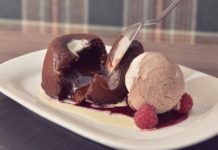 Head Upstairs for your festive meal