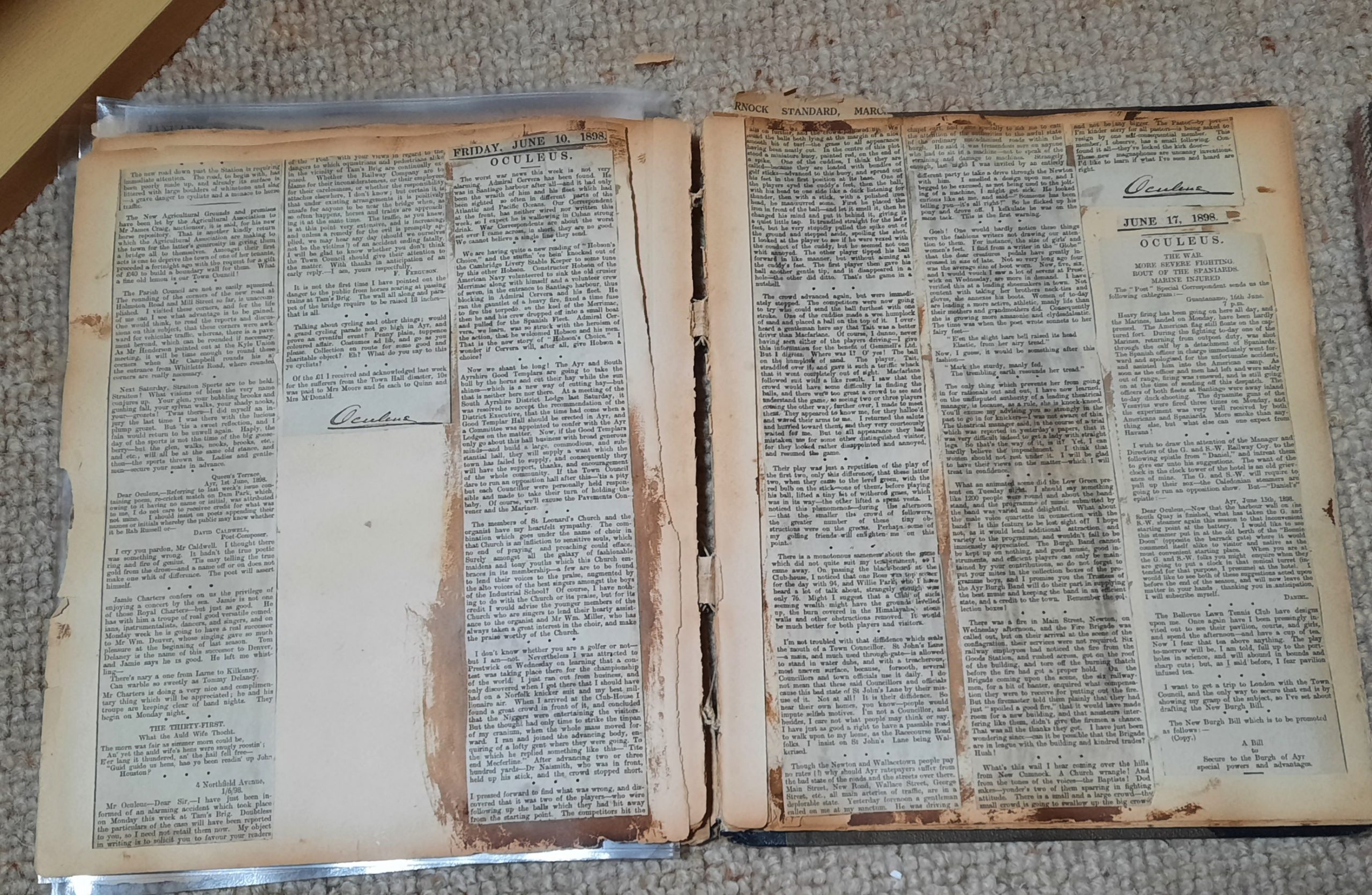 Carolyn O’Hara who lives in Prestwick, where she works as an English tutor and freelance writer suggested a story for us with a real Edinburgh link. She has had poetry, articles and short stories published, as well as a social history book, about a relative who lived and worked in Ayr in 1898.

It is the subject of the book which made her get in touch with us, as she wrote about her great grandfather, a journalist and she found an Edinburgh-related item among his papers.

Carolyn explained: “The story is about my great-grandfather, William Gilmore Wallace on my mother’s side, who was a journalist.

“He was the managing editor of the Ayrshire Post from 1890. He decided when he took over that there were a lot of things going on in Ayr that needed “airing” so to speak.

“And he wrote a column in the paper under the pseudonym Oculeus. He chose the word Oculus meaning the all seeing eye. But on the very first column that he wrote the typesetter put in an extra ‘e’ which shouldn’t have been there, but he decided to retain it and make it a unique name.

“He exposed what the councillors were doing or not doing. And he talked about Ayr, allowing people to speak through him, and brought pressure to bear on all sorts of things, particularly poverty, wanting to try and build a model lodging house in Ayr Town Hall, part of which had been destroyed by fire. You name it, he did it.

“In 1898, somebody – my guess is perhaps his mother – gathered almost every article that he wrote that year and stuck it in a scrapbook. When he died the scrapbook passed to his daughter, who was my grandmother, and then to her daughter – who was my mother. About eight or nine years ago my mother was searching for something while I was in her house. She hauled out the scrapbook, simply telling me it was “Grandpa’s scrapbook”. I started asking questions about the book filled with all these elderly print articles which had been cut out and stuck in it.

“I didn’t know that there was a journalist in the family.”

Proving that news cycles do not really change much Carolyn told us that the first articles she read at random were the articles asking “Why are the council not filling in the holes in the road?” “The swearing of Ayr pupils is disgusting.” “Men wolf whistling at women – how dare they?” and “Women riding bicyles down Ayr High Street causing havoc.”

Carolyn said: “I’ve always been a social history fan and was instantly fascinated. At that time I was beginning to write, and by the time I had written an article for a magazine my husband pointed out that I probably had enough extra information to write a book.

“My grandfather’s voice jumps out. He was very humorous and could be quite sarcastic, but also really moving and poignant. He was like a dog with a bone if he got hold of something that annoyed him, and he kept going with it. I visited Carnegie Library where the archives are, and managed to get copies of the missing paper. When I had the complete year I identified twelve chapter headings, subjects, like women in fashion, crime, poverty and health, transport, buildings, politics, and a whole host of little snippets which did not fit a major theme. I put those in a chapter which I called Clattertraps – it is an old Scottish word used by Sir Walter Scott and others. I would love to know if my grandfather used it. I think it would have appealed to him.

“My mum was 12 when my great-grandfather died, and since she was the last-living link with memories of him as a person, I teased out what she could remember. I submitted the first 10,000 words to the Scottish Association of Writers and the work was commended, which encouraged me to finish the book.”

But, dear reader, you are asking what is the Edinburgh link?

Carolyn explained that because he was a journalist, her relative hoarded any journalistic artefacts and once the book was published she was sorting through the papers. Among them was a poly bag filled with old newspapers, and among them was an envelope with her great-grandfather’s writing on it. On the envelope it reads “First Edition of “Edinburgh Courant” 1705, and the envelope contained that first edition – a single sheet back and front. She said : “When I started researching I found collectors who have limited editions of when it became the Evening Courant, but no-one seemed to have this copy. It covers the period from Wednesday 14th to Monday 19th of February 1705. I would love to know where he got it from.

“There are other newspapers in the bag but nothing as unique as this.”

The story that Carolyn particularly likes relates the story of a bank fraud in Edinburgh by a bank teller, Robert Pringle, who went off with £425 of the bank’s money. There are articles from Madrid and Amsterdam included, bringing news of the Siege of Verue.

But she also pointed out that the advertisements are interesting from a social history perspective. One advertises “loozengees” to be sold by George Anderson at the foot of Fishmarket, and at George Moubray’s Shop, opposite to the Main-Guard to stop the pains of the breast. Price 8 shillings the Box. Hopefully they worked.

We believe that the Edinburgh Courant was the forerunner to the Edinburgh Evening News, and of course we wonder if anyone else has old copies of the paper. Do let us know if you do.

The paper was printed by James Watson in Craig’s Close and sold at the Exchange Coffee House in 1705.