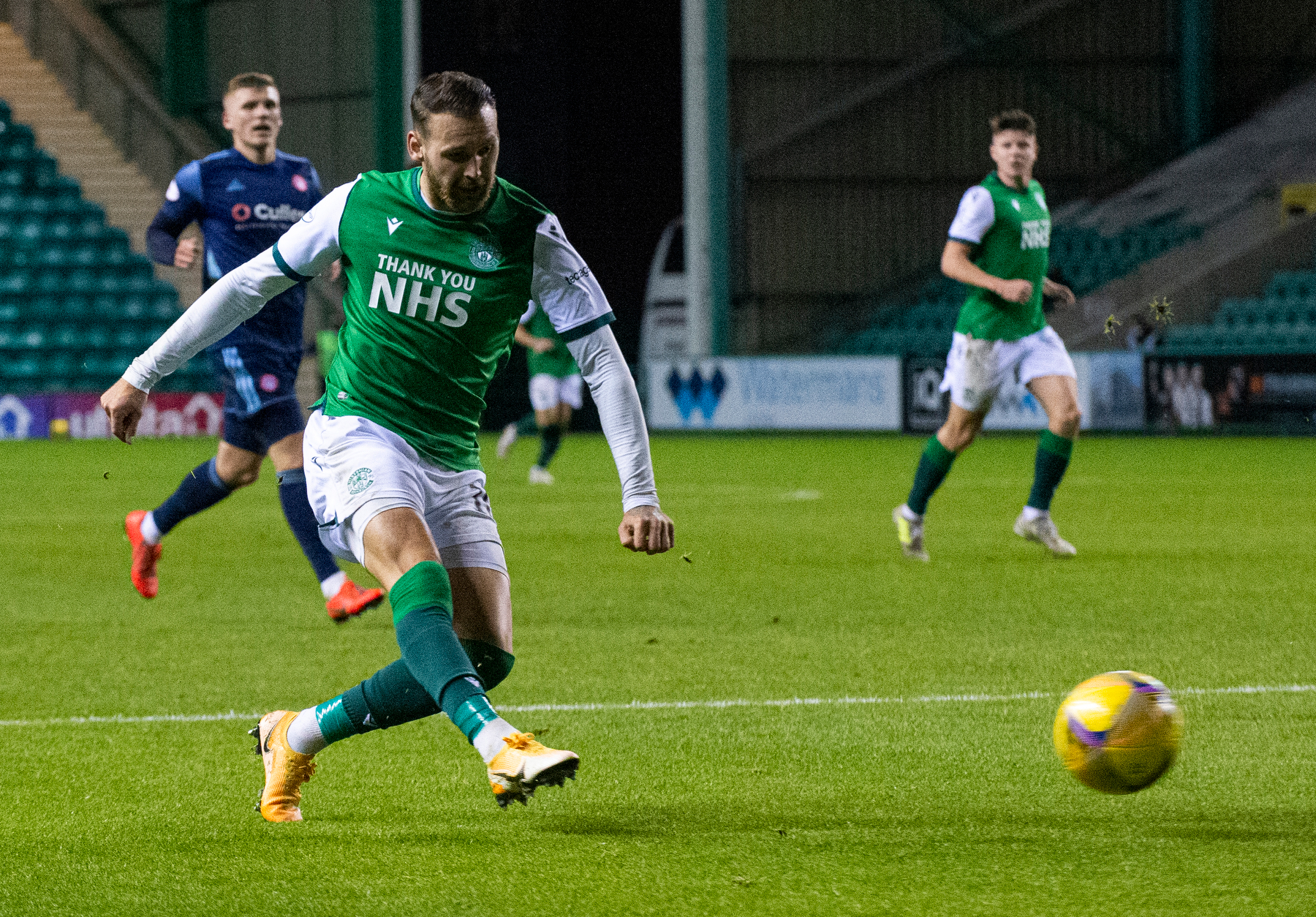 Hibs’ on-form striker Martin Boyle has played down talk of a possible summer move after media reports of a £500,000 buy out clause in his contract.

The former Dundee players who initially joined Hibs on-loan in a swap deal with Alex Harris still has two years on his contract after signing an extension in the summer insists that he enjoying his football at Hibs where his wife Rachael plays for the Women’s team.

Boyle has struck up a profitable partnership with fellow front men Kevin Nisbet and Christian Doidge which has helped the club to their first third place finish in 16-years and a Scottish Cup final.

Speaking at the Scottish Cup final pre-match press conference Boyle responded to the inevitable question regarding his future. He said: “I’ve two years left and whatever happens, happens. I’d just have to see what the opportunity was and weigh it up. I’ve never been in that position before, but I’m sure if it was brought to my attention then it’s something I would weigh up with family and the club then take it from there.

“That’s the kind of guy I am. I’m happy, playing football regularly and enjoying it.

“It has been fantastic for me, just making family proud, and although I had a chance to just see it out, and this Saturday could have been my last game, thankfully it’s not. I’m in a position where I’ve had a really good season and whatever happens will happen.”

Boyle is desperate to add to his medal collection to catch up with Rachael who is a regular in the Scotland squad but he is disappointed that she won’t be there to see it.

He added: “We’re a footballing family and love it. We wouldn’t have it any other way. That’s just what we were brought up doing. Thankfully we’re in the position we both play for the same club and are both doing quite well.

“Rachael has two Scottish Cup winners’ medals – that puts a lot of pressure on me. “She has so many more medals and caps than me that I can’t compete! We can be competitive but at the same time we are just proud of each other’s achievements.

“We were at each other’s Scottish Cup Finals – I also took our two-year-old daughter Amelia along to watch her mum play in the League Cup Final. If I wasn’t there then I’d have definitely heard about it!

“It’s a bit disappointing they won’t be there on Saturday. We thought maybe they would have the opportunity to come then it’s been taken away again. Thankfully it’s been done early. It’s just back to the situation where we’ve had no fans all season.

“Hopefully we can meet up after the game. There’s nothing booked yet. We’ll wait to see how Saturday goes and hopefully it’s in our favour.”

Boyle’s form dipped at the start of the year after his father Graeme suffered a stroke, but he says his dad is now “brand new” and when asked if a winners’ medal would mean a lot to him, he replied: “It would be brilliant. It has been an up and down season and it was difficult. To have all that happening was difficult and I haven’t felt emotions like that before. I know my dad is proud of me and what I have contributed this season.

“I’m sure he’ll be phoning me on Friday night just to tell me that it’s one more game and to give it everything I’ve got and that he’s proud. Hopefully I can bring another medal home and get my hands on that trophy. He’s back to work in the office a few days a week so it’s like there is nothing wrong with him. He’s like me, he’s a little energy bunny, so he needs to calm down and relax a bit, but he always has a smile on his face and always tells me to enjoy everything I have and keep going.”

Boyle collected a winner’s medal as an unused substitute in Hibs historic 2016 Scottish Cup victory over Rangers and enjoyed the celebrations that followed but another would top even that day.

He added: “Having played all the games and contributed goals and assists, having the chance to play in the final and hopefully lift the Cup would mean everything to me.

“Being a part of the team in 2016 wasn’t the same. Being on the bench you don’t get the plaudits and feel you’re a bit left out. This time round I’ve contributed in all the games and have played my part. Hopefully I can do the same on Saturday – that would mean everything.

“ I have a little daughter Amelia, who is three in September, who is dying to get her hands on the trophy, so hopefully I don’t let her down. But at the same time she is proud of me. She always tells me to score goals every weekend. Some weekends it is ridiculous numbers, sometimes it is realistic.

“I always ask her before I leave the house to go to the hotel or games. She has been a good omen this season. I will need to ask her this weekend what she is wanting. It might be unrealistic but at the same time it always puts a smile on my face when she gives me an answer, which is good.

“She enjoys kicking the ball about the house and obviously my wife Rachael plays for Hibs as well so it is quite a football orientated family but at the same time we won’t pressure her into playing football, we will let her make her own decision.”