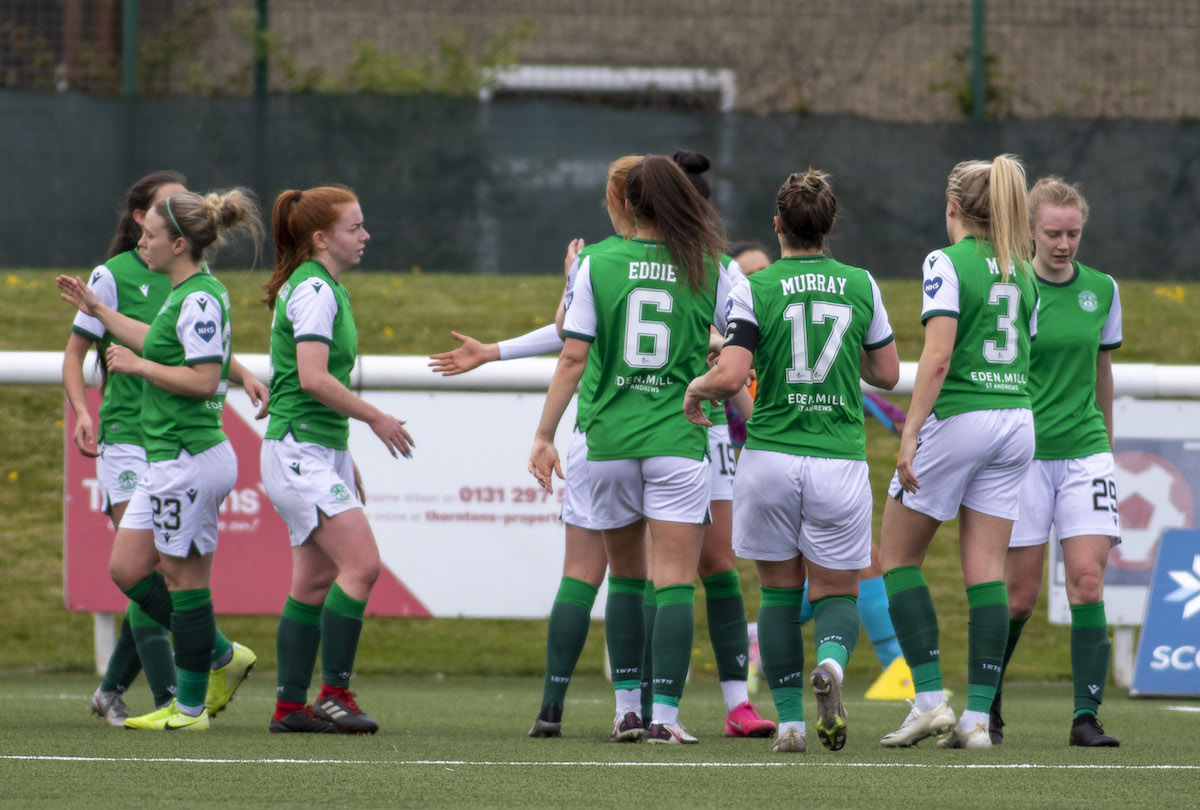 Hibs returned to winning ways with a comprehensive 6-0 victory over Hearts at Ainslie Park this afternoon as Dean Gilson’s side produced their best performance of the season and more than gained revenge for their derby defeat earlier in the season.

Hibs took the lead in the 3rd minute after a Rachael Boyle corner was headed back into the danger area by Joelle Murray. Hearts’ keeper Charlotte Parker-Smith dropped the ball at the feet of Ellis Notley who fired the ball into the net from close range.

Moments later Boyle went close with a long-ranger effort that Parker-Smith tipped over the bar.

Hibs continued to dominate proceedings and deservedly doubled their advantage in the 28th minute when Collette Cavanagh set up the unmarked Amy Gallacher who side-footed the ball into the bottom corner of the net.

Ten minutes later Gallacher collected the ball on the edge of the box, ghosted past two Hearts defenders and calmly slid the ball past Parker-Smith.

Hearts manager Andy Kirk made three changes at the break but within a minute of the restart Hibs went four up after some tremendous one-touch football which culminated with Kirst Morrison sending in a superb cross from the right wing and Carla Boyce was on hand to send a first-time volley high into the net from close range.

Two minutes later Boyle’s pass found Morrision free on the right and the winger cut inside and her precise cut-back found Gallacher who gratefully grabbed her hat-trick from close range.

Hibs continued to mount attack after attack playing some wonderful football mainly down the right side then in the 55th minute Eilidh Adams replaced Boyce.

Four minutes later Ria McCafferty replaced Shannon Leishman and in the next passage of play Mariel Kaney tripped Gallacher inside the area and Boyle dispatched the resultant spot-kick straight down the middle.

Kaney was replaced by Judith Shepherd after picking up a knock then Hibs replaced Leah Eddie with Eve Donald.

Hibs’ keeper Emily Mutch was called into action and did well to save a long-range effort from Monica Forsyth in one of Hearts’ few attacks.

Cavanagh went close with an angled drive which deflected off Claire Delworth and from Amy Muir’s corner Donald’s first-time effort was saved by Parker-Smith.

With six-minutes remaining a frustrated Shepherd was booked for a cynical foul on Morrison who had given her a torrid time since she came on.

In time added on Adams cut in from the right and fired a powerful strike which Parker-Smith managed to tip round the post and the game ended in a 6-0 victory for Hibs.

After the final whistle player of the game Gallacher told BBC ALBA: “I think we performed well. We’ve had three tough games in the past week so it was good to get the three points today and score a lot of goals.

“I’m delighted with my three goals obviously but the main thing was three points and the team scoring a lot of goals, gaining a lot of confidence and yes it was a big win for us.

“I enjoyed the game and got on the ball quite a lot. The whole team did. We played a lot of good football and played with a lot of confidence so I think we deserved to win.”

The result leave Hibs three points behind Spartans in fifth place whilst Hearts remain bottom of the table.