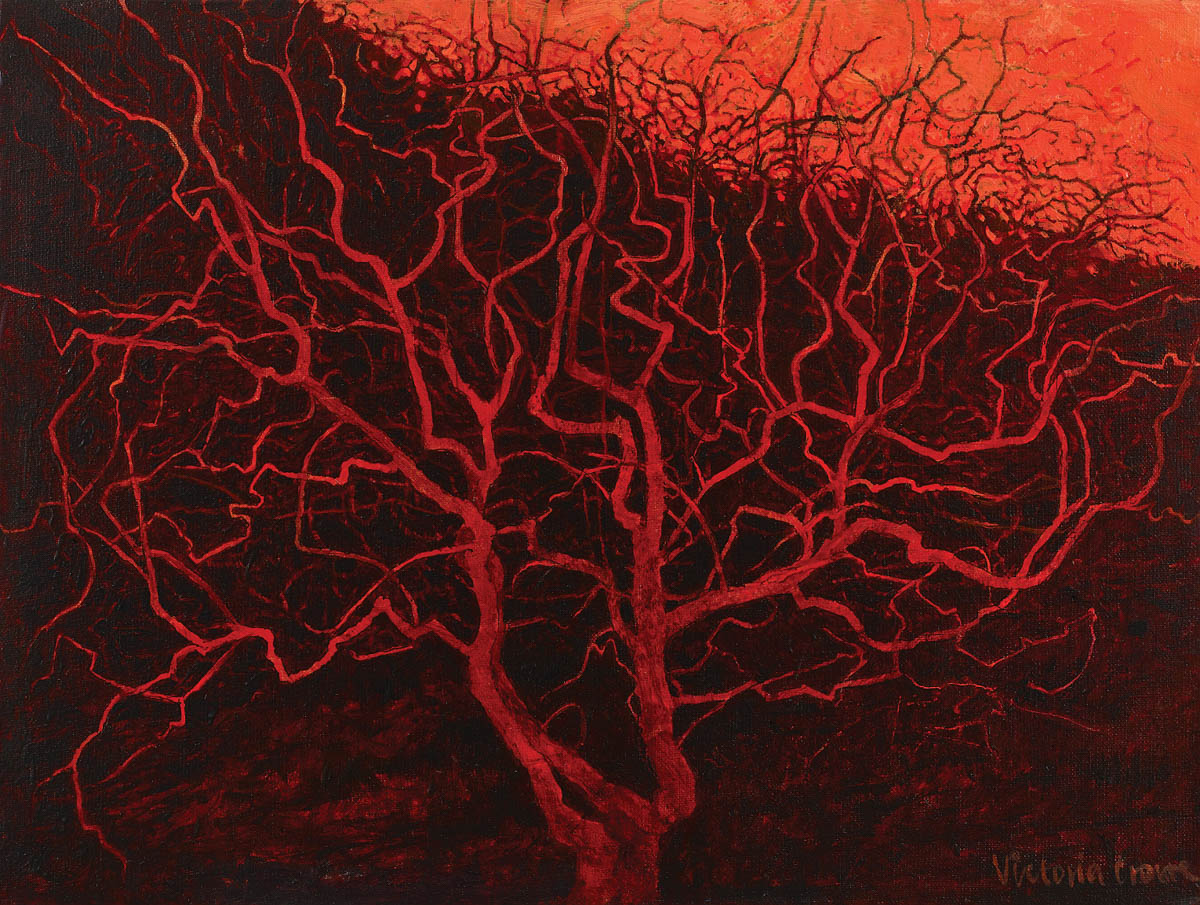 ‘Another Time, Another Place’ is a beautiful conversation between renowned artist Victoria Crowe OBE and poet Christine de Luca – both of whom have produced twelve works in this exciting collaborative exhibition.

In concert with the exhibition and galvanised by its championing of artistic collaboration, The Michael Cuddigan Trust has sponsored young musicians and composers to create a new song cycle inspired by ‘Another Time, Another Place’. This shared creative process offers a look at collaboration between artists.

The pandemic struck immediately after Crowe’s 2019 retrospective exhibition at the City Art Centre; with freedom limited as the country locked down, Crowe was also struggling with serious illness making this time even more poignant. The twelve paintings seen here represent her return to work in her West Linton studio; Crowe took advantage of the lack of social contact, using the quiet to immerse herself more easily in the process of painting.

Crowe allowed herself to focus on the elements that surrounded her; early in spring 2020, when air travel virtually stopped and road traffic lessened, she was fascinated by the colour and clarity of the night sky. She was able to look on familiar views as if for the first time and what she saw was imbued with a new intensity.

These new works are about that single idea of finding the profound outside your window – as a result, ‘Another Time, Another Place’ exists as a focused body of work to stand alone, and not to be diluted by being seen as part of a larger exhibition.

As part of the focus on collaboration between artists, there will also be a musical extension to ‘Another Time, Another Place’ by The Michael Cuddigan Trust.

The Trust, which supports young musicians, has sponsored composers and performers to create a new song cycle inspired by the paintings and poems in this exhibition. If government restrictions allow, The Scottish Gallery will stage a performance of these songs among the exhibition.

Victoria Crowe comments, “Just as I was beginning to get some strength and creativity going, beginning to focus on my work, the world changed again and we all know about the uncertainty that came into our lives.

“As I began working in the studio, I found it extremely difficult to reconnect with previous work, and realised I couldn’t resume where I had left off a year earlier.

“Everything had shifted, I had changed, and so had the world.”

The conversation with Crowe and Christine de Luca began over an iPad photo of The Amazing Clarity of the Night Skies.

The paintings and the poetry connect to bring parallel ideas together, the poetry often extending the images and providing added context. De Luca comments, “My first approach was just to sit and stare into the image almost as if it were an icon: to try to absorb the mood rather than think about its constituent parts.

“Usually something particular would strike me that would become the vital spark for the poem. Often it seemed that the paintings chimed with my personal sense of spiritual questing. Ideas would start to take shape and gradually a ‘raw’ poem would emerge often quickly, almost out of the ether.

“Only later would technique start to play a part.”