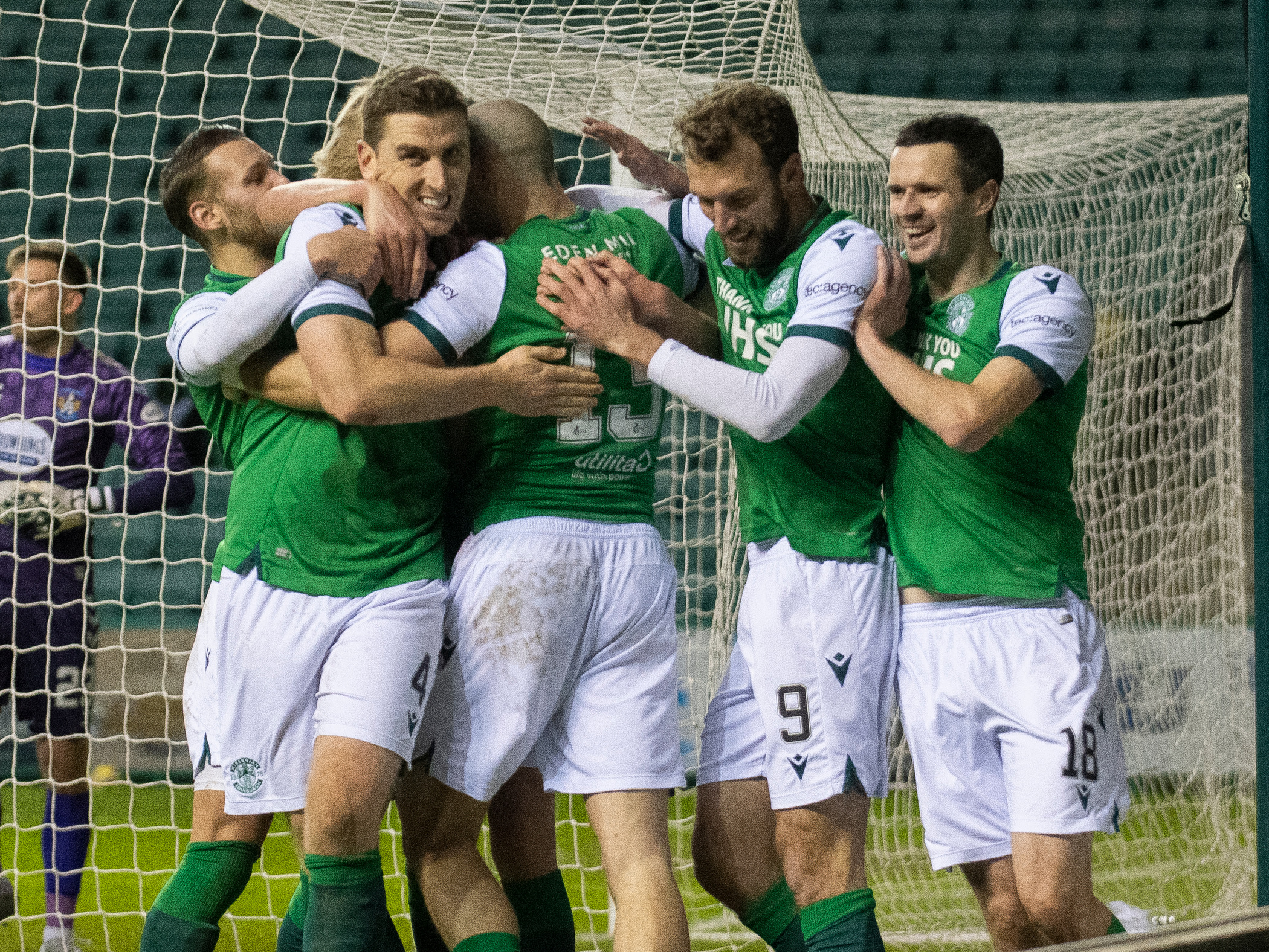 Hibs returned to winning ways with a comfortable 2-0 victory at Tannadice despite the absence of the two of the players who are currently the subject of transfer speculation, Kevin Nisbet who has been linked with a big money move to Birmingham City and Ryan Porteous who is wanted by Millwall.

Head Coach Jack Ross made three changes to the starting XI that lost to Rangers in midweek, with Paul Hanlon, Martin Boyle and Jamie Murphy replacing Melker Hallberg , Porteous and Nisbet. There was no place in the squad for Stevie Mallan or Joe Newell.

Marc McNulty who enjoyed two loan spells with Hibs started for the hosts.

Dundee United almost took an early lead when Callum Butcher’s long range effort deflected off the boot of Josh Doig causing the ball to loop high into the air but Ofir Marciano did will to get back and tip it over the bar.

At the other end, a Martin Boyle corner from the right was headed goalwards by Darren McGregor. The ball fell to Alex Gogic with his back to the goal but the Cypriot international was unable to turn and get a shot in and the danger was cleared.

In the 20th minute, Chris Cadden  sent Christian Doidge clear down the right win but his low cross was cleared. Martin Boyle (pictured) took the resultant corner which was won by Paul McGinn. Benjamin Siegrist did well to palm the header away but Jackson Irvine was on hand to slide the ball into the path of Darren McGregor who fired an unstoppable strike high into the net from 15-yards.

Jamie Robson was lucky to escape a booking for a reckless challenge on Cadden, who was then fouled again in the process of shooting but referee Gavin Duncan gave a corner instead whilst the Hibs’ player required treatment.

There was a scare in the 30th minute when Josh Doig appeared to impede McNulty inside the area but the striker elected to stay on his feet and try to get possession of the ball. Had he gone down the referee would have had to make a decision and it could well have resulted in a penalty.

McGinn then found Cadden on the right and after a great run, his low cross was deflected past for another Hibs corner.

United enjoyed a sustained spell of pressure at the start of the second-half but it was Hibs who should have increased their lead. Jamie Murphy sent a superb cross from the left but Doidge missed the header with the goal gaping and the ball trickled past the post.

Butcher then broke clear and set up Lawrence Shankland whose shot deflected off McGregor but Marciano managed to save with his outstretched boot.

In the 67th minute, Ross replaced Murphy with Kyle Magennis and his first act was to win the ball in midfield and find Jackson Irvine on the half-way line.

The Socceroo looked up and slid a perfect through ball into the path of his international team mate Boyle who calmly dinked the ball over the diving Siegrist in the net.

Hibs then had a penalty claim when Mark Reynolds clearly pushed Boyle in the back but the referee waved play on. Moments later United should have had a penalty when Doig and Shankland fought for possession and the Hibs’ youngster appeared to sweep the ball away with his arm.

Once again the referee waved play on much to the fury of the United bench.

At that stage Hibs were content to hit on the break and a long clearance from Hanlon found Boyle who beat Reynolds but his angled shot from the edge of the area was easily saved by Siegrist.

Shankland had two long range efforts which went high and wide of the goal then in the dying minutes McGregor was booked for blocking a Butcher run.

Drey Wright replaced Boyle in the last minute and Hibs held on for a comfortable and well-deserved victory.