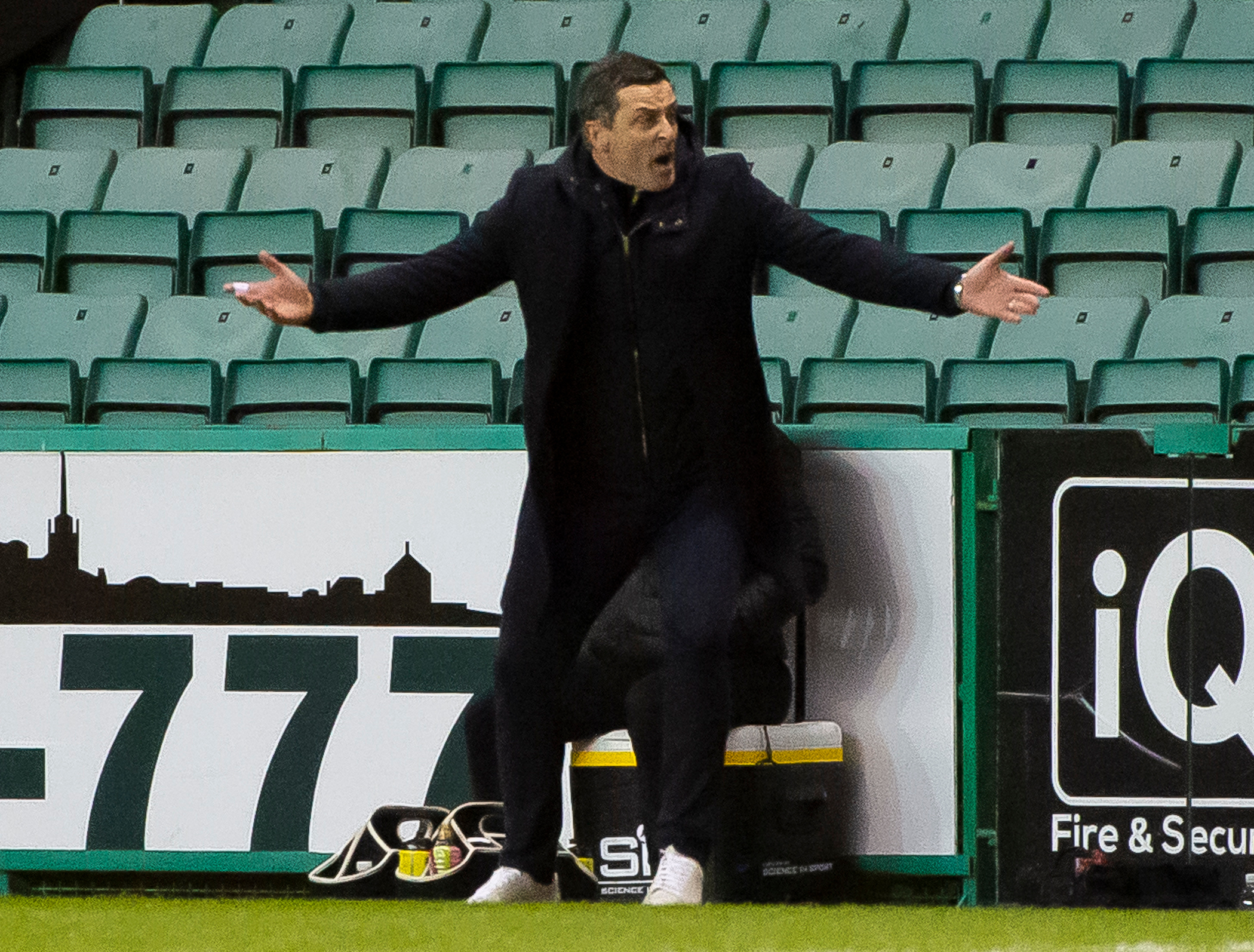 Rangers secured all three points against Hibs at Easter Road tonight thanks to a goal from Alfredo Morelos who should have been shown an earlier red-card for a deliberate stamp on Ryan Porteous.

Jack Ross made three changes to the starting XI that lost to St Johnstone in the Betfred Cup semi-final on Saturday with Darren McGregor, Melker Hallberg and Christian Doidge replacing Paul Hanlon, Martin Boyle and Jamie Murphy who was not allowed to play against his parent club.

Steven Gerrard made one change to his line-up that hammered Ross County  with Ryan Jack, who came off the bench to net in that victory replacing Ianis Hagi.

Rangers had a chance to take the lead in the opening minute when Connor Goldson headed a James Tavernier cross just wide.

At the other end Kevin Nisbet sent in a low cross but his strike partner Doidge’s effort was blocked then from the resultant corner, the ball broke clear to Glen Kamara and Josh Doig was shown a yellow card for tripping him up as he broke clear.

A mistake by Hallberg then allowed Ryan Kent to set up Joe Aribo but Ofir Marciano did well to save his effort from the edge of the box.

There was controversy in the 16th minute when Morelos clearly stamped on Porteous but incredibly referee Kevin Clancy who was perfectly positioned and looking right at the pair did not see the incident. The pair had ‘history’ following the last encounter at Easter Road and the Columbian could well face retrospective punishment for the offence which merited a straight red card.

Kevin Nisbet had the ball in the net in the 19th minute but the flag was raised.

Moments later a Chris Cadden cross deceived Allan McGregor at his near post. He tried to get the ball at the second attempt but was robbed by Doidge who found Jackson Irvine but his first-time effort flew over the bar.

A cross from Doig then found Doidge at the back post but his header went wide of the post then a Porteous cross just evaded Doidge as Hibs piled on the pressure.

At the other end Kent found Morelos unmarked inside the area but his shot seemed to strike Tavernier and the danger was cleared.

The visitors enjoyed a sustained spell of pressure at the start of the second-half and inevitably it was Morelos who opened the scoring after some fine one-touch play.

Hibs responded at McGregor did well to hold a dangerous low cross from Doig which just evaded Hallberg’s diving header.

Morelos should have made it 2-0 when Kamara’s cross left him with an open goal but he sliced his effort high and wide.

On the hour mark Jackson Irvine almost equalised but his header from Hallberg’s corner flew inches wide of the post then Darren McGregor was booked following a tussle with Kamara.

A great through ball from Kent then found Morelos in acres of space but Paul McGinn got back to rob him as he was about to pull the trigger.

In the 68th minute Ross made a double substitution with Hanlon and Boyle replacing Porteous who had taken a knock and Doig.

Boyle immediately took up his position on the right wing whilst Cadden moved to the left.

Great play from Kamara then set up a chance for Kent but Marciano did well to save his powerful strike.

Scott Allan then replaced Alex Gogic with 11-minutes remaining as Hibs fought for an equaliser but Rangers were content to keep possession and hot on the break.

Irvine was booked for a trip on Cedric Itten after Kent sent him clear.

With time running out Boyle broke down the right wing and sent a superb cross into the area but Filip Hellander managed to head the ball over his own bar.

In time added on Itten went close with a powerful strike from an acute angle which hit the side net and Rangers held on for the victory.