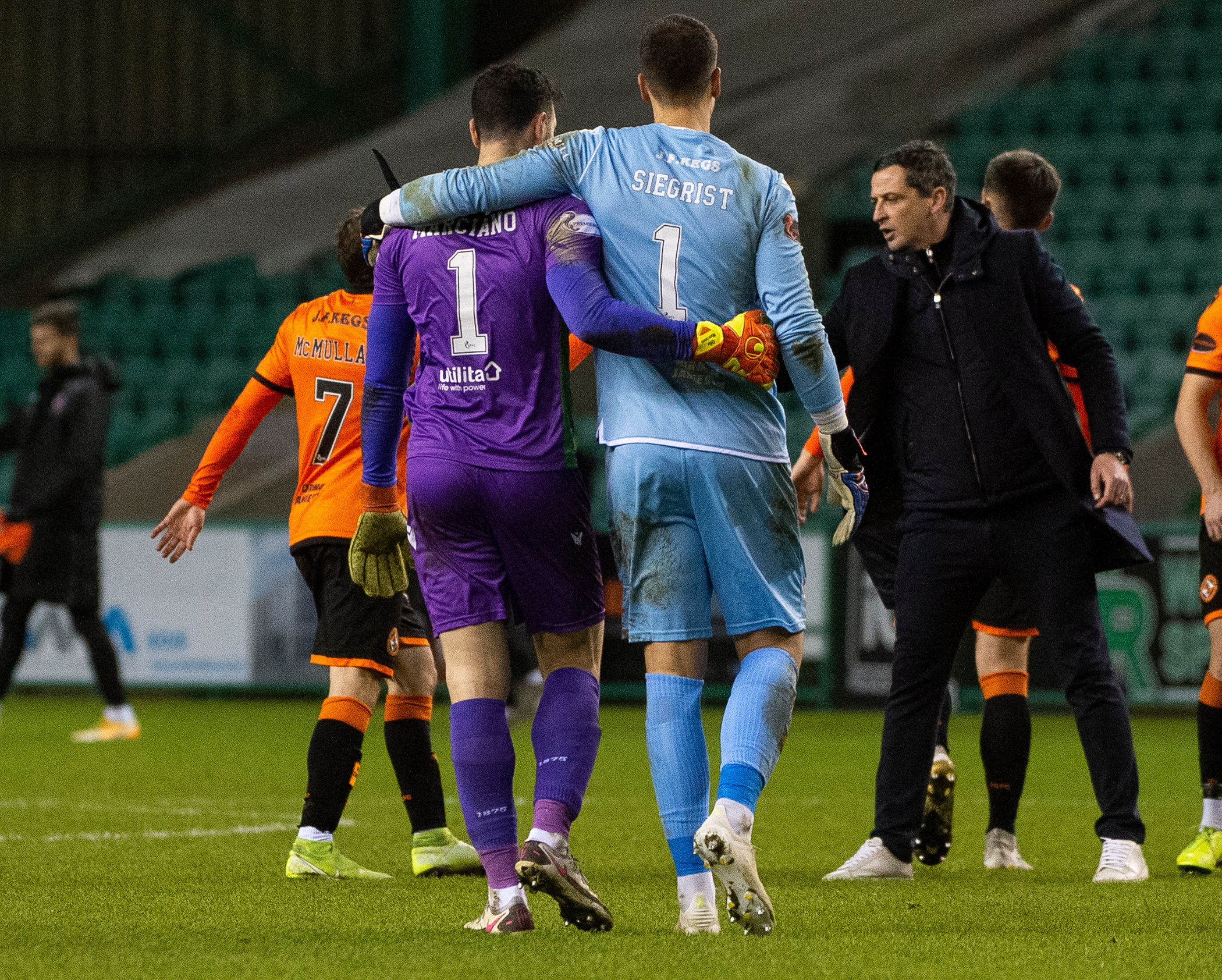 A late goal denied Hibs the victory that would have seen them leapfrog Celtic into second place at Easter Road this afternoon in a game they totally dominated throughout, and but for a tremendous goalkeeping performance from Benjamin Siegrist the home side would have won comfortably.

Head Coach Jack Ross made two changes to the starting XI that progressed to the semi-final of the Betfred Cup with a victory over Alloa Athletic on Tuesday night.

Kyle Magennis replaced Drey Wright whilst top scorer Kevin Nisbet returned in place of Jamie Gullan. Wright and Gullan were both listed as substitutes along with Alex Gogic who has missed recent games due to a niggling injury.

The game came too soon for Jamie Murphy who picked up a hamstring injury in the victory over Motherwell two weeks ago.

Stevie Mallan was initially listed as a substitute but a late injury test culminated with him being replaced by Stephen McGinn at the lats minute.

There was a familiar face in the visitor’s line-up with Marc ‘Sparky’ McNulty, who enjoyed two successful loan spells with Hibs started for United.

Hibs started brightly and almost opened the scoring in the opening minutes when Christian Doidge headed a Melker Hallberg corner goalwards but Siegrist produced a sensational one handed save to deny the Welshman.

The referee then twice ignored blatant fouls on Paul McGinn within the space of a minute before Joe Newell almost found Doidge with a cross but Liam Smith managed to intercept.

Hibs opened the scoring in the 12th minute after Lewis Stevenson found Magennis on the right. The former St Mirren man cut inside and sent in a superb cross toward Doidge who appeared to nod the ball past the keeper into the net however television replays suggest that he didn’t make contact and the goal was accredited to Magennis.

Hibs were dominating possession however Dundee United broke clear and McNulty found Lawrence Shankland inside the box but Ofir Marciano did well to block his shot from an acute angle and Ryan Porteous cleared the danger.

A deft flick by Doidge set up Hallberg but Siegrist was too quick and managed to get to the ball first.

Hibs almost doubled their lead in the 24th minute but two world class saves from Siegrist kept the score at 1-0.

Martin Boyle cut inside from the right and fired a powerful shot toward the United goal. The ball deflected off a defender and Sieghirst produced a superb save. The ball then returned to Boyle and his next shot found Doidge on the six-yard line  but once again Siegrist saved his point blank shot.

Moments later Nisbet’s through ball found Boyle but he was flagged offside although he looked level when the ball was played.

In the 33rd minute McNulty went close with a powerful 25-yard strike.

Newell went close with a long-range effort then just before the break McGinn found Boyle with a superb first time pass. The winger controlled the ball on his chest but once again Siegrist did well to block his shot.

Doidge did well to pressurise Mark Reynolds into conceding a corner just after the restart. The ball fell to Boyle whose shot was deflected inches wide of the post.

From the resultant corner, Nisbet fired the ball against a defenders arm but referee Gavin Duncan waved away his appeals.

Reynolds was then booked for a cynical foul on Boyle as he was breaking clear then at the other end McNulty tested Marciano from an acute angle. From that corner, the United players claimed for a penalty but the ball clearly struck McGinn’s shoulder and the referee refused their claim after checking with his linesman.

In the 59th minute Nisbet found Hallberg who slid the ball into the path of Doidge who looked to be impeded inside the box but he managed to get his shot away and once again Siegrist was on hand to save.

Wright replaced Magennis in the 64th minute then Ryan Porteous demonstrated why he is a regular in the international squad with two great pieces of defending.

Boyle was brought down on the edge of the area by Robson who was booked but Hallberg’s poor free-kick was cleared.

He was immediately replaced by Gogic who made an immediate impact with a superb ball to Boyle. The winger cut inside and slid the ball to Nisbet of the edge of the area but his effort went wide of the target.

Two minutes later Gogic was booked for a mistimed challenge on the half-way line.

United sub Peter Pawlett was the next name in the referee’s book for a cynical foul on Boyle who was breaking clear the Lawrence Shankland was lucky not to be booked for a late barge of Lewis Stevenson.

Hibs should have wrapped things up near the end when Nisbet fed Doidge but his effort under pressure was saved by Siegrist once again.

From the resultant corner Gogic’s header was well held by the United keeper.

In time added on, McNulty picked up the ball inside the Hibs penalty area and his cut back deflected off Newell into the path of Luke Bolton who fired the ball into the net from close range to give United a point they did not deserve.

After the final whistle Ross told BBC Scotland: “We should win the game because of the amount of opportunities we create. And then we’re ahead with a couple minutes of injury time to go. Undoubtedly that’s two points dropped for us.

“It’s a really frustrating afternoon for us. It’s probably the angriest I’ve been with the players in terms of us making sure we get our rewards because we did more than enough to win.”

Dundee United manager Micky Mellon said: “I’m delighted that the boys got a deserved point. I thought we played with the handbrake on a wee bit. As the game progressed, we got more into it.

“The second half, we always knew we had two wide men that we could introduce and have a different threat. The two boys have come on and done really, really well. And Benjamin Siegrist is a top drawer goalkeeper. He’s made some terrific saves.”