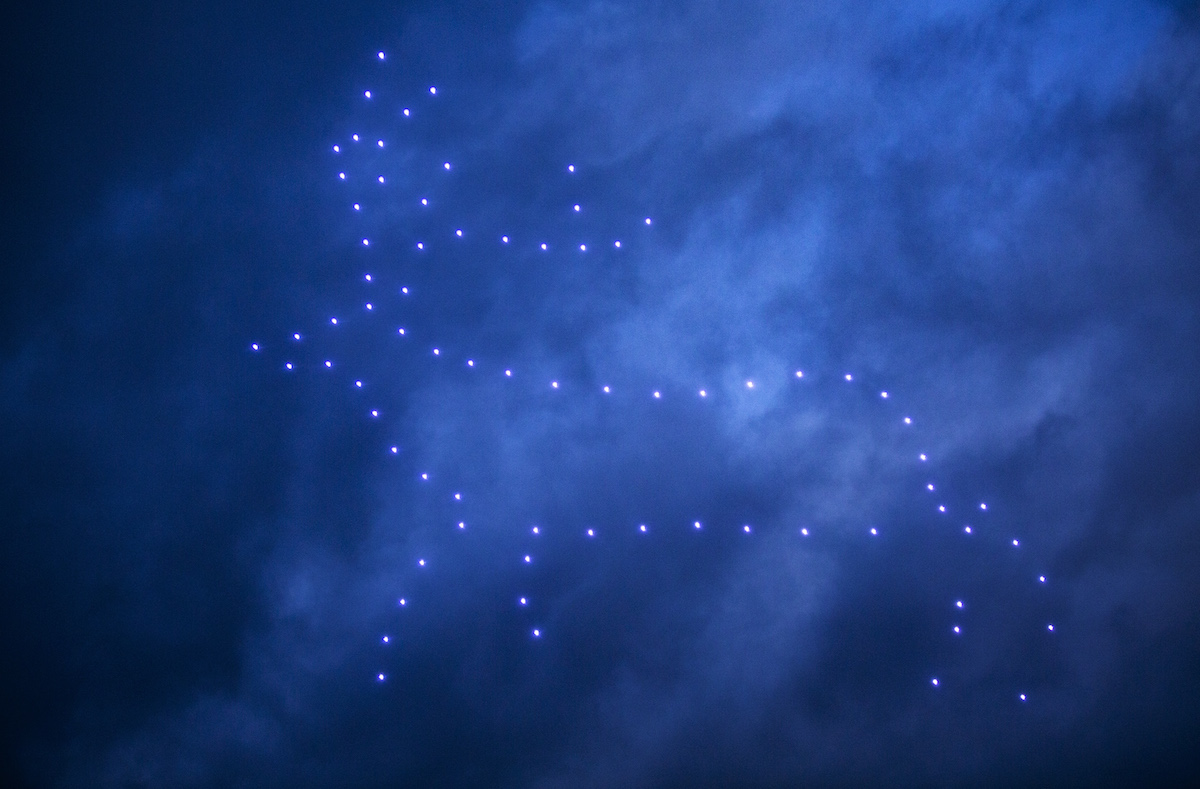 There is something you never thought you would read at this time last year.

With ongoing Covid-19 restrictions the street party and all related events are cancelled. Instead, Underbelly who organise Edinburgh’s Hogmanay for the council, have commissioned the largest swarm drone show ever seen in the UK which will be called Fare Well.

This will take place at 7pm each night from 29 to 31 December inclusive. This is based on a new piece of writing by Scots Makar, Jackie Kay and will involve 150 individual drones relating the tale. Our Scottish scenery will feature large from Spean Bridge to the Forth Bridge and the finale here in Auld Reekie.

This is an ode to Scotland:

“This air has heather and malt on its breath

as it sighs, puffed oot after a year of death,

under the blue mask of its flag. The Saltire’s

been a warning cross. Dinny come too near.”

Visual Development artist Gary Wilson has created the image which the drones are programmed to depict along with a series of words, animals and shapes in the sky. Drone show pioneers Celestial have used their skills to create the largest choreographed drone swarm in the UK which will reach an altitude of 150 metres and speeds of up to 25 mph. The drones use AI software to depict the images.

Among the cast are some well known faces such as David Tennant, Lorne McFadyen from Outlaw King, a collection of Scottish young voices including Blessed aged 16 from Aberdeen, Miren aged 9 from Glasgow, Heather aged 18 from Glasgow and Winnie a 25 year-old native Gaelic speaker from the Isle of Skye.

There are three, five minute sections, which will be available to view online on 29, 30 and 31 December. The event is free and anyone from all over the world can log in. There will also be some behind the scenes footage to watch.

“So, aye, the New Year’s born at midnight.

from this scunnered year. And though we can’t First Foot

we send out Hope into this Scottish air,

breathed out by widows, workers, weans, by those who care,

by those who vote, shout, march to ring the changes

at the Bells, who’ve clocked the dangers.”

Charlie Wood and Ed Bartlam, Directors of Underbelly and producers of Edinburgh’s Hogmanay, commented: “With 2020 being the year it has been, we want to ring out the old year and hurry in the new year, with a message of hope at a world-class event. Hope will be the universal message of the turn of the year, and ours will be no exception – Edinburgh’s Hogmanay’s mission is to sing it from the roof tops with a creatively-led and proudly Scottish celebration.

We’re grateful to our creative team and to the City of Edinburgh Council, EventScotland, The Scottish Government and Creative Scotland who have supported us to create a unique and special moment for people around the world.  Join us from the 29-31 December, it truly is an event not to be missed.”

“We say Wha’s like us, singing Auld Lang’s Syne.

“We share the planet’s air. What’s yours is mine.”

Donald Wilson, Culture and Communities Convener at City of Edinburgh Council, said: “We’re very proud of our status as the home of Hogmanay and I have no doubt this will endure for many years to come.

“As with many aspects of our lives, we’ve had to adapt our plans for this year, but I believe we’ve found a fitting way to celebrate and mark the end of a highly unusual and challenging year – whilst looking ahead to 2021 with the hope and optimism that each new year brings.”

Amy McNeese-Mechan, Culture and Communities Vice Convener at City of Edinburgh Council, said: “The best place to celebrate Hogmanay this year will be from home. Please plan to ‘coorie in’ with your nearest and dearest, keep each other safe and please enjoy the UK first premiere ‘Fare Well’, featuring original and quite wonderful contributions from Scotland’s finest musicians and poets.”