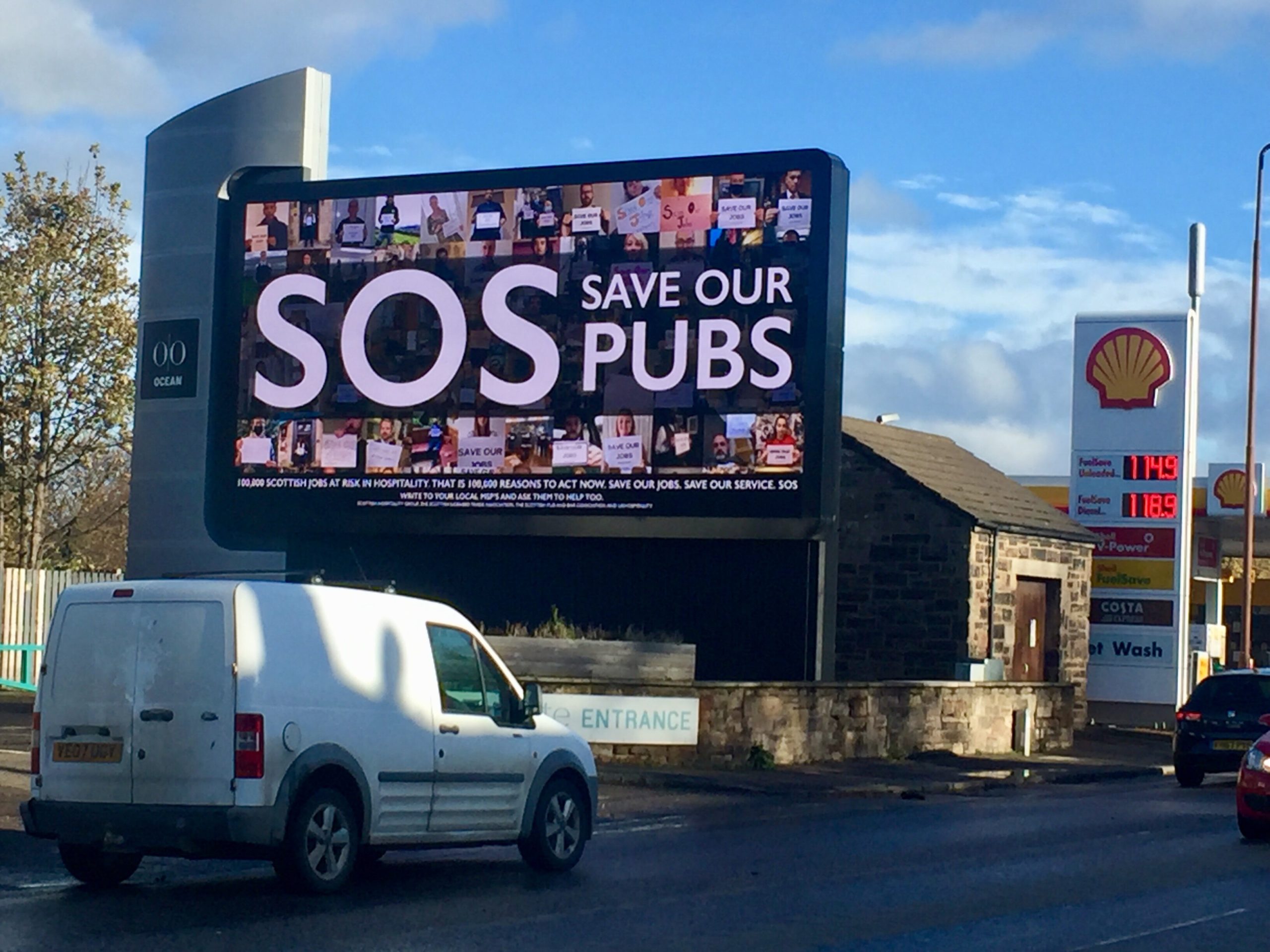 Some of the top names in Scottish hospitality have launched a new ‘SOS Save Our Jobs’ campaign and have taken over around 50 giant digital billboards in the central belt.

They will use these to promote their message to an estimated audience of hundreds of thousands of people.

Adverts will appear on billboards in Glasgow, Paisley, Wishaw, Airdrie and Rutherglen too.

The campaign spells out the impact of government-imposed restrictions on Scotland’s hospitality industry and pleads with the public to help by writing to their politicians in support of the industry to help save 100,000 jobs.

The campaign is backed by the Scottish Hospitality Group, the Scottish Beer and Pub Association, The Scottish Licensed Trade Association and UKHospitality, as well as Michelin star chef Tom Kitchin, Nic Wood of pub and bar collection Signature Group, James Thomson of Prestonfield and The Witchery, Edinburgh’s Carina Contini and the Scotland-wide Crerar Hotels group.

The campaign highlights the fact that thousands of jobs are at risk right across the sector – from pubs, to hotels, late venues to restaurants, including the associated jobs relating to those that supply the industry.

This new ‘SOS Save Our Jobs’ campaign follows hot on the heels of the social media campaign launched earlier this month set up by Edinburgh PR Agency, Taste Communications, on behalf of their hospitality clients. This is called  ‘Save Our Jobs’, and included hospitality staff posting selfies on social media using the hashtags #SaveOurJobs and #ScottishHospitality to highlight the faces behind the jobs which may be under threat.

The latest campaign, supported by Ocean Scotland and by Taste Communications, is intended to raise awareness of the need for the public to support an industry under siege. The professionals behind the hospitality industry say it is one sector which has done its utmost to adhere to all the mitigations set in place to operate safely.

Stephen Montgomery, spokesperson for the Scottish Hospitality Group commented, “I think this campaign highlights the extent of the issues we are facing, with a tsunami of redundancies already taking place. Our staff are a key priority for us, and they play a major part in the cogs of our businesses. For them it’s not just about losing their jobs, it’s about their families, and the mental health that surrounds all this. We need to protect them. They are a part of our greater hospitality family.”

While Marc Keenan, Managing Director of Ocean Scotland, said, “The hospitality industry in Scotland is a vital part of the economic picture and we are delighted to have been able to facilitate this campaign on our many screens. The campaign will be seen by hundreds of thousands of people and we hope they will add their voice to the campaign to save hospitality jobs.”