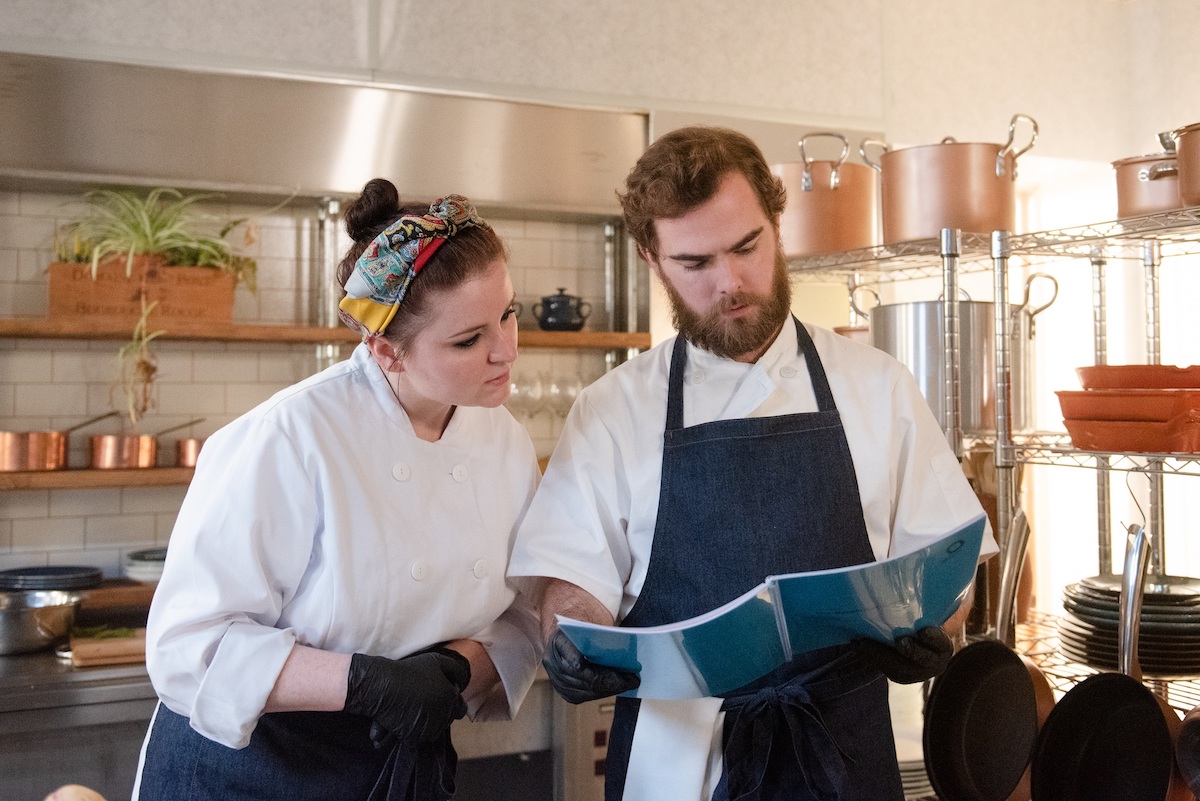 Set in the kitchen of a restaurant, The Narcissistic Fish, in the Leith area of Edinburgh, the opera tells the story of the stormy relationship between chefs Angus, Kai and Belle, and touches on the themes of narcissism, gender bias and class. The concept of the film was first conceived by Antonia and Samuel two years ago, who had the idea of creating a narrative set in a commercial kitchen.

It features three of the Company’s 2019/20 Emerging Artists, baritones Arthur Bruce and Mark Nathan and soprano Charlie Drummond, singing over a digitally created score, that incorporates real sounds from a kitchen as percussion. As well as being able to view the film online, a digital programme will be available to download, along with photos, trailers and interviews with the cast and creative team.

The very first work in Scottish Opera’s new Opera Shorts initiative – opera created by a wide range of artists using digital technologies – The Narcissistic Fish will be screened on the Company’s website and social media channels.

The libretto, written in Scots, was completed first by Jenni, followed by extensive storyboarding, then Samuel composed the vocal music, with basic harmonic templates underneath. Vocals were then recorded to a click track, allowing the cast to sing along to their own recordings during the shoot, which took place at the end of last year at Parkhouse Business Park, in north Glasgow. Samuel then composed the rest of the score underneath the first edit allowing him to react to the visual stimulus of the film.

Antonia Bain said: “Since joining Scottish Opera in 2015, I have always wanted to present opera in a digital format that would be a piece in itself rather than to promote our stage shows or be based on an existing opera: a brand new piece of digital operatic work that would appeal to new audiences, as well as existing ones.

“When we found Jenni Fagan, we gave her the location and number of characters and she delivered an exciting, fresh, and engaging plot and libretto. Her decision to write this in Scots really throws the audience into the heart of the action, but she has also managed to create an opera which I find to be dramatic, funny at moments but genuinely emotionally charged which is exactly what you want in an opera!

“The project was technically challenging as it was made in a very different way from a stage show, but it was great to work with the rest of the Scottish Opera team to meet those challenges. It was also eye opening for me to direct an opera for the first time. The singers made it so easy, and it was brilliant to talk through ideas for their characters.”

Samuel Bordoli said: “Working on The Narcissistic Fish with Antonia and Jenni has been fascinating. We had to invent a new way of working, unfamiliar to the world of opera. This has been a highly collaborative process with lots of back and forth along the way.

“Our approach from the outset was to make a short film that happened to be an opera, rather than an opera that happened to have been filmed. In other words, it was built and conceived from the ground up, with every aspect working in tandem from conception to completion.

“One of the fun things about a kitchen setting was the opportunity to incorporate real sounds into the score as percussion. Some of these are electronically manipulated and disguised. In the first half of the film, tempo increases ramp up the tension. Metric modulations are used to get from one repeated sound to another – a cross rhythm cuts across the beat, then becomes the new beat.

“Completing the score underneath the recorded performances of our wonderful cast was an experience I would love to repeat. I did not need to imagine their voices as I worked – I could actually hear them.”

Jenni Fagan said: “My goal was to collaborate with Scottish Opera on a libretto written in working class Scottish. I felt the nuances and richness of the language deserved to create a musicality and story that would have its own edge and identity. I didn’t want the characters to necessarily be a more classical opera concept – it was interesting to go for something that felt vibrantly contemporary in subject matter and identity. It is a short story that comes alive due to the passion and conflict inherent in the three main characters’ lives. The Narcissistic Fish is a contemporary, modernist opera encompassing themes of narcissism, gender bias and class.”

Charlie Drummond said: “I have a particular passion for contemporary opera so was delighted to be invited to take part in this project. Equal parts opera, soap opera and ‘Kitchen Nightmares’, it was fascinating to learn about the process of television making, and to see how such different art forms could be combined.”

Arthur Bruce said: ‘The crew were amazing, and it was a proper film set. It took a while to get used to all the lingo – I previously had no idea what the grip, the gaffer, the focus-puller, and the best boy did! Obviously having trained to sing and act simultaneously on a very large stage, it was a massive difference to then have to sing or mime along to the track we had previously recorded, whilst acting with a camera right in your face. While I might not be winning an Oscar anytime soon, it was a hugely educational and useful opportunity.’

Mark Nathan said: ‘When I was first told about The Narcissistic Fish, I was a little trepidatious. A full on filming project? An electronic accompaniment that hadn’t yet been written? A Leith accent? I went into the project with an attitude of excitement, coloured by a healthy dollop of terror. However, I ended up having more fun than I could have imagined! The experience of working on a film set with a wonderful crew was incredibly educational and enjoyable. I had a brilliant time learning and recording Sam’s fantastic score.’

To watch The Narcissistic Fish on June 18, visit www.scottishopera.org.uk