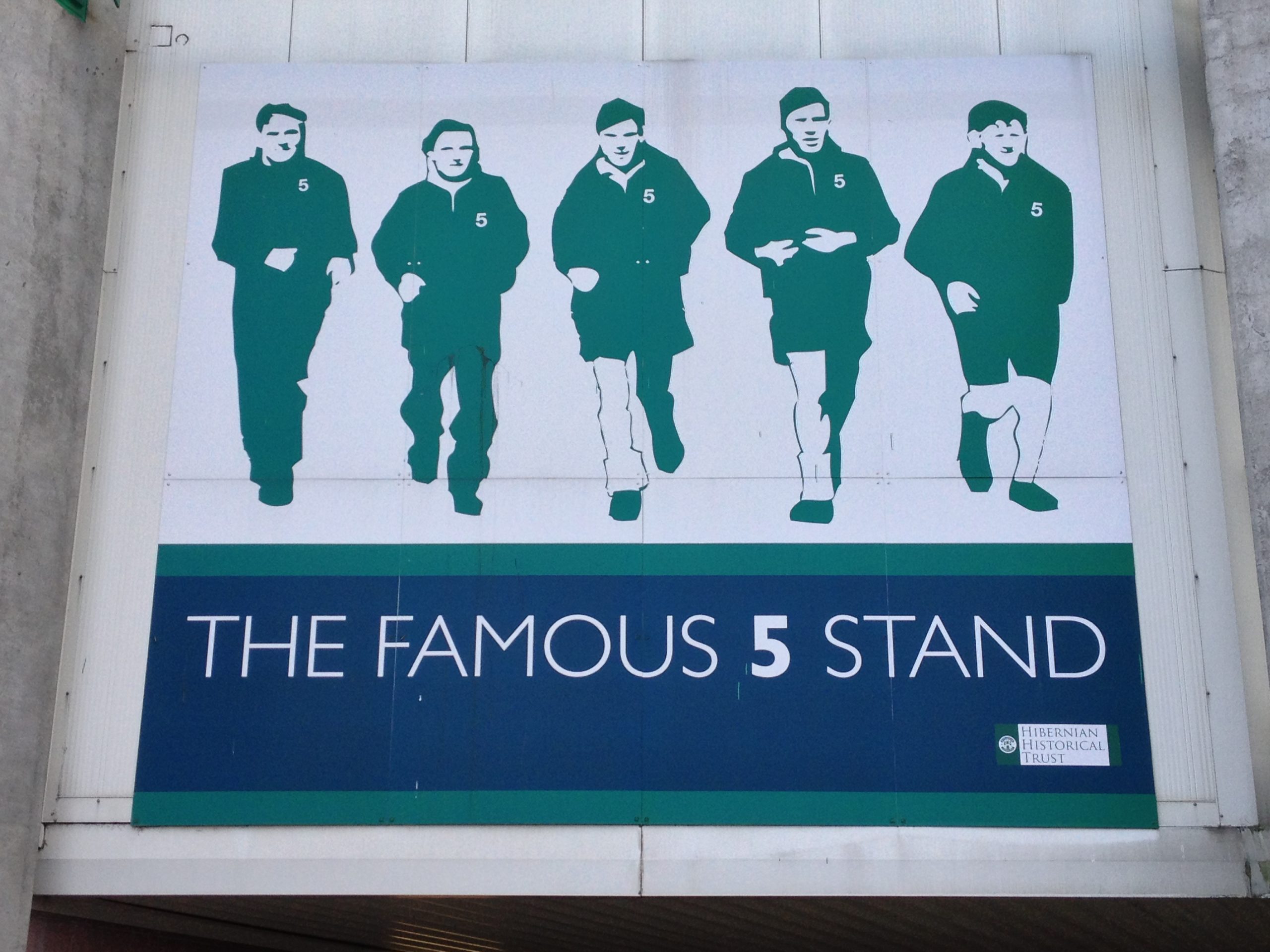 It is seventy years since over 100,000 fans crammed into Ibrox Stadium to watch the Hibs’ ‘Famous Five’ forward line take on the Rangers’ ‘Iron Curtain’ defence in a match to decide to Scottish League title.

The pair shared the title in the seven years after the after the war and were generally considered to be the top two clubs in the country.

Hibs were admired by fans of all the other clubs due to their attacking style of play and their formidable forward line of Gordon Smith, Bobby Johnstone, Lawrie Reilly, Eddie Turnbull and Willie Ormond attracted massive crowds wherever they played.

Rangers were less attractive to watch but had a particularly strong defence consisting of goalkeeper Bobby Brown, full backs George Young and Jock Shaw, centre half Willie Woodburn and wing halves Ian McColl and Sammy Cox that was known as the ‘Iron Curtain.’

Hibs led the table until the beginning of March when a 1-0 home defeat by Third Lanark severely dented their aspirations while allowing Rangers to overtake them at the top of the table.

Facing Hibs that afternoon was former player Johnny Cuthbertson who had joined Third Lanark only at the beginning of the season and goalkeeper Lewis Goram, father of the future Hibs and Scotland goalkeeper Andy Goram. At that time Goram was still a registered Hibs player but after a spell on loan at Leith Athletic he had been farmed out to the Cathkin side. It would turn out to be Goram’s only first team appearance at Easter Road before his transfer to Bury at the end of the season.

A convincing 4-2 home win against Dundee a few weeks later now left the championship a two-horse race between Hibs and Rangers, and it would possibly now all depend on the game between the pair at Ibrox.

The previous week Rangers had won the Scottish Cup and would be confident of victory, but if Hibs could take both points it would guarantee the Easter Road side the title.

Unfortunately it was not to be. With the gates closed well before the start in front of over 100,000 supporters including a large number that had made their way from Edinburgh, an unimpressive 0-0 draw left one newspaper headline the following day to proclaim, ‘No goals, no thrills and for Hibs no flag’.  Hibs’ player Jimmy Cairns had played the last 30-minutes of the game with a broken leg and Willie Ormond’s shot shaved the post in the dying minute.

Both sides were now level on points. Rangers however still had a game in hand. In the final match of the season against Third Lanark at Cathkin the Ibrox side now needed just a draw to win the championship.

With Goram keeping his place in the Third’s side, just 15 minutes were remaining when the former Hibs player Cuthbertson missed the penalty that would have given his former side the title but  the 2-2 draw allowed Rangers to become the first ever team to win the treble.

Whilst Rangers were winning the title, the Hibs’ players were beating Tottenham Hotspur 1-0 at White Hart Lane thanks to an own goal by Alf Ramsay  in a friendly match ahead of a post season European tour.

Eddie Turnbull later recalled: “Perhaps it was the nervousness of both sides but the match petered out into a poor goalless draw. The amazing thing was that Hibs had scored 86 goals while Rangers could only manage 58. The secret of their success was undoubtedly the ‘Iron Curtain’ defence and though we envied them their title we preferred to play our brand of attacking football. Our philosophy was set in stone: no matter how many you score against us , we will score more.”

Hibs gained revenge by winning the next two titles