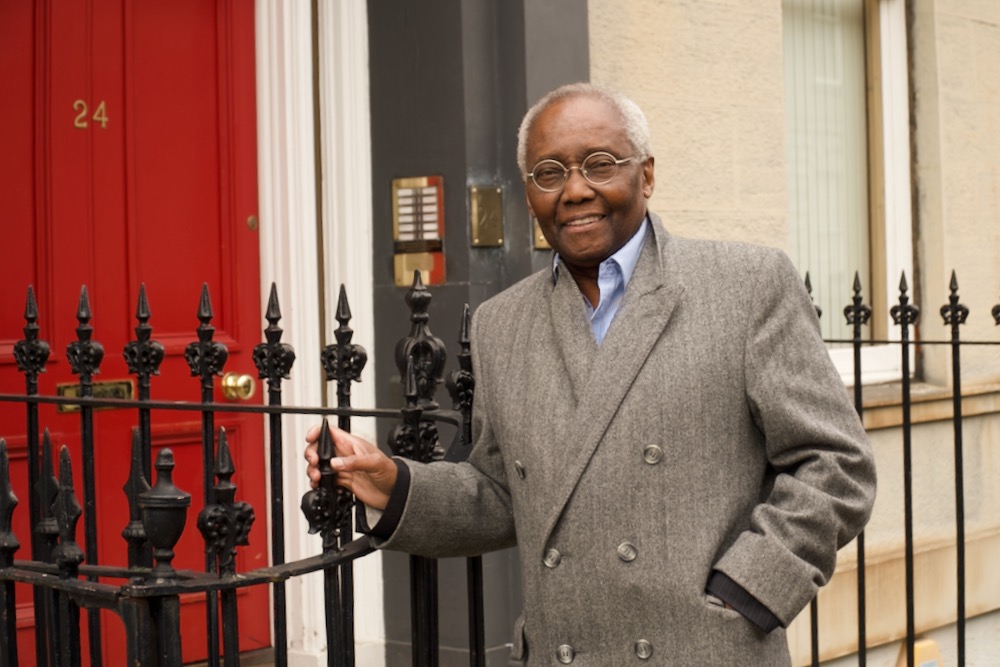 Recently I met with Sir Geoffrey Palmer in Forth Street at the east end of the New Town. There was a purpose in our meeting there. He had dropped into an earlier conversation with me that he had a fascinating story about a house in Forth Street which he had discovered during his research into slavery.

Sir Godfrey (but known as Geoffrey) Palmer OBE is a Professor Emeritus at Heriot-Watt University as well as a human rights activist. He was born in Jamaica and came to live in London just before his 15th birthday. He speaks out often against the slave trade is Honorary President of the human rights organisation, Edinburgh and Lothians Regional Equality Council (ELREC) which has its office on Forth Street.

So I agreed to meet him outside a house on Forth Street which, unusually for the street, has a Juliet balcony, unlike all others there, and he told me the story of this distinctive New Town house.

Palmer discovered that this house is mentioned in the compensation list which the University College London published. The records of the Slave Compensation Commission, set up to manage the distribution of the £20 million compensation to slave owners, provide a more or less complete census of slave-ownership in the British Empire in the 1830s.

The people named in these records form the starting point of the Encyclopaedia of British Slave Ownership. You can find those records here.

“But what are slave owners doing on Forth Street?

“So I immediately went down to 24 and stood in front of it. And it was quite worrying, but also awe inspiring, because there was a house which somebody owned, who received money for their slaves, and this is just next door where I pass quite frequently.”

Sir Geoff also made me look carefully at the front of the house at number 24 where there are decorative railings and neo-classical windows on the top floor which again don’t match the rest of the houses on the street. And then he marched me along to number 12 where the house has two front doors side by side. He believes this allowed the owners to have a separate entrance from their servants.

“What we would think today, and this is the thing about slavery, that a lot of people today, when we talk about it, a lot of people say that to me – and these are Scottish people. ‘How could this happen?’

“They feel that Scots could not have been involved with something like that. And I think this is the fascination of people with it, but there’s also a sense of a bit of embarrassment.”

The family name associated with 24 Forth Street was Crawfurd

But what really bothers him is the fact that historians don’t, in his view, tell the correct version of the story. He has been investigating this part of the story since 2007.

But Rodney Street is one of the most significant streets in Edinburgh as it is named after Rodney, the British admiral sent to Jamaica in 1782 with the Royal Navy to defend Jamaica against the French. Sir Geoff explained that the French had decided to control the New World by first taking Jamaica and then America. Principally they wanted to get control of the wealth as Jamaica was at that time providing massive wealth to Britain through the sugar trade.

Sir Geoff also explained that one of the largest slave owners who came from Leith was John Gladstone. He was born in Leith and his father was buried in Leith. His son was William Gladstone who was Prime Minister and whose constituency was Midlothian. There is a plaque in Leith to commemorate John Gladstone’s birth there. He had 2,508 slaves for which he received £83 million in today’s money.

He claims that we would not have been having this conversation in 2007 as it would not have been considered scandalous, but it is thanks to lots of work, including his own, to bring this to public attention that it has become of interest. But mainly he has an issue with the academic self-serving myth that academics created by talking about abolition rather than slavery or the Scottish involvement with it.

Listen to the podcast related to this article here.