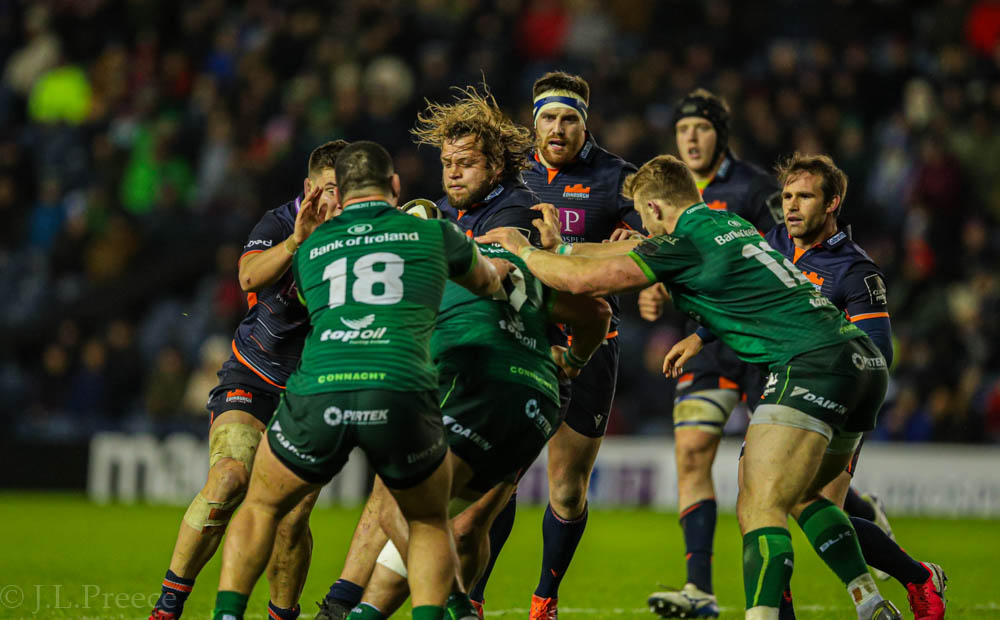 Being, as we are, in the middle of the Six Nations, this match would be a test of squad depth, as much as anything, as Connacht made the trip from wet and wild West Ireland to, the equally, wet and wild West side of Edinburgh as the teams lined up for their Round 12, Guinness PRO14 match at BT Murrayfield.

Getting underway in the gusty wind and swirling rain, it wasn’t long before the match ground to hault in a portent of things to come. A collision in open play lead to long delay as the doctor’s teams got to work to treat Connacht’s Finlay Bealham, before retiring the lock to the medical room.

Once play got back underway, it was another couple of minutes before the scoreboard was threatened when Simon Hickey slotted home a penalty to take the home side into a 3-0 lead after nine minutes. The conditions dictated that the kicker needed the ball held on the tee, and this was to be a feature for the remainder of the match.

The following 10 minutes, or so, then set the tone as a series of breakdowns and reset scrums was interrupted by the odd period of open play.

The next score, again came the way of Hickey’s boot in the 20th minute as the stand-off scored his second penalty for 6-0.

Then the first try. Turning over ball in their own half, the home side were quickly on the offensive and made ground against Connacht’s attacking-set defence. Once in the 22, the ball was popped up and centre, Matt Scott, was on hand to collect the pass and smash through.

He then charged the remaining distance to the line, crashing over under the posts. Initially, the TMO was asked to check the grounding, but as the replays replayed – seemingly endlessly – the grounding became less of an issue and a high tackle became the focus.

The decision was, eventually, made and a high tackle it was, resulting in a penalty try and a yellow card for the visitors’ Jack Carty. So, 24 minutes in and it was 13-0 to Edinburgh.

Connacht then enjoyed another period of possession. This came to naught, but then the match came alive.

Regaining possession, Edinburgh’s Simon Berghan made a long break down the right before being dragged down, but the loose ball was hacked through and into the goal area. Unfortunately, for the hosts, the ball just beat Edinburgh’s two chasers to the dead ball line.

As the half hour – although it felt like ‘the hour’ – mark passed, Edinburgh kicked for touch from a midfield penalty. The pack now had their chance and a series of rucks and pick-and-goes across the front of the line lead to Berghan, eventually, driving through for a try.

Once again, Hickey was good for the kick and it was now 20-0.

As the first half ground to a close, Connacht had worked their way into Edinburgh’s 22 and it was their forwards’ turn to come up with the goods. In a replay of the hosts’ try a few minutes earlier, it was, however, the backs who won through as Tiernan O’Halloran stole the glory with his try. Carty then kicked the conversion for 20-7 at the break.

The first try of the second half came the way of the visitors again. In what was now very much a rucking-and-mauling game as opposed to a running-and-passing one, their pack replayed their replay and drove through for their second try, O’Halloran, again, stealing the pack’s thunder and Carty, again, adding the extras for 20-14 just before 50 minutes played.

A bit of running-and-passing then ensued as, back in possession, Man-of-the-Match to-be, Pierre Schoeman made some ground mid-field, followed a few seconds later by Bill Mata – the lock crashing through bodies to get dangerously close to the line.

The following pack then piled in and proceeded to get back to the job in hand, Schoeman coming up with the goods as he burrowed through a pile of bodies to dot down under the posts. Hickey then supplied another two points and it was 27-14 just before the – actual – hour mark.

Then Edinburgh’s back division were granted a try via the, ever present, Duhan van der Merwe. Recycled ball around half way was sent through the hands and the final pass from George Taylor out to van der Merwe sent the winger on his way.

Tearing up the touch line, he was, eventually, tackled just short, but, at 6′ 4” and 16 ½ stones, he takes a lot of stopping. A bit of a pile up over the line and a lot of wriggling later, it was 32-14. Which was soon 34-14 as Hickey kicked the incredibly difficult conversion from the touch line.

With less than 10 minutes to go, Edinburgh’s Eroni Sau was carded for a tip tackle, leaving the home side to finish the match with 14 men. Or, so it appeared…

A ‘bit of a scuffle’ between the packs, a couple of minutes later, escalated into a bit more of a scuffle, which eventually ended with one of each side seeing yellow and a penalty for Edinburgh. So, 13 v 14…

Line out won, held up over the line – scrum. And another penalty try as the visitors couldn’t hold Edinburgh’s drive and collapsed to ‘award’ the try. With two minutes left, it was now 41-14.

That wasn’t quite the end, as replacement scrum half, Charlie Shiel made a break up the middle only to be tripped up mid side-step by Connacht’s Conor Fitzgerald in a desperate, if unfortunate, attempt to prevent try number 6.

His yellow made it 13-13 for the final few seconds as Edinburgh fiddled about a bit to let the clock run down before booting the ball off the field to seal the match 41-14 and cement their top-of-the-table spot in Conference ‘B’.