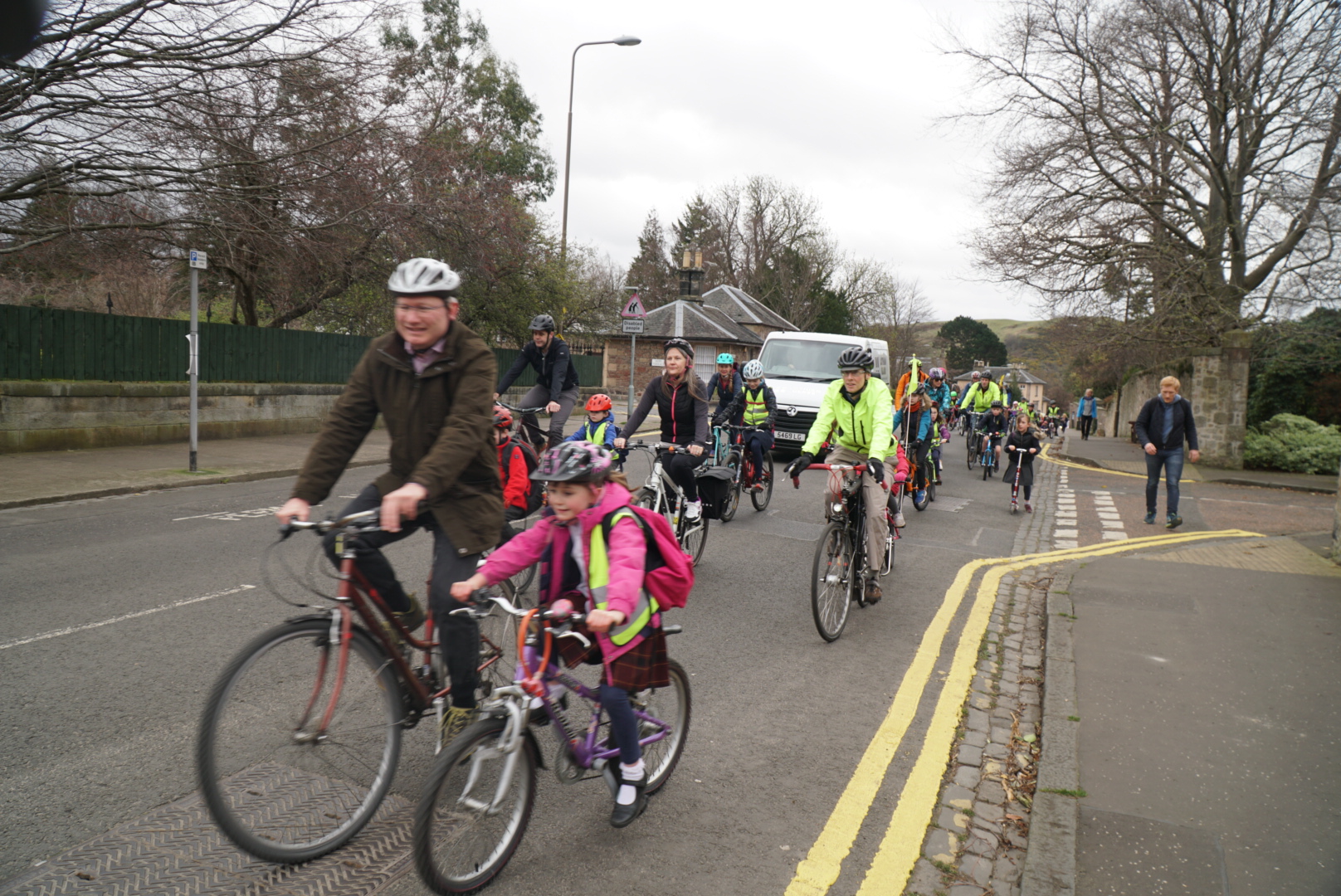 Claire Miller, Green transport spokesperson, lodged a motion at today’s Transport and Environment Committee to draw attention to the bike buses which take place around the city, in particular the group at Sciennes and James Gillespie’s.

A bike bus is a group of schoolchildren accompanied by parents and marshalls who group together at a starting point and then cycle, walk or scoot to school together. At James Gillespie’s they cycle from the junction of Blackford Avenue and Charterhall Road all the way up the hill, through the grounds of the Astley Ainslie Hospital every fortnight.

Before the motion was considered today a deputation made up of Ewen Maclean who is one of the organisers along with four of the keen young cyclists who all spoke to councillors to explain what fun it is to cycle to school.

One said: “It makes me feel happy. Please support the bike bus!”

Both Cllr Corbett and T & E Convener, Cllr Lesley Macinnes, are cyclists. They agreed that the weather may not always be the best for cycling to work, but the convener talked of her ‘sense of achievement’ during the winter months especially. She also said that while these groups are a very good thing she hopes that improved infrastructure will make the need for them diminish, and they will become the norm. Cllr Macinnes supported the motion saying, “We will build on this good work.”

Mr Maclean explained that even last Friday when the weather was at its worst two of his companions cycled to school in shorts. He also said that it would be helpful if the council could help to find good congregation points where the groups can gather together before the bike bus starts.

After the meeting Cllr Miller said: “I am delighted to have secured unanimous cross-party support to my request that the council supports volunteer run bike bus journeys to school.

“Everyone in the committee room enjoyed hearing directly from the children about all the benefits of the bike bus which they wanted to share with us including how much fun it is to cycle together. I’m looking forward to bike buses appearing in lots of different areas across Edinburgh if council officers and bike bus volunteers can help more schools to join in the fun!”

Ewen Maclean of Blackford Safe Routes said: “I am very grateful to Cllr Claire Miller for bringing the motion and in general to the Transport Committee for the very warm reception given to the kids from James Gillespie’s Primary School. The questions asked were very supportive including by Councillor Lang asking specifically how the council can help local community groups or schools who want to run bike buses, which is crucial to their success.

“Councillor Cook also asked whether the council could help by liaising with local businesses, for example, to provide spaces to congregate at the start of a bike bus in some cases. I hope that more bike buses will be able to use the council as a resource to facilitate their success. I am particularly keen that the council uses its powers to raise awareness of the bike bus phenomenon, so that when encountered people are aware of what it is and how to act.”

During the meeting Mr Maclean thanked Deans Properties who provide high vis vests for the Wee Unicorns at James Gillespie’s.

The motion below was unanimously passed by all the members of the T & E Committee. It is rare for something at this committee to get such universal support.

Look out for the bike buses at Sciennes Primary, James Gillespie’s and in Blackhall and Corstorphine.