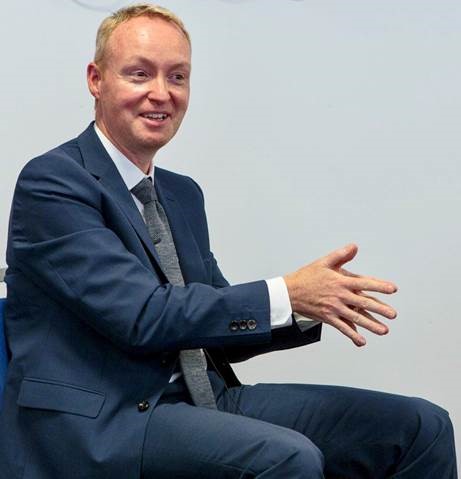 JPIMedia has announced that Frank O’Donnell The Scotsman editor will leave in May to take up a new role as editor-in-chief at DC Thomson’s Press and Journal in Aberdeen. The publisher also produces the Evening Express edited by Craig Walker.

O’Donnell leaves behind The Edinburgh Evening News and Scotland on Sunday as well as The Scotsman. But before he goes, he is being called upon to implement JPI Media’s Digital Acceleration Programme which aims to increase traffic to its websites.

This scheme has been trialled in several areas of England to such success according to JPI that they are going to replicate it here in Scotland. The model will include all the big Scottish titles like The Scotsman, The Edinburgh Evening News and The Falkirk Herald.

We have been told that this will mean that all correspondents roles like home affairs will not be replaced. Instead all journalists will become general writers except in areas such as politics, arts or transport. The emphasis will be on numbers attracted to websites and each member of staff will be given their own targets.

The online offering will work 24/7 to produce the latest breaking news with some obvious sports like rugby and football receiving most attention. It appears that today’s news came completely out of the blue to all staff who have not been previously consulted. No doubt the NUJ will have something to say about the restructuring, although no immediate job losses appear to be planned.

In an email to JPIMedia staff in Edinburgh earlier today from Jeremy Clifford, who is JPI’s editor in chief, and Ian Johnston, Group HR and Transformation Director, the move towards digital was announced : “We have primarily focused on increasing the amount of traffic to our websites, growing the number of loyal users and pages they are viewing while maintaining our print performance.

“All other weekly print titles will form part of the small titles unit that sits alongside the DA structure.

“Frank O’Donnell will lead the implementation of the Digital Acceleration model as the Editorial Director for Scotland before leaving us to join DC Thomson as the Editor-in-Chief of The Aberdeen Press and Journal.

“It is with regret that Frank is leaving the company having been instrumental in improving the performance and stature of The Scotsman portfolio as Editor and Editorial Director. The Edinburgh Evening News closed out last year as the biggest website in the company and with the best year on year print performance. As Editor of The Scotsman, Frank has overseen the rebuilding of the title’s political stature, modernisation of its Scottish news agenda and introduced a subscription paywall to the digital site.”

Frank said: “I joined The Scotsman in March 2000 and have held 11 different positions over 19 years.

“I am forever thankful for the opportunities and experiences the titles here have given me. I have travelled the world, covered the biggest stories and worked with many of the best journalists in Britain.

“I have made many great friends in my time here and will look back on this period with great fondness and with the certainty that our brands are in stronger shape for a sustainable digital future.”

The email ends with : “Frank will leave the business on Friday, May 8 and goes with our blessing, sincere thanks and best wishes for his future career. We will begin the search for a new Editorial Director for Scotland immediately.”

PressGazette has spoken with a Scotsman editorial source who related that many reporters at the paper are demoralised, and that the digital growth has despite the fact that the website constantly crashes and young journalists are paid a pittance.

Daily Business quotes circulation figures for The Scotsman of under 15,000 papers.

Richard Neville, Head of Newspapers at DC Thomson Media, owner of the Press and Journal, said, “I am delighted that Frank has chosen to join us at such an exciting time in the evolution of our news brands. He will bring fresh energy to the print product as well as leading the development of our digital offering in new and exciting ways.”

As Editor in Chief of Aberdeen titles, Frank will provide editorial vision for teams in Aberdeen and Inverness, working with The Press and Journal and Evening Express to ensure the titles maintain the excellent delivery of local, relevant content that readers and consumers expect.  He will also take on the Editorship of The Press and Journal, the UK’s highest selling regional daily newspaper.

Speaking of the appointment, Frank said: “I am excited to be joining DC Thomson Media in the role of Editor in Chief of Aberdeen.  The Press and Journal and Evening Express are historic and trusted brands with a strong connection to their communities.  This relationship is vital in the digital era as we develop a deeper partnership with our readers.

“I was attracted to this role by DC Thomson Media’s commitment to a sustainable digital future that will ensure these news brands thrive for generations to come.”

Frank has been a journalist for more than 25 years, and Editor of The Scotsman since April 2017, the title’s bicentenary year.  He joins DC Thomson Media in May 2020. DC Thomson reported disappointing financial results only last week. The Daily Business said that profits plunged from £86.4m to £21.1m, although The Press and Journal and The Courier are the largest selling regional dailies in the UK.

The Edinburgh Reporter wishes Mr O’Donnell well in his new job in the north.

JPIMedia was formed when Johnston Press went into administration in November 2018. This happened over a weekend when the bondholders agreed to reduce the level of their secured debt from £220m to £85m and the debt maturity date was set back to December 2023. At the time the company and its Chief Executive Dave King said the move would ensure employees’ rights were maintained and suppliers paid.

There was a question over whether some employees had lost pension rights. Although JPIMedia offered a defined contribution pension scheme to its employees, an assessment period had been triggered for Johnston Press’s own pension scheme. The National Union of Journalists criticised the loss of the pension scheme as a ‘serious blow’.

Any speculation about a possible new owner for The Scotsman appears to have gone quiet in recent times. In November when it appeared that Newsquest who own The Herald were in the running to take over the titles, the NUJ expressed their fears about job losses and called for a two year moratorium.