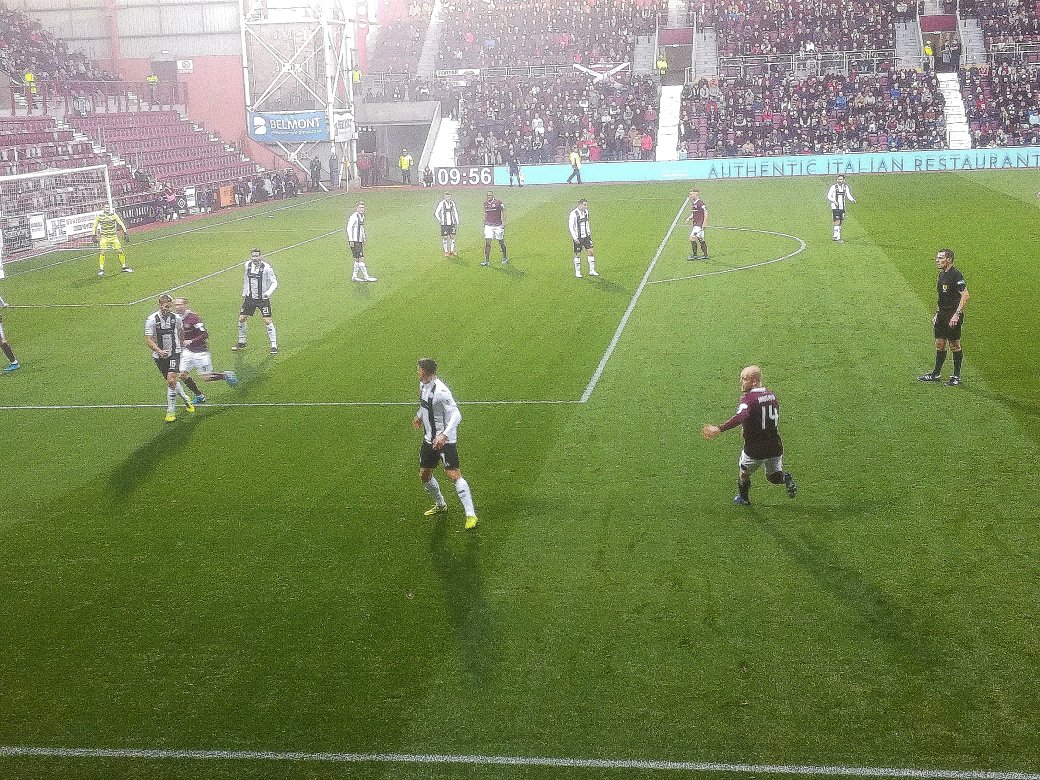 After nearly eight months without a win in the Ladbrokes Premiership at Tynecastle, Hearts finally tasted a league victory in Gorgie after St Mirren were put to the sword on Saturday. With Craig Levein relieved of his duties as manager, Hearts shook off the shackles of caution to record a vital win to move up the league table.

Austin MacPhee was in temporary charge as Hearts search for a new manager and he made five changes to the team that surrendered all too easily to Rangers in the Betfred Cup semi-final at Hampden last Sunday. Clevid Dikamona, Andy Irving and Uche Ikpeazu all returned to the starting line up while a huge welcome greeted the return of long-term injury victims Steven Naismith and Jamie Walker.

On a bitterly cold November afternoon Hearts made a bright start and, encouragingly, took the lead after just six minutes. A corner from Andy Irving was met by Steven Naismith who steered his shot into the net to great relief around most of Tynecastle.

Hearts looked bright and looked threatening going forward, not something that was always a feature of play under Craig Levein. However, the defensive frailties of late were still apparent and St Mirren equalised in the 20th minute when Foley’s cross was headed on by Andreu for Obika to smash the ball home.

One wondered how Hearts would react and it took them less than ten minutes to do so. Aaron Hickey’s throw-in was nodded on by Naismith for Uche Ikpeazu whose shot on goal cannoned off McLoughlin and into the net. Hearts back in front and surely lessons had been learnt about keeping things tight. Not so.

Just three minutes later, St Mirren were back on level terms thanks to more shoddy defending. Captain Christophe Berra seemed to be dreaming as a long ball came towards him. This allowed Mullen to collect the ball and despatch it beyond Joel Pereira to make it 2-2.

The tension was showing on the Hearts players and fans alike but there was more relief when the Maroons went back in front two minutes from half-time. Michael Smith crossed from the right and Oliver Bozanic headed the ball past Hladky to make it 3-2 to Hearts at the interval.

The second half was but a minute old when Hearts gave themselves some much-needed breathing space by adding a fourth goal. Smith, again, was the provider when his cross was headed powerfully home by the returning Jamie Walker who ran to the jubilant home support in the Gorgie Stand to celebrate.

This knocked the stuffing out of the visitors and Hearts assumed control of the game. They duly added a fifth goal 13 minutes from the end and waited to serve the best until last. The much-maligned Jake Mulraney collected the ball on the left, cut inside and curled a magnificent shot from 20 yards beyond Hladky and into the net for a quite superb goal. As stadium announcer Scott Wilson declared it was a contender for goal of the season.

The Paisley Saints tried hard for a consolation goal but a resolute Hearts defence stood firm and the Gorgie boys duly recorded their first home win in the league since defeating Aberdeen at the end of March.

It was far from a perfect performance from Hearts but it was all about getting a vital win today. The influence of Steven Naismith cannot be underestimated. The former Everton and Norwich striker marked his return to the team with a goal and he man-managed the Hearts team all around the park – including his captain Christophe Berra! As suggested by this this website back in January the role of player-manager for Naismith may well be a serious consideration for Ann Budge.

That said, Hearts today looked much more dangerous going forward under the managership of Austin MacPhee than they had done under Craig Levein and, for once, the Maroon Army left Tynecastle on a Saturday in fine fettle.

One swallow doesn’t make a summer  – but at least Hearts are beating again.

Top man: A close run thing between Uche Ikpeazu and Steven Naismith but the nod goes to the Scotland striker for his immense contribution to the team.