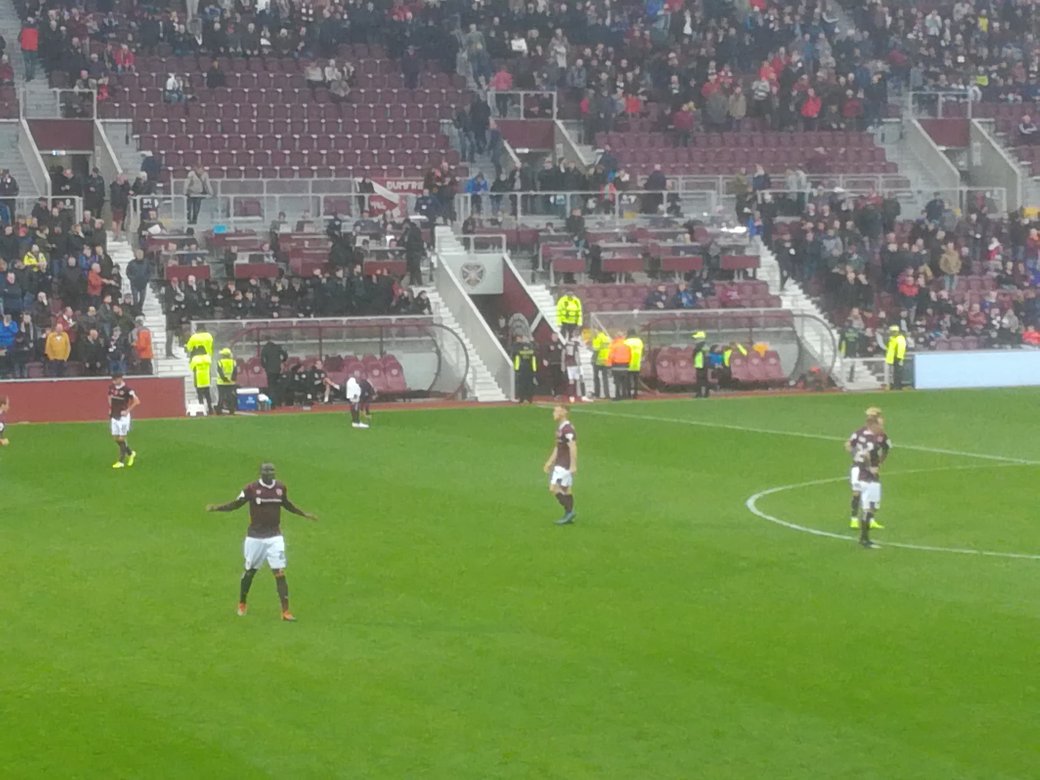 The Scots playwright Peter McDougall wrote a drama for BBC television in the 1970s called Just Another Saturday. Hearts supporters may well be feeling that today was just another winless Saturday as their team yet again failed to win a league game at Tynecastle. Kilmarnock, who have been Hearts bogey team in recent years, particularly in Gorgie, headed back to Ayrshire with all three points after another insipid display from the home team.

Those Hearts fans were scratching their heads an hour before kick-off when they discovered manager Craig Levein’s team selection. He made four changes to the team that drew a blank with St Mirren last week. Craig Halkett is out with a knee injury for 10 weeks while striker Uche Ikpeazu had a hamstring problem. Callumn Morrison and Steven MacLean were dropped to the substitute’s bench – an inexplicable decision which meant Hearts were to play without a recognised striker, something which Levein infamously did when he was Scotland manager in a game against the Czech Republic. With all respect, Kilmarnock aren’t in the same class as the Czechs so there were puzzled looks among many of the Maroon Army.

Backed by a noisy travelling support, Killie had the first real chance when Millar headed over the bar. Loic Damour had a chance for Hearts in the 20th minute but his shot was never going to trouble Killie keeper Branescu who was hardly overworked all afternoon. Given Hearts team selection this was hardly surprising.

Hearts best chance came after half an hour. Fine play from Clevid Dikamona down the right earned a corner. The ball eventually fell to Glenn Whelan, but the Irishman fired his effort into the Roseburn Stand and one sensed it was going to be one of those afternoons.

This thought was given considerable credence when Killie took the lead three minutes before half-time. Hamalainen was given the freedom of Gorgie Road to cross for veteran Burke who headed home, the attention of Jake Mulraney proving insufficient.

Someone must have made some coffee at half-time as Levein brought on a recognised striker in Steven MacLean who replaced Irving. Ryotaro Meshino did have a chance but his effort was straight at the Killie keeper.

There then followed a golden chance for Michael Smith to equalise, but he seemed surprised that Jake Mulraney had managed to deliver a decent cross and the ball bounced off the defender when he should really have scored.

Aaron Hickey then prevented Killie doubling their lead when he cleared off the line from Brophy as frustration grew in the home ranks. Substitute Olly Bozanic then had a chance to draw parity but he headed over the bar from 12 yards out when he had all the time in the world to pick his spot.

The final whistle blew moments later to yet another chorus of boos from the home support.  Their anger was shared by Craig Levein who let rip afterwards.

“I’m angry after that,” said the Hearts boss. “We didn’t do enough to win the game. If we look at the stats we probably had more possession and better chances, without having the balls to dig deep when we need it.

“Everybody on the field was waiting on someone else to change the game. Did they try? Arguably. Did they try hard enough? Absolutely not.”

“I’ve been at a point in the past four to five weeks where my job was to help the players with their confidence. I’ve reached the stage where I have some players coming back from injury and the message to the others was ‘don’t come knocking on my door if you’re not selected’ because they’ve had plenty of opportunities in the other players’ absence. Today they weren’t good enough.”

“You can try, or you can burst a gut, and the fans expect the latter. They can run and point to the numbers saying how much work they did, but when it’s difficult and the fans are on their back, they need balls to deal with it and too many felt sorry for themselves and went into a shell today.”

Perhaps the manager himself needs to admit that his team selection and tactics were like his players today – just not good enough. Hearts next game is in two weeks after the international break – against Rangers at Tynecastle. Optimism is not exactly in abundance in Gorgie…