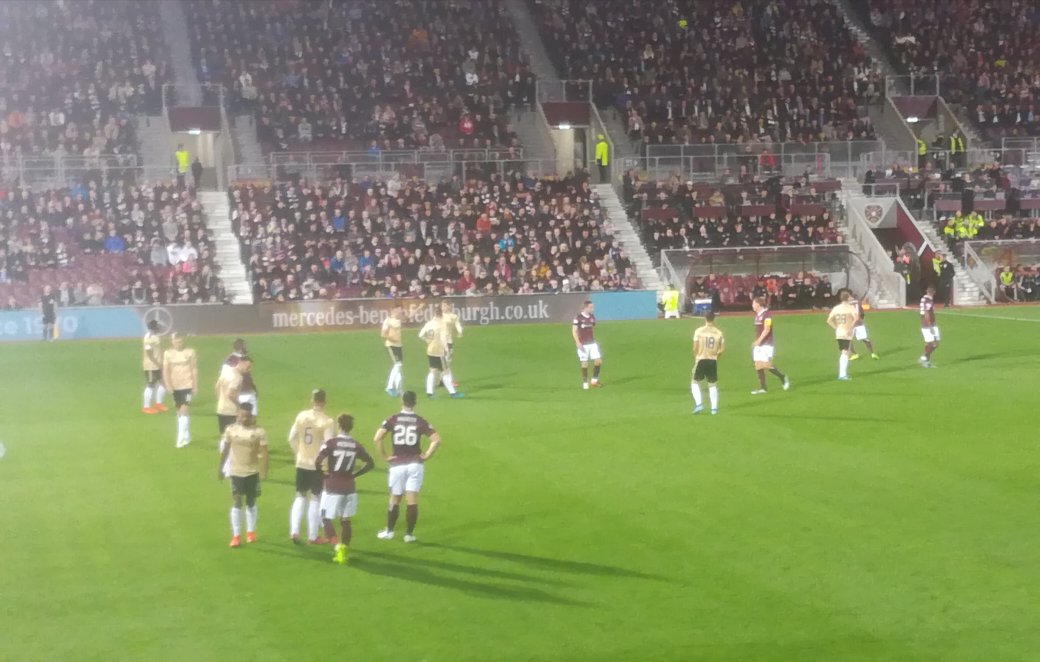 Hearts are heading back to Hampden after a pulsating Betfred Cup quarter final victory over Aberdeen at Tynecastle on Wednesday evening.

Craig Levein’s men did it the hard way, coming back twice from behind to force extra time which saw no further scoring. The Maroons then triumphed 3-0 in the penalty shoot-out.

After Sunday’s victory in the Edinburgh derby at Easter Road, Hearts sprang out the traps on a balmy autumn evening in Gorgie. In the opening minutes Uche Ikpeazu hit the Aberdeen crossbar before Meshino forced Dons keeper Lewis into a fine save.

However, Hearts defensive frailties came to the fore once more. In the 12th minute captain Christophe Berra fouled Hedges inside the Hearts penalty box. Cosgrove made no mistake with the resultant penalty and the Dons were ahead against the run of play.

Hearts deservedly drew level midway through the first half when the Dons showed their own defensive weakness when Devlin failed to deal with Damour’s cross leaving Steven Maclean with the freedom of McLeod Street to pick his spot to level the tie.

But the home side then gifted the visitors the lead again ten minutes later. This time Damour lunged in on Wilson inside his own penalty box. Yet again, Cosgrove converted the penalty.

Despite heavy Hearts pressure and Aberdeen looking dangerous on the counterattack it looked like the Dons would hold on for a 2-1 win. But then, in stoppage time, Jake Mulraney delivered a cross into the Aberdeen penalty box where Craig Halkett headed home to make it 2-2 and take the game to extra-time.

With no further scoring it was down to a penalty shoot-out.

Cosgrove may have scored two penalties in the first half, but he blazed his kick in the shoot-out high into the Gorgie Stand – as did McGinn. Hearts Glenn Whelan and Michael Smith made no mistake with their spot kicks. When Hearts keeper Joel Pereria saved Anderson’s kick it was left to young Aidan Keena to clinch victory with his spot kick. Hearts won the penalty shoot-out 3-0 – and will now face Rangers in the semi-final at Hampden Park on either 2nd or 3rd November.