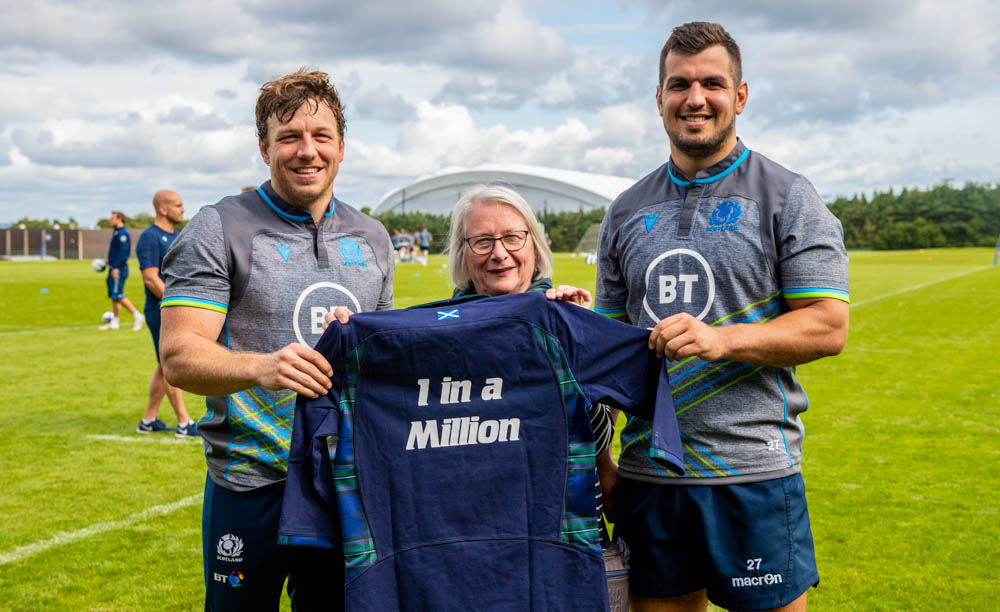 Scottish Rugby this week passed the one million ticket mark for fans watching Scotland matches at BT Murrayfield, since its run of 14 consecutive sell-out matches began in February 2017.

Kicking off with the Scotland vs Ireland match in the 2017 Six Nations on 4 Feb 2017 the team has played in front of capacity 67,144 crowds at the national stadium on 14 occasions and in lead up to the Summer Test versus France passed the one million ticket mark – the equivalent of 1 in 5 of the Scottish population passing through the turnstiles.

To mark the million-ticket milestone Scottish Rugby identified the supporter whose purchase of Scotland vs France tickets made them the holder of the one millionth consecutive ticket issued for BT Murrayfield since February 2017.

The lucky ‘one in a million’ fan was Isobel Kerr from Ayr.

Isobel was brought to Edinburgh this week, with her sister Fiona, to enjoy a surprise VIP experience and met the Scotland team as they trained at Oriam, before enjoying lunch with her favourite players.

A passionate long-standing rugby supporter Isobel has in recent years has attended Autumn Tests, Summer Tests, the Pro14 and Pro12 finals in Scotland, Scotland U20 and Edinburgh and Glasgow matches, usually joined by her sister and brother in law.

She was presented with a specially commissioned ‘One in a Million’ Scotland jersey by two of her favourite players Stuart McInally and Hamish Watson (top image) and will have the chance to meet the players again post-match on Saturday.

Isobel said: “The whole day was incredibly special. For a fan of Scottish rugby, it was a once in a lifetime experience to see the behind the scenes preparation the players are putting in. I feel so honoured, and extremely grateful to be given this exclusive access!”

“It was surreal to meet all the players and sit down to lunch with Stuart Hogg, Finn Russell and Stuart McInally. I couldn’t quite believe it was happening to me… but the atmosphere was so relaxed, and we had such a laugh.”

“You get an impression of the players viewing them from the crowd or on TV, but they are just as down to earth in person and so likeable. Finn Russell is exactly the same eating his meatballs and pasta as he is on the TV receiving his man of the match award!”

Isobel was also looking forward to seeing the team play again before they leave Scotland for Japan in only a few weeks’ time.

“It’s such an enjoyable experience being a Scotland supporter these days because the team is playing such a thrilling brand of rugby. That definitely rubs off on the fans and makes for a really special atmosphere at BT Murrayfield whenever we go.”

“I think a lot of Scotland fans appreciate the way the teams play. It’s simple – if they didn’t like it, they wouldn’t buy a ticket!

Scottish Rugby’s Chief Operating Officer, Dominic McKay said: “I am immensely proud to have reached this significant landmark in matchday attendance. I cannot thank our supporters enough for their loyal support of the Scotland team in recent years.

“We have worked hard to make our matchday experiences events the whole family can enjoy and we want to put on a show every time the team plays a home international at BT Murrayfield.

“To have passed the one million ticket mark on the eve of the forthcoming world cup demonstrates how much the team means to the country and how their exciting, committed style of play has captured the fan’s imagination in recent years.

“I know the players and coaches enjoyed meeting Isobel and her sister Fiona, they have travelled far and wide to see their team play over the years, so it was nice to repay that loyalty with a special day with the team.”

Scotland head coach Gregor Townsend said: “This is an amazing landmark and it was great to welcome Isobel to Oriam this week and spend time with her, she is clearly a very committed Scotland fan and supporter of the sport.

“We want to always play our best at BT Murrayfield and the players and coaching staff take real inspiration from having sell-out crowds getting behind us for our home matches, it means a lot to us and we work hard to ensure we can repay that support.”