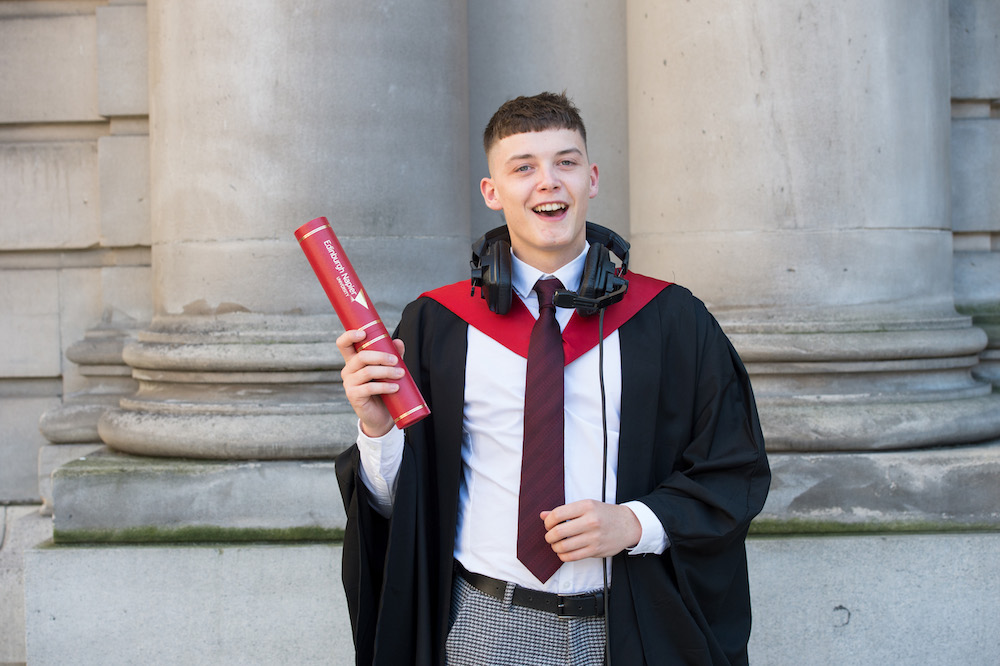 A young journalist graduated earlier this week from the university course shaped by his inspirational grandfather, which has given generations of talented Scots a pathway into the news industry.

Former Scottish Daily Express feature writer Bill Allsopp helped set up the journalism course at Napier College in 1976 and taught young hopefuls embarking on their careers there up until 1994.

When he died last August, aged 85, the journalist who had mingled with celebrities, hung out with gangsters and travelled the world in search of stories and adventure was remembered in colourful obituaries.

Bill’s influence lives on though with grandson Rory Hill, 21, today joining classmates at the Usher Hall to graduate from what is now the BA (Hons) Journalism course at Edinburgh Napier University.

Rory, from East Calder, West Lothian, said: “I was always very close to my grandpa Bill. He had lots of remarkable stories from his years as a journalist, and he was very good at telling them.

“He always said: ‘There’s nothing more important than the story’, and as I got older he would pass on his knowledge to me, including writing tips and interviewing techniques.

“He inspired me to pursue a career in journalism and I like to think that if he bestowed such passion in me long after he retired, he must have inspired those he taught and mentored both as a journalist and a lecturer.

“My grandpa always said he made the course very hands-on, and I feel this is still very much the philosophy as we were always pushed to source our own content, be independent and use our initiative.”

Rory, a former pupil at West Calder High, is now keen to develop his own career by getting more newsroom experience.

However, he is aware that the world of journalism is now markedly different from the print-dominated one his grandfather was so passionate about. During his four-year course, he has also had to get to grips with TV news, podcasts and web and magazine design as well as technical aspects of news production like mixing and editing.

Rory said: “Going into my final year without the support of my grandpa was extremely difficult as you can imagine, but overall, I feel it made me work harder so that I would make him proud.”

Allan Boughey, journalism lecturer at Edinburgh Napier, said: “Bill is one of the founding fathers of teaching journalism in Scotland, so it was naturally a real delight to have Rory study with us.

“Back in 1976, it was the only journalism course available in Scotland and was part of the UK-wide National Council for the Training of Journalists system. Over the years, thousands of trainee journalists have learned their craft on the course, many going on to achieve great things, here in Scotland and across the globe.

“So Rory is in great company and it’s absolutely fitting that he should have attended the course that his grandfather helped to establish. I hope Bill would be proud of the highly practical approach we still take – that’s very much part of his legacy here.”