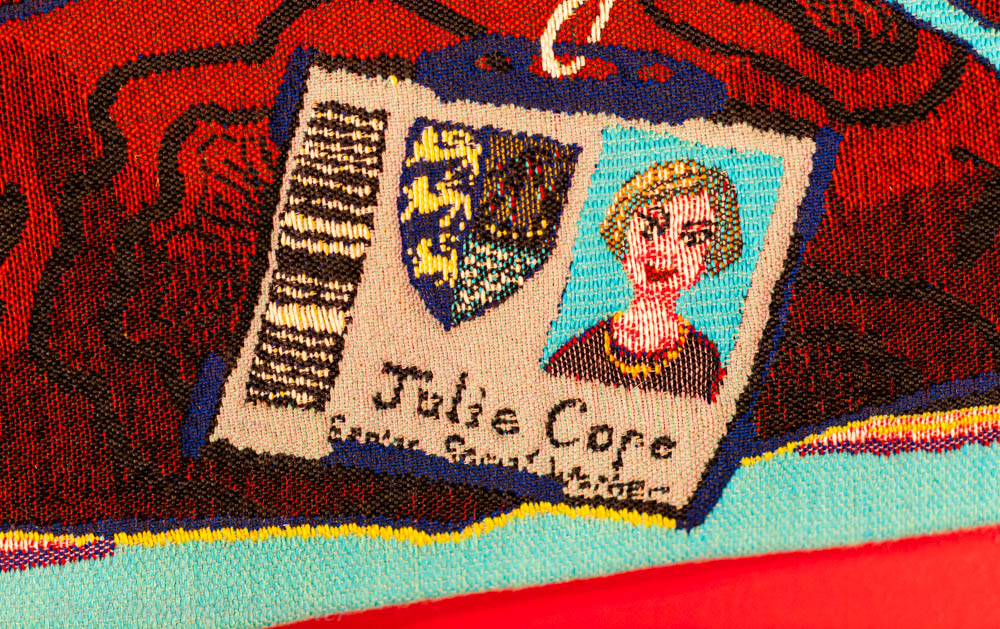 The groundbreaking work of popular artist Grayson Perry will be the focus of a solo exhibition at Dovecot Studios this summer. ‘Julie Cope’s Grand Tour: The Story of Life’ by Grayson Perry, which will open on 25 July as part of Edinburgh Art Festival, will mark the first solo exhibition in Scotland of the celebrated Turner Prize winner and self-titled ‘unapologetic fetishist’.

Julie Cope’s Grand Tour comes to Scotland for the first time, bringing the complete set of tapestries designed by Grayson Perry (b. 1960) for A House for Essex, giving Scottish audiences a chance to discover this extraordinary body of work.

The exhibition will explore the creation of the house, which was designed by Perry with FAT Architecture as a secular chapel dedicated to Julie Cope, a fictional every-woman. An artwork in and of itself, this real-life house and architectural marvel evokes the tradition of wayside pilgrimage chapels, and is located on the Stour Estuary at Wrabness.

The story of Julie Cope is told through four large-scale tapestries and an audio ballad spoken by Perry, which narrate key events in the protagonist’s journey from her birth during the Canvey Island floods of 1953, to her sudden death in a tragic accident. The exhibition will juxtapose large-scale tapestry and its associations of status, wealth and heritage with current concerns of class, taste, and social aspiration.

Perry is known for tackling subjects that are universally human, exploring identity, gender, social status, sexuality, and religion. By delving into the narrative of fictional Julie Cope, the artist explores in his own words, ‘the trials, tribulations, celebrations and mistakes of an average life’.

Using innovative digital processes of craft making, the imposing Julie Cope tapestries were machine-woven in collaboration with two international production studios. Designed by Perry using an interactive pen display, the compositions were then translated into coded instructions for a digital loom by Factum Arte, Madrid, and threaded and woven by Flanders Tapestries, Belgium.

A keen collaborator and advocate for contemporary craft, Perry has said, ‘What I stand up for is the relevance of craft in the information age. Some people think that craft is a nostalgic activity like knitting with grandma or throwing a medieval peasant pottery, I say craft is necessary and thriving more than ever.’

Set in the context of Dovecot Studios, one of the world’s leading tapestry studios, Julie Cope’s Grand Tour: The Story of a Life by Grayson Perry will offer the opportunity to explore both hand-woven and machine-woven tapestries as well as the different crafts, skills, and techniques used to produce these extraordinary works of art.

Kate Grenyer, Dovecot exhibitions curator, said: ‘It is indisputable that Grayson Perry’s popularity has opened up many museum and gallery visitors to the idea of tapestry; and our exhibition provides a context for this unique and beautiful medium to be examined and better understood.’

Celia Joicey, Director of Dovecot Studios, said: ‘Dovecot Studios is delighted to be giving Edinburgh audiences a chance to discover Grayson Perry and his affectionate creation Julie Cope. As the UK’s leading tapestry studio, we are privileged to be working with the Crafts Council and with the Art Fund to champion Dovecot and Scotland as the place to make, see, collect and learn about contemporary tapestry.’

Julie Cope’s Grand Tour: The Story of a Life by Grayson Perry will open on 25 July 2019 at Dovecot Studios in Edinburgh and is a Crafts Council touring exhibition.