Leith residents could enjoy more sunshine on Leith after proposals have been tabled to hand over The Shore to the public this summer.

Plans are underway to close the road to traffic, including buses, for up to three months over the summer. Any closure would be limited to daytimes – but opponents say any pedestrianisation could have “significant implications” for public transport.

Talks are still at an early stage but it is hoped that the trial pedestrianisation could be in place in time for the Leith Jazz and Blues Festival, due to take place from June 7 to June 9.

Initial plans to pedestrianise the Shore stalled in 2010 following a trial in September 2009 when cars were banned form the cobbled street for an afternoon.

Council leader Cllr Adam McVey, who represents Leith, said: “We’re at the early stages of exploring this and we need further discussions with residents, but keeping the Shore pedestrianised during the summer months would make it even more of a destination. It would allow businesses to spill out more onto the space and give more space for people to enjoy the area’s offering.

“Having spoken to lots of Leithers about it I know that there’s a lot of support for the idea locally but we’ll obviously need to do some wider engagement before we put a temporary traffic order in place.”

He added: “It will also need to be considered in the context of partners like the emergency services and Lothian Buses and make sure the scheme is coordinated with other planned events and works during the summer. Having met Lothian Buses and council officers on this, I’m confident we’ll be able to move forward.
“Making the Shore traffic-free would allow more of us to enjoy the good weather and make the shore a much safer and more pleasant place to spend some outdoor time in over the summer.”

City council officers will attend the next meeting of the Leith Harbour and Newhaven Community Council on April 23 to discuss the proposal in more detail.
Green Leith Cllr Chas Booth said: “This is a very welcome proposal, led by local businesses and community groups, to create a much more people-friendly space at the Shore.
“While there are further discussions to be had with local residents and the community council about the practicalities, such as timings, I very much hope we can make this idea happen in time for this summer.”
He added:  “I’d like to thank the local businesses on the Shore who have shown real leadership in pushing the council to consider pedestrianisation.

“I hope we can work together to make a success of the proposal, and show that human-friendly spaces can also be business-friendly too.”

But Conservatives have warned that the proposals were not included in initial plans for the council’s city centre transformation project – which could see pedestrians and cyclists given more priority over traffic.
Conservative transport spokesperson, Cllr Nick Cook, said: “The Shore is some way away from central Edinburgh and this idea was not presented to transport committee as part of the council’s city centre transformation proposals, which we know aim to shut down large areas to vehicles.
“Any major proposals such as those described would have significant implications for those using public transport to get to and from work everyday and should be subject to full scrutiny by councillors.” 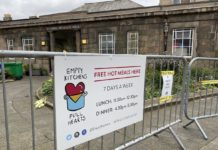