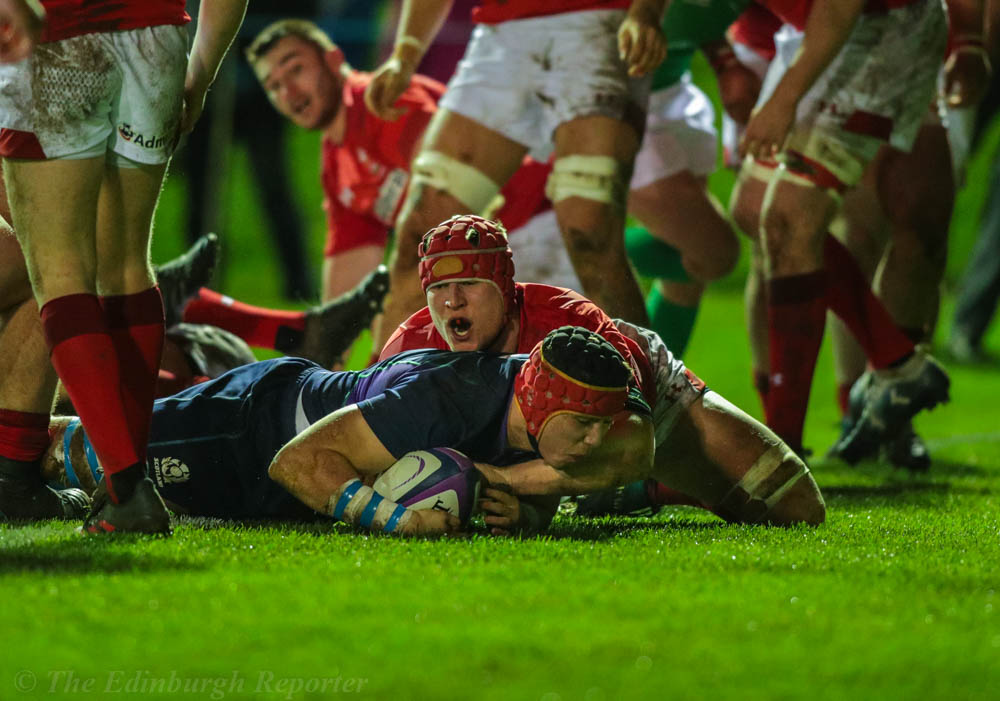 Friday night at Meggetland and a change of venue for Scotland’s last home fixture of the 2019 U20 Six Nations. Wales – who had beaten England last time out – were the visitors and they were hoping to capitalise on the host’s poor 2019 performances so far, while the Scots were looking to get their first win in this year’s tournament.

Six minutes in and possibility of that win had increased. Scotland were dominant from the start and an early scrum in the opposition 22 lead, after a couple of phases, to the first points being scored off the back of a ruck by flanker – and eventual Man-of-the-Match – Connor Boyle for 5-0.

The next ten minutes were, again, dominated by the home side. The Welsh had made some territorial gains, but the Scots’ defence was more than up to the challenge and the backs were using a blend of passing and kicking to gain ground.

However, it was another scrum in the 22 that gave the Scots a platform for try number 2. This time, the ball was run off the back by scrum half, Roan Frostwick, who drew in enough defenders to leave a gap for centre, Robbie McCallum, to fire through for the second try and 10-0. Ross Thompson then followed up with the conversion for 12-0 with 15 minutes played.

The Welsh then came more into the match and spent a fair amount of time deep in Scotland’s half, winning a couple of penalties and seeing Scotland’s No. 8, Kwagga van Niekerk, carded for holding on in a ruck near the line.

Once again, going for touch, the visitors eventually lost the ball to a ruck infringement of their own, allowing Scotland to clear.

They did manage to score through the boot of stand off, Cai Evans, who took advantage of ‘location’ to slot home two kicks on 30 and 35 minutes for 12-6.

As the half was drawing to a close, the home side were, once again, on the offensive and it was another well placed kick that saw the third try home. With the pack making inroads up the middle, the defence was, again, narrow. Thompson then saw the space wide and floated a fine lob into the goal area for wing, Rory McMichael to pluck out of the air and, effectively, fall over for the try.

Ross Thompson then followed up with a successful conversion in the swirling wind to take the half-time score to 17-6 to Scotland.

The second half started with more of the same for Scotland. Up to a point…

Thompson drew the home side further clear with a 48th minute penalty for 20-6 before Jack Blain scored the fourth try for the Scots.

Once again, it was ‘gap creation’ that lead to the try. Space made in the middle allowed the winger to run onto a pass and, with nobody in front, gallop the 30-odd metres to the line. Thompson missed the kick for goal, but it was 27-6 with just under 30 minutes left to play.

Scotland continued to dominate for a while, but Wales were gradually working the ball up into Scots’ territory.

A couple of nasty looking injuries for both sides lead to a raft of personnel changes which seemed to suit the visitors better and they began to assert significant pressure, with centre, Max Llewellyn, almost getting replacement, Sam Costelow, clear but Thompson managed to get back to haul the Welshman down.

That ‘point’ had now arrived but it wasn’t until the dying minutes of the game that Wales managed to cross the whitewash. Twice…

Their first try came from a pack blitz on the Scot’s line, substitute front-row, Will Griffiths, driving over for the try, followed up by Evans’ conversion for 27-13.

The second came as a, clearly tired, Scottish side watched Costelow amble in, successfully this time, from miles out on the stroke of full time for try number 2 – again converted by Evans – for a final score of 27-20. 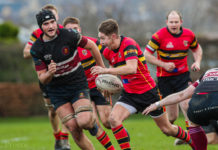