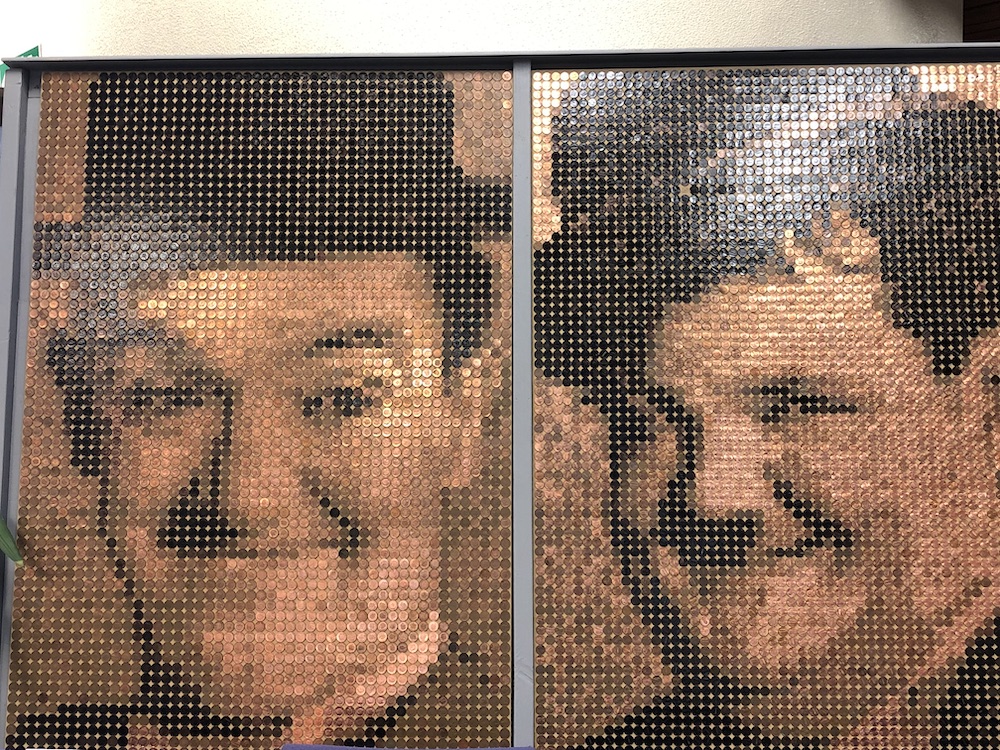 Hippfest 2019 the silent film festival begins later this month so to whip up some of the excitement the local library have a Laurel and Hardy exhibition opening tomorrow.

Two portraits of the movie stars will go on display at Bo’ness Library until 26 March just after the end of the film festival.

Commissioned by Julian Pickford to celebrate the release of the Stan and Ollie film these two portraits measure 150cm by 100 cm and are created from coins representing the home country of the duo.

The first film ‘the boys’ appeared in together was The Lucky Dog (1921). However, it was not until The Second Hundred Years (1927) that the two were officially billed as a comedy duo.  Legendary director Leo McCarey began supervising the production of their films with this title and is the man most often credited with the inspired notion of making Stan Laurel and Oliver Hardy a permanent team. Stan Laurel partly grew up in Scotland and, as a teenager, had his first professional performance at the Panopticon Music Hall in Glasgow. Laurel & Hardy’s Scottish connection also extends to their supporting cast, as Scottish actor James Finlayson, from Larbert, with his trademark double take and raised eyebrow stare, starred alongside the comedy duo in such films as Do Detectives Think? (1927), Flying Elephants (1928) and Big Business (1929).

Alistair Young, a relative of the late James Finlayson said: “It is a pleasure to be part of this Festival and to be invited to open this exhibition. For me, James Finlayson was a local hero and comedy genius who made my grandparents proud and brought immense joy to fans of Laurel and Hardy worldwide.”

Julian Pickford said: “To all visitors to Bo’ness Library and to the Hippodrome Silent Film Festival, I hope that you enjoy and appreciate these wonderful works of art that were produced for me by my dear friend Ed Chapman. Remembering those days after school when the two of us, just nine year old boys, would howl with laughter watching our comedy idols, Stan and Ollie, really does bring a tear to my eye.”

Alison Strauss, Arts Development Officer (Film and Media / Festival Director) Falkirk Community Trust said: “We are delighted to display these unique portraits as part of HippFest for everyone to enjoy.  We all need more Laurel and Hardy in our lives.

“Even after all these decades their films never fail to raise the roof at the Hippodrome and their legacy continues to inspire artists, like Ed Chapman, performers and cinema fans.  These impressive works are just one expression of the enormous love that the world still has for Stan and Ollie and we are very happy to indeed to put them on show.”