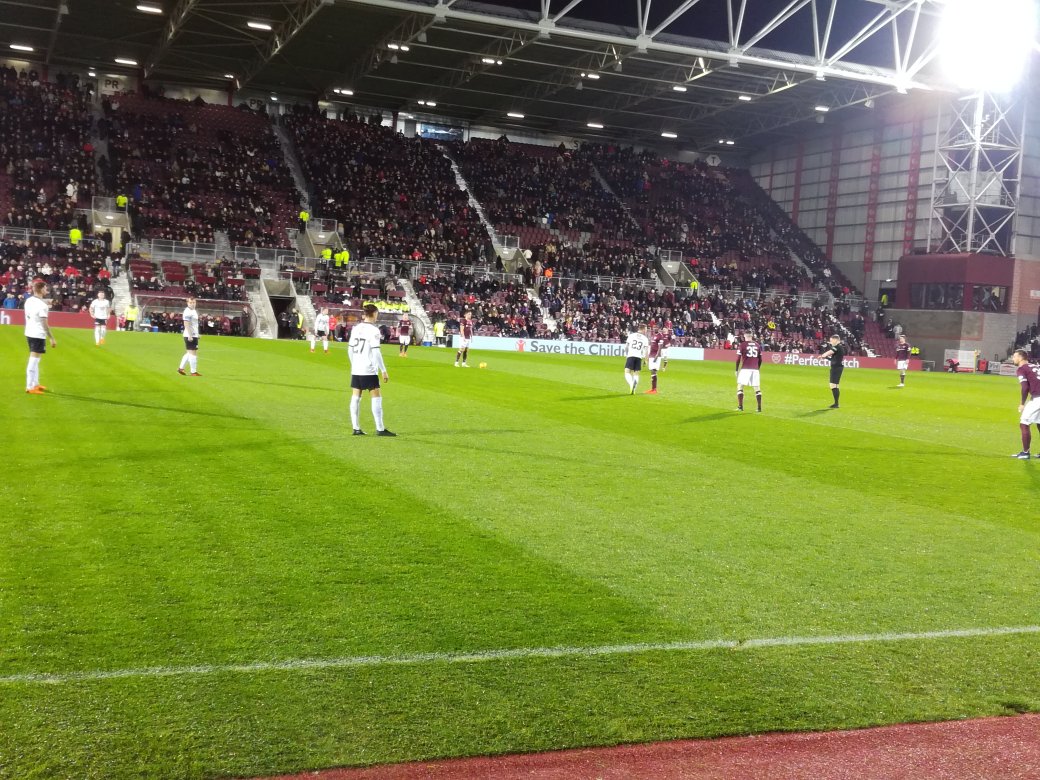 Hearts resumed Ladbrokes Premiership business at a freezing Tynecastle Park tonight as they took on bottom club Dundee. However, it was an evening to forget for the Tynecastle faithful as the visitors, without a win since 5th December, deservedly took all three points after an all too familiar dismal showing from Hearts.

Hearts boss Craig Levein made two changes from the team that edged past Livingston in the Scottish Cup last Sunday. Steven Naismith’s suspension meant an enforced change and gave the opportunity for young Aidan Keena up front. Ben Garuccio was replaced by Demi Mitchell.

Those at the SPFL who decide that a full midweek card of Premiership games should take place on a January night a month after Christmas surely must have their judgement questioned. There was a lower than average attendance at Tynecastle with just around 250 hardy souls travelling from Dundee. The atmosphere was muted to say the least. Whether this affected the home players it’s hard to say but the opening period set the tone for the rest of the game – long, high aimless punts, misplaced passes and a general lethargy from those in maroon.

Hearts keeper Colin Doyle saved well from Nelson and Curran as the visitors took the game to their hosts, much to the chagrin of the home support.

It took nearly 20 minutes for Hearts first decent chance when a rare passing movement let Arnaud Djoum free but his shot on goal was well saved by Dees keeper Dieng.

It was no real surprise when Dundee went ahead in the 24th minute. Kusunga linked up well with Nelson before firing past Doyle and Tynecastle was stunned. It was the first time Hearts had conceded a goal in nearly 300 minutes.

Hearts new boy David Vanecek appeared to have the tactical awareness of a chicken with no head and was clearly struggling. His frustration increased when he received a booking from referee John Beaton for a late foul leaving Craig Levein an angry man. Levein isn’t a person to upset – he substituted the Czech Republic player after just 33 minutes, Steven MacLean being the replacement.

MacLean’s presence at least perked up the Hearts attack and with five minutes left of the first half, the Maroons equalised with a curious goal. Olly Lee fired in a free-kick on the left wing which hit Dundee defender Jesse Curran and the ball sailed over keeper Dieng and into the net. 1-1 and Hearts fans looked forward to their team sorting things out in the second half.

Sadly, for Hearts, the second half was pretty much like the first. Callumn Morrison raced down the right wing early on but his shot on goal was straight at keeper Dieng who pushed it out for a corner.

When Hearts did pass the ball – which was all too rarely – they did threaten and a fine move involving MacLean and Lee set up Keena, but the youngster fired his chance into the Gorgie Stand.

Then Sean Clare, hero of last Sunday sent in a cross that eluded both MacLean and Mitchell.

Inevitably, Dundee scored the winning goal in the 62nd minute and it was a calamity for Hearts on-loan defender Conor Shaughnessy. The Irishman got himself into a terrible fankle on the edge of his own penalty box allowing Craig Curran to take the ball before passing to Nelson who had the freedom of McLeod Street to drive the ball past Doyle from around eight yards.

And that, ladies and gentlemen, was that, other than the welcome return from injury for John Souttar early in the second half.

Not for the first time this season Hearts looked clueless all over the park. Far too many long, high and generally aimless balls forward to young Keena which was food and drink to the Dundee defence.

Callumn Morrison looked jaded; Demetri Mitchell confused, Olly Lee lethargic. As for David Vanecek who knows what he was meant to be doing. Even Christophe Berra looked out of sorts – it was that kind of a night.

Something which is happening far too frequently for Hearts fans liking…