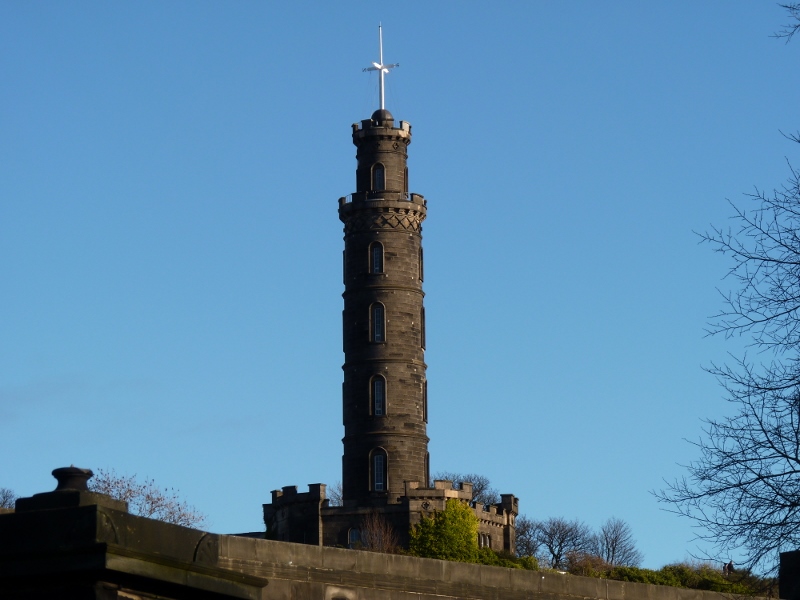 We 62 per cent Remainers, can hardly bear to watch the Battle of Brexit going on at Westminster.  It looks like one of the great turning points in our history, fixing our relationship with the rest of Europe and perhaps the rest of the United Kingdom. And yet we are hardly part of the struggle.  I wonder what sort of monument will be erected to this distant parliamentary battle ? And will it still be standing 200 years later, like Nelson’s Monument on Calton Hill in Edinburgh, built to commemorate the Battle of Trafalgar.

The architect Robert Burn designed the tower to look like an upturned telescope, as if he couldn’t bear to watch the outcome of the battle. The added anxiety for us today is that Scotland can only stand by in horror as the action unfolds at Westminster.  Our 59 MPs are swamped by the 591 from elsewhere. It’s true the 35 SNP MPs are the third largest party and, along with the 4 Liberal Democrats, they are all firm Remainers. They will push for a second referendum. But who knows what the rest will do.  The next few days may tell this historic story.

Meanwhile, we have all been watching our former First Minister and independence warrior Alex Salmond claim a historic victory against his own SNP government.  He took the government to court over the way it handled an investigation into allegations by two women that they were sexually harassed by Mr Salmond in 2013, while he was still first minister.  The judge, Lord Pentland, ruled that the investigation was unlawful, unfair and potentially biased because the investigating officer had had previous contact with the complainants.

Mr Salmond has always denied the allegations, which only came to light last year, after other harassment cases and the “Me Too” movement led to a strengthening of the government’s complaints procedure.  The case has also raised a number of awkward questions:  why has the police inquiry taken so long and why is it not yet complete?  Who leaked the complaints to the press?    What role, if any, has Nicola Sturgeon played in the matter?   Should the chief civil servant Leslie Evans resign in view of the court ruling and the fact that it has cost the government £500,000 in legal fees?

Outside the hallowed courts of law and politics, life has been getting back to normal after the Christmas and New Year break.  Schools have re-opened with the prospect of a teachers’ strike ballot hanging over them. Shopkeepers have been bemoaning the poorest Christmas season since 2008.  Train passengers are complaining about a 2.8 per cent rise in fares at a time when many services are being cancelled or overcrowded.  The government has given Scot Rail until 18th February to come up with an improvement plan or face losing its franchise.

The one service that is going well is Edinburgh Trams. Much doubted when they began operating in 2014, they have recorded another successful year. Passenger numbers are up 10 per cent and they’ve made a pre-tax profit of £1.6m.  This year, they are due to take on the maintenance costs and to pay the city council £8.5m for the use of the tracks and the depots.  Councillors will be deciding in March whether to extend the tram network to Leith and Newhaven which, it’s hoped, will double the number of passengers using the trams.

Out in the countryside, there’s new concern over how the fox-hunting ban is working.  The “sport” was outlawed in 2002 and instead farmers and gamekeepers were allowed to control foxes by using dogs to “flush” and guns to “humanely kill” foxes.  But now the rural affairs minister wants to close a number of loopholes in the legislation which have allowed a form of fox-hunting to continue. Rural Affairs Minister Mairi Gougeon says she plans to introduce a “two dog” rule to prevent packs of dogs being used and make landowners liable for any offence on their land.

The Gamekeepers Association says the new rules just won’t work and a rise in the population of foxes will be disastrous for livestock and wildlife.  So expect another round of the culture war between city dwellers and country folk which so divided the early days of the Scottish Parliament 20 years ago.

Finally, do you want to buy a mountain?  Ben Shieldaig (1,752ft) on the shores of Loch Torridon on the west coast is up for sale, along with its 3,886 acre estate and lodge, for £1.7m.  It’s a place of wonderful views, remnants of the ancient Caledonian pine forest, birchwoods, eagles, pine martens and otters.  Maybe you should just buy the lodge for £1m and leave the mountain and the estate to the Woodland Trust. The Trust is hoping to buy the estate and open it as a wildlife and countryside reserve.  It wants to double the tree cover and manage the moorlands for wildlife.

But first there is a fund-raising mountain to climb, with vision as well as views.