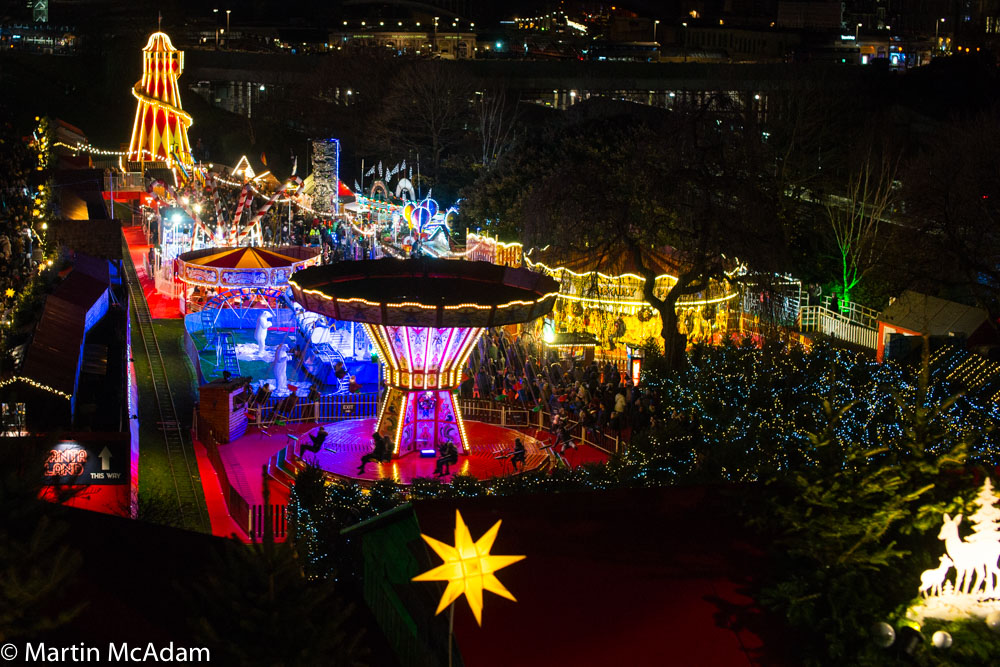 Edinburgh’s Christmas season gets under way later today in the city centre with entertainment galore all culminating in the switch on of the Christmas lights and a fireworks display from Charlotte Square.

The free family orientated community event brings the local community together and  showcases the very best choirs and dancers from Edinburgh and across Scotland as George Street lights up with fireworks. On The Mound the Christmas tree which is a gift from Hordaland County Council in Norway will also be lit.

Edinburgh-native Saskia Eng who competed on this year’s The Voice in both Tom Jones’ and then will.i.am’s teams will give a special performance and switch on the city’s Christmas lights, a moment marked by a fantastic fireworks display. Saskia attended the City of Edinburgh Music School from the age of 11 and has performed in front of many large crowds across the country.

Saskia said: “I feel absolutely honoured to be switching on the Edinburgh Christmas lights. It is not something I ever expected to be asked to do. The people of Edinburgh have always supported me and I cannot wait to be there with them all at such a special time in my home city.”

Hosted by Forth Radio’s Arlene Stuart, the event will take place against the backdrop of the magical Silent Light on George Street. Brand-new for 2018, Silent Light is a world first: fusing together the spectacular hit Street of Light from Edinburgh’s Christmas 2015 and 2016, with a silent disco to give you the ultimate street party! A festivity like no other which will have people singing and dancing underneath the architectural installation of archways festooned with thousands of lightbulbs synchronised to music on your headphones!

50p from every ticket sold goes to OneCity Trust, a charity fighting inequality and exclusion in the city. 26,000 free tickets have also been made available to over 50 charities working in Edinburgh.

This year’s special performances include a preview from the world-wide phenomenon La Clique Noël, coming back to Edinburgh with Part Deux which features fire-breather and sword-swallower Heather Holliday, aerialist Stephen Williamson, hosted by the one and only Bernie Dieter of La Clique and Little Death Club fame. Light Night will include a performance from a new cast member: sophisticated, gentleman-juggler Florian Brooks. La Clique takes place in Festival Square throughout December.

24 of the best choirs and dance groups from across Edinburgh and Scotland will be rocking the 4 stages from 3pm, with the total of 1060 artists! Expect a raucous and energetic performance from Scotland’s number 1 soul choir, Edinburgh’s Got Soul as well as Edinburgh Bhangra Crew who recently came second in TBC-U, a national Bhangra competition! Erskine Stewarts Melville School will present their Pipe Band and University of Edinburgh their Clarinet Choir. The fantastic NYCOS East Dunbartonshire Boys Choir and NYCOS Perth Boys Choir are bringing a group of almost 80 boys for a very special performance at Light Night whilst Edinburgh Ballet makes a very welcomed return to showcase the best young ballet talent in the capital. The afternoon will also feature two performances from Edinburgh-own The Phoenix Community Choir. Full line up is available at edinburghschristmas.com.

With songs by Grammy and Tony winning pop icon Cyndi Lauper, Kinky Boots is a fabulous musical celebration about the friendships and power to change the world which opens at Edinburgh Playhouse on 10 December. To mark the occasion, cast of Kinky Boots joins Light Night celebrations with a special preview of the show!

Edinburgh’s Christmas charity partner, NSPCC will be fundraising at Light Night to help children who’ve been abused to rebuild their lives, protect children at risk, and find the best ways of preventing child abuse from ever happening. Voluntary donations, make up around 90 per cent of their funding to help this great cause.

Ed Bartlam and Charlie Wood, Directors of Underbelly who produce Edinburgh’s Christmas said: “Family and community spirit are at the heart of Edinburgh’s Christmas and we cannot think of a better way to kick off the season than Light Night, a free, family-friendly afternoon filled with performances from local groups, hosted by the one and only Arlene Stuart and with a special appearance from Edinburgh’s own Saskia Eng. Join us for this special afternoon heralding the start of Christmas in the Scottish capital with a bang, and help raise money for our official charity partner NSPCC.”

The Lord Provost, Frank Ross, said: “Light Night is the perfect way to bring everyone in the city together to enjoy the community spirit of Christmas. Every year it showcases our talented young people and this winter, I’m proud to see Edinburgh’s own Saskia Eng lead the Switch-on.  Saskia wowed everyone who saw her on The Voice this year and I’m certain she’ll do so again this Sunday.

“The Switch-on will take place next to George Street’s Silent Light show, a brand new event which will be helping us fight inequality and exclusion in Edinburgh by supporting the OneCity Trust through proceeds from ticket sales.

“Underbelly will also ensure 26,000 free tickets are shared with over 50 charities working in Edinburgh, including the OneCity Trust. This will allow as many of our residents as possible to take part, especially those who are at risk of exclusion or deprivation.”

Paul Cockram, Head of Fundraising for NSPCC Scotland said: “We are thrilled to be involved in Edinburgh’s Christmas spectacular. The festival is a fantastic Christmas celebration and great fun for the whole family. We look forward to seeing lots of families at Light Night on the 18th November and we are really grateful for donations on ticket sales which allow us to continue the NSPCC’s work across Scotland fighting for every childhood.”

Members of the public are encouraged to leave plenty of time to arrive and travel by public transport if possible to avoid congestion in the city centre, the event is expected to be very busy.