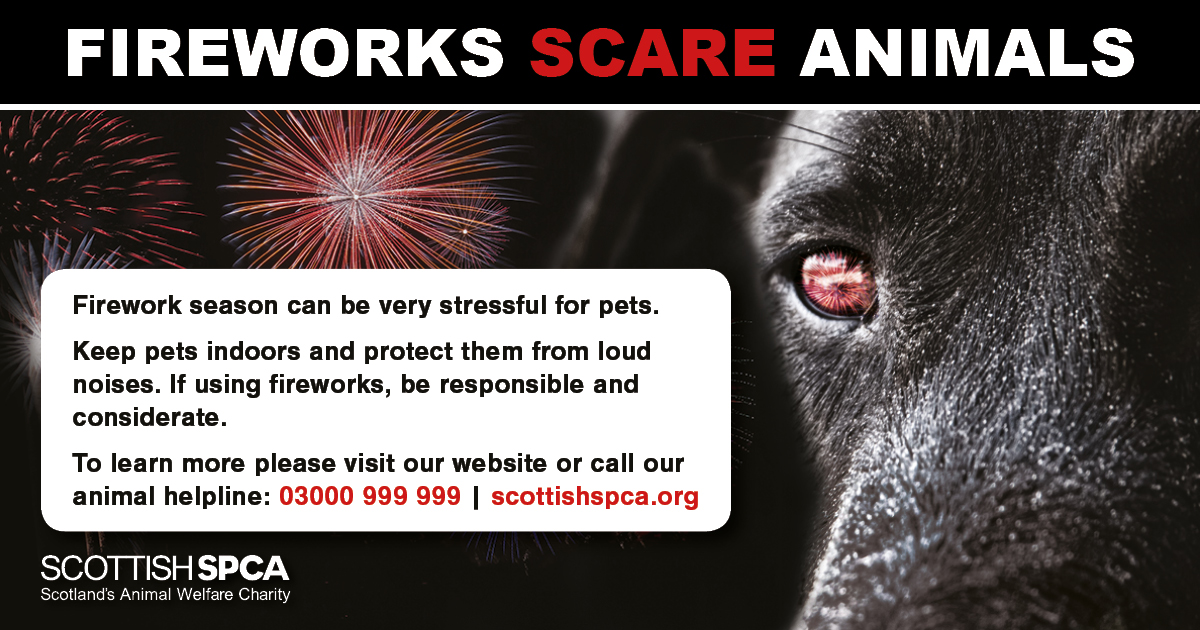 As bonfire night approaches, the Scottish SPCA is urging locals in Edinburgh and the Lothians to consider the impact of fireworks on the welfare of animals.

The Scotland’s animal welfare charity is reminding the public that fireworks season can be a very stressful time of year for both animals and pet owners who are trying to protect their animals from the fear and distress fireworks can cause.

Diane Aitchison, manager of the charity’s animal rescue and rehoming centre in Balerno said, “Animals have heighted senses and their hearing is much stronger than ours. A dog’s hearing is twice as sensitive as a human’s and a cat’s three times.

“The current legal noise limit for a firework is 120 decibels. To put this into perspective, a pneumatic drill measures around 100 decibels and people are advised to wear ear protection when exposed to anything above 80 decibels.

“We’ve been made aware of numerous incidents over the years where animals have come to serious harm and even death as a result of fireworks being set off near them.

“Animals will panic and flee at the sound of the bang and this can result in injury to the animals and even road traffic accidents.

“We’ve received reports of cats and dogs escaping as they look for a safe place to hide and sheep getting stuck in fences as they flee displays set off near their field.

“We’re also aware of incidents where farm animals have aborted their young soon after nearby fireworks displays.

“We’re encouraging the public to attend organised displays rather than set off their own fireworks. This will allow pet owners to take appropriate action to minimise the distress caused to their animals.

“If you do plan to set off your own display, then please inform your neighbours so they can properly prepare their pets.”

Information on the dangers of fireworks and advice on how to prepare for the upcoming season can be found on the Scottish SPCA online newsroom.