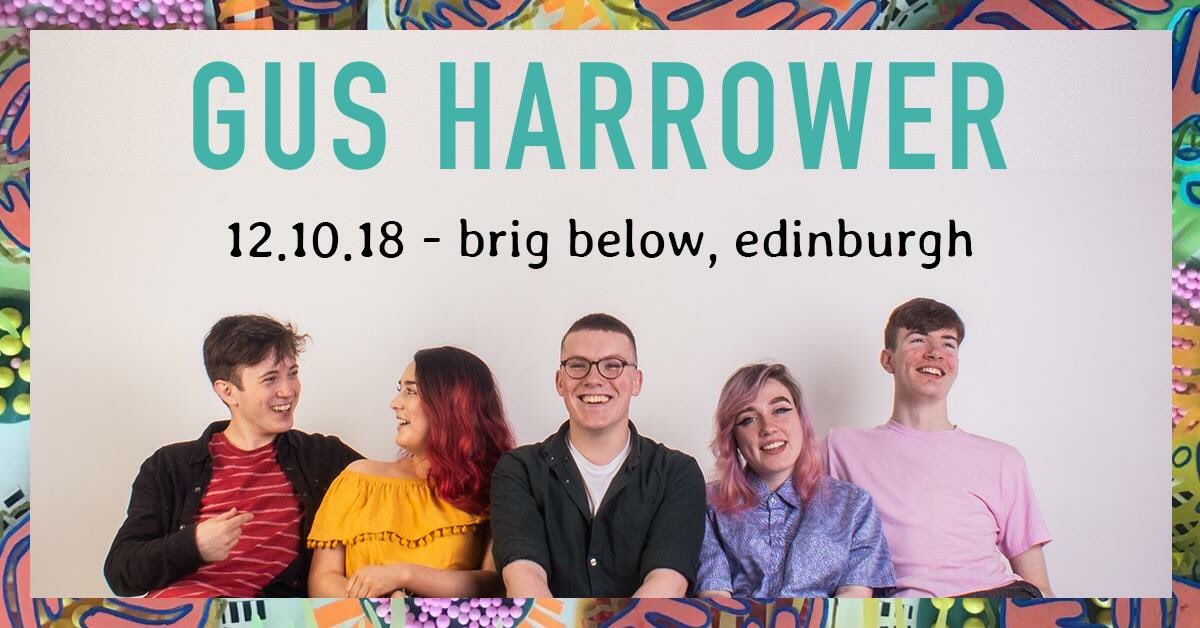 Gus Harrower at the BRIG BELOW, Friday 12 October 2018

The venue first. I’ve been in the Brig Below before and I remember thinking this is a great place. Just the right size for an intimate gig, but I did wonder what it would be like with a packed crowd.  It was great. I hate to admit it, but I’m fussy with my venues and I was impressed.

It was packed out but it all just worked. I picked up a drink at the great bar above and  settled down to watch the headline act for the night in a perfectly sized space that allowed me to see past the person in front.

Gus is a singer songwriter, but he’s not your normal, what you’d expect, earnest songs about broken hearts and broken bank accounts.

I’ve seen him before just sitting behind his piano entertaining me with a soulful style and easy manner. When I’ve seen him before with his natural musicality, he almost tricked me into enjoying earnest songs about, yes, you get the picture. He has an easy way and a fantastic individual style on the piano that means he can’t be compared to many other piano players. He just draws you into his songs.

Yes, I had seen and enjoyed him many times before so I was a bit anxious when I was asked to come along and see him with a band, full of drums, bass, saxophones and backing singers.

Well suddenly the whole shebang just daunder onto the stage, sit down and blast out the most rocking start to a gig that I had seen in a long, long time.

My attention was focused right on it and so was this band. The first song was ‘Heaven Awaits My love’ and it was ‘rockin’ with rhythms that picked you up and made you pay attention.

Thankfully, the band added to Gus’s unique songs with a lyricism and vigour that I haven’t seen in a band for years. His individualism was supported, pushed and backed up with the same easy style that I had seen in his solo gigs. The soulful melody matched the words so naturally that soon the audience was cheering and keenly waiting for the next song.

The next song blew me away but in quite a different way. This time the band and in particular the ‘backing’ singer caught my attention. They both added to the natural power emanating from the stage. It was all way too easy, far too natural and almost, dare I say enthralling.

The backing singer was Robyn Smith from Dunfermline. Another student from the Contemporary Music course at Edinburgh Napier University and another quite obvious talent in her own right.

The next song began with an entrancing pedal on his piano. This song was ‘Question of Love.’ Now although I had liked this song on his album, the performance took it to another level.

As the band slowly and subtly joined in I was in another world, listening to the honest lyrics, backed by another group of natural and talented musicians. I’ve admitted I’m already a fan of Gus and his easy piano playing, but I did feel in this song he didn’t quite get enough space to let it ring out on its own.

Gus didn’t need the next song, a cover, but the band excelled. Andrew Foley’s sax solo hit the same level of perfect balance and when Robyn Smith on vocals, took the lead, the crowd quite simply went wild.

I was one of that adulating audience and as she quite obviously got more and more confident, I couldn’t help asking myself when her own album will come out. Robyn is a natural talent with a perfect voice for any occasion.

Next came Gus’s own song, ‘Rosy’ and I think this sums his style and substance up in one. You could really hear his piano on this song, totally naked and played with a flair that belies his youth. Shut your eyes and you could be listening to any one of the great soul piano players from the fifties. I just wanted more and more piano from him.

‘Love is Just Like Water’, started with Colin Creadie on guitar and again showed off Robyn’s obvious vocal talents, with a pitch perfect tone and a sparkle that really does deserve a gig of her own. Compared with the rest of the set, this was lyrically his weakest but by the end even I was even singing along.

Another un-needed cover in the style of an ‘80’s Glasgow iconic band. It really wasn’t needed. So I’ll move on.

‘Deep Under’ was a lovely easy peaceful, yes peaceful number again perfectly backed and only improved by Robyn. The song built up the tension towards a beautiful and enchanting song end that had the whole audience eating out of Harrower’s busy hands.

‘Blinded’ was introduced as his new single, if 7” vinyl exists anymore and is my favourite from the album. As he swayed his way through this song it was so easy to be drawn into this young, dare I say it, singer-song writer’s, world.

It was so easy to be enthralled and enchanted. Ah there was Robyn again, singing with our star. She held her place on stage with an easy authority that you normally see in much ‘bigger’ or more ‘successful’ bands.  The song ended with the band stepping back letting Gus solo in his easy style and then……. Bang! they were back in with an epic end.

‘Wonder’ was the final number and suddenly it was all over, way too soon. The audience seemed to know this song and they backed him as though they had spent weeks rehearsing.

I, along with everyone was in the moment. What an end to a truly great gig, concert, event. The place was rockin’ and I was finding it hard to dance and write notes at the same time. Everyone was with him as he sang the encore.

So how do you sum up such a truly great gig? It’s true, though as naff as it might sound, sometimes, someone comes along and you just know they are destined, yes really destined, to be a star.  After this gig I was convinced.

So pay attention, listen up, ‘cos I’m telling you. This young man will be big. Gus Harrower. What a great night.